Last month, the Lake District National Park Authority (LDNPA) issued a statement declaring that off road vehicles would not be banned from the park, a move that has upset some locals who say dirtbikes and cars are ruining the countryside. 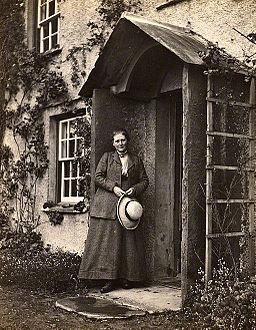 Courtesy of the National Portrait Gallery

Beatrix Potter by Charles King, May 1913.

**this article has been updated with new information.**

Named a UNESCO World Heritage site in 2017, the Lake District has welcomed a surge of visitors over the past twenty years, and not all sightseers have left the land as they found it: according to a recent report in The Guardian, off road vehicles, 4x4s, and dirtbikes are increasingly chewing up the delicate lands forged in the last Ice Age, damaging dirt roads and surrounding fields. Farmers complain that the roads are so poor that they cannot drive their equipment on them anymore.

A spokesperson for the Lake District said in a recent email that The Guardian's article "is inaccurate and, as such, we wrote to the editor in response. We highlighted that the headline Lake District heritage at risk as thrill-seekers ‘chew up’ idyllic trails is misleading and inflammatory, furthermore, parts of the article itself are factually incorrect. The two public roads are open to all users and make up just 0.09 per cent of our rights of way network, so to infer that this is a Lake District-wide ‘problem’ is misleading. Indeed, the overwhelming majority of people enjoying the national park’s 3,280km of trails are highly unlikely to encounter recreational motorists on these routes."

Lake District residents say the tension between meeting the wants of tourists while preserving the bucolic landscape is at least a decade in the making. In 2006, the LDNPA posted the now-ubiquitous red and white “hierarchy of trails” guides, notifying visitors of proper road etiquette, however local groups say these signs have only encouraged thrill-seekers to take their ATVs off roading. Members of the Save the Lake District Group say that vehicles using these roads have leapt from 90 a month in 2008 to over 400 in 2017. The LDNPA, meanwhile, provided usage data on its website saying that tracking motorized vehicles on the roads has been historically spotty and that the numbers quoted by Save the Lake District "may not be very reliable." The LDNPA report goes on to state that it has noticed a decrease on vehicular traffic on those roads that have been repaired.

The roads bearing the brunt of these adventure seekers are High Tilberthwaite and High Oxenfell. Part of the appeal lies in these roads’ proximity to Potter’s farm, which she purchased in 1929 and is now part of the National Trust. Meanwhile, the LDNPA maintains that the Lake District trails have historically been a mix of dirt, asphalt, and stone, and that recent severe weather has deteriorated the roads that now require repair. Paving these highly trafficked roads would keep motorists from destroying the surrounding area, and the LDNPA posted before and after images of repaired roads on its website, where some of the “before” roads look downright impassable, but Save the Lake District maintains that these pictures aren’t telling the whole story.

Earlier this month, LDNPA committee members voted not to ban ATVs from trails despite a recommendation from the International Council on Monuments and Sites suggesting that banning these vehicles would drastically improve the quality of the trails and preserve the beauty of the area. The latest vote has lead to frustrated protests and angry outbursts from locals, who fear that this is only another step towards stripping the Lake District of its charm and turning it into a roadside attraction.

The spokesperson counters that the LDNPA is trying to meet the needs of all park users. "As a national park representing everyone’s right to enjoyment, the decision to restrict anyone’s right to use these roads must not be taken lightly. In line with government guidance, legal intervention through a TRO (Traffic Regulation Order) is a last resort and we should explore other management options first. We completed a comprehensive evidence gathering exercise and the findings were presented to our Rights of Way Committee on 8 October where Members decided on the future management of these roads and whether or not a TRO is required.

"The decisions we have to take are often complex, but we do this in an open and transparent way so that everyone can see in detail what the perceived issues are, how we’ve gathered our evidence, and how we’ve come to the reasoning behind our recommendation to committee," the spokesperson wrote. The committee's findings can be read here.