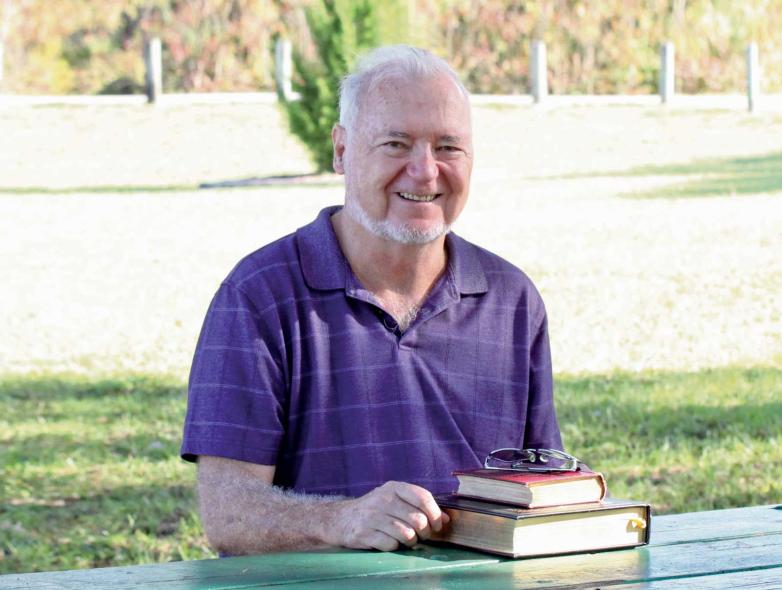 Earlier this week, we learned the sad news that Florida book collector Jerry Morris, whom we profiled in our winter 2015 issue, has passed away. His friend and fellow Florida Bibliophile Society (FBS) member Gary Simons wrote:

Jerry Morris, a passionate collector of books on books and materials related to Samuel Johnson, passed away on Sunday, April 3rd. Jerry was a long-term stalwart in the Florida Bibliophile Society and a consummate blogger…. He was stricken at the Florida Antiquarian Book Fair, in his milieu, in the midst of books, book lovers, book collectors, and booksellers. He will be sorely missed.

I didn’t start collecting books until 1985. I was thirty-eight years old and stationed at RAF Mildenhall, about seventy miles north of London, and serving my last overseas tour in the United States Air Force. England in the late eighties was a fantastic place to start collecting books, and it’s where I earned my nom de plume: moibibliomaniac.

My book-hunting grounds spanned from London to Oxford to Cambridge to Norwich to Bury St. Edmunds, and to all the bookstores in the countryside within a day’s drive. I should mention my weekend in book heaven: Hay-on-Wye, Wales.

Inexpensive dictionaries and quotation books are what I first started collecting. Then Samuel Johnson caught my eye—or rather a volume of his Idler essays, it was. Not long after that, my wife found Sonnenschein’s Best Books on a bargain table in a bookstore in Clare, England. And ‘books about books’ became my biggest passion.

I was fortunate to have Faith Legg, a bookseller in Eye, England, as a mentor. With her guidance, I was building not so much a collector’s library, but a reader’s library. I was more interested in what was inside the book. I bought and read almost everything except science fiction.

My pinochle partner, Rick Arlotta, built a sewing press for me at the hobby shop on base. Soon I was buying collectible books in need of repair at greatly reduced prices. I still have a hurt book or two from yesteryear in need of repair, which I shall do before I am old and gray.

I developed bypaths in my book collecting when I returned to the United States in 1989. Collecting dictionaries led to collecting grammar books, which led to collecting multiple copies of early editions of The Elements of Style by William Strunk, Jr. and E. B. White. Collecting Samuel Johnson led to collecting books by and about Johnson collector Mary Hyde. And my books about books collection … Well it covers an entire wall of my library and more.

By way of personal note, I’d like to add that Jerry was always warm, welcoming, and encouraging to fellow bibliophiles. Twice he invited me to speak at the FBS, once when my book was published years ago, and more recently via Zoom presentation. We exchanged emails often, and I always appreciated his support of me and of Fine Books & Collections. Our condolences to Jerry's family and friends, far and wide.