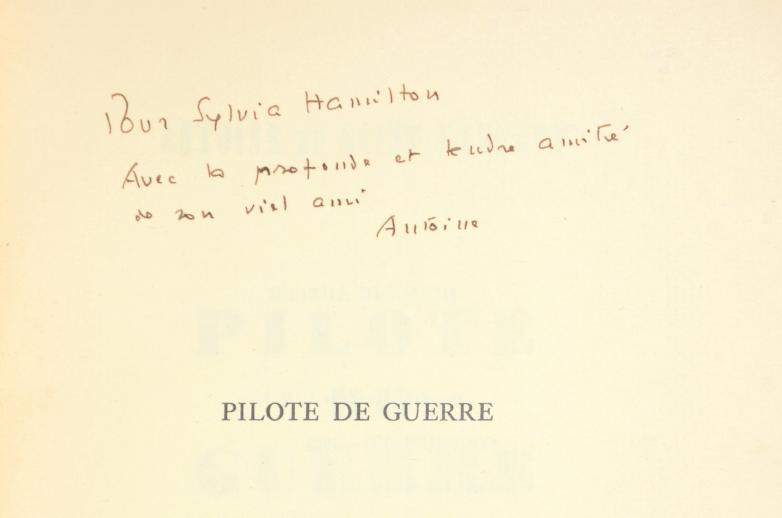 A first edition copy of Pilote de Guerre by Antoine de Saint-Exupery inscribed to the muse for his novella The Little Prince is among a collection of association copies on show at this weekend’s Firsts – London Book Fair.

It is included in London rare book specialists Peter Harrington’s new catalogue Only Connect, which focuses on writers’ relationships through presentation copies of their letters and books.

The copy of the 1942 Pilote de Guerre – simultaneously published in English as Flight to Arras – was a gift from Saint-Exupery to Sylvia Hamilton, inspiration for the fox in the book and whose doll was the model for the little prince himself. “Pour Sylvia Hamilton, Avec la profonde et tendre amitié de son vieil ami, Antoine,” he wrote.

Firsts’ theme this year is Banned Books. Pilote de Guerre was prohibited by the Nazi regime and the Vichy government because of Saint-Exupéry’s support for Jewish pilot Jean Israël.

Other items of similar interest in the catalogue include:

* A first edition of Ian Fleming’s Thunderball inscribed to his friend Noël Coward: “To Noël, In exchange for the copy of P & C he didn’t send me! With love Ian.” This refers to Noël Coward’s only novel, Pomp and Circumstance (1960), which includes a barely disguised caricature of Fleming

* An archive of letters sent by Neal Cassady, the model for Dean Moriarty in Jack Kerouac’s On the Road, from reformatory school to his early mentor Justin Brierly

* A copy of A Passage to India in which its author E.M. Forster wrote “my mother’s copy” after her death

Said Sammy Jay, Peter Harrington’s literature specialist who curated the catalogue selection: “Especially in today’s hyperconnected yet increasingly lonely world, the quest to make real contact with one another remains essential, in life as in literature.”

Firsts runs September 15-18 at the Saatchi Gallery in London. Highlights of the catalogue will be on display at Peter Harrington’s Dover Street shop until September 30.