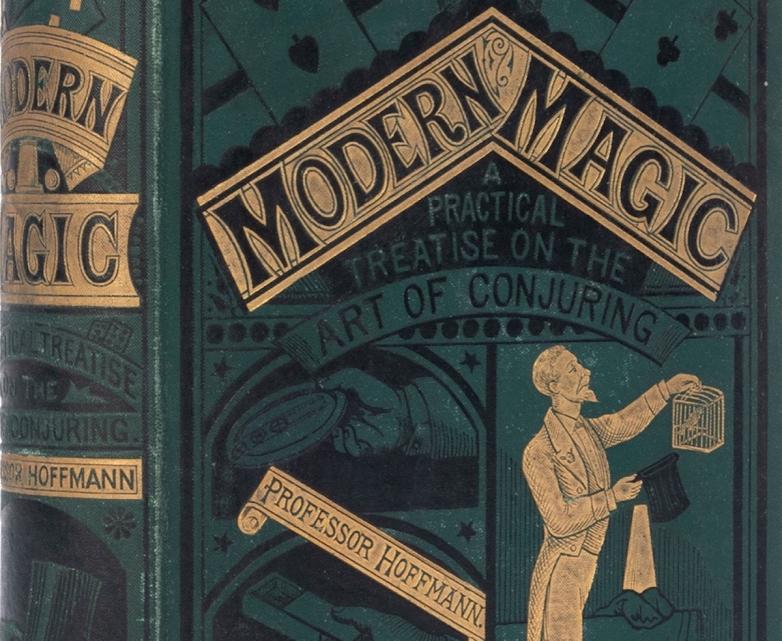 Chicago — Potter & Potter Auctions is pleased to announce this 450 lot sale to be held on Saturday, December 11th starting at 10am CDT. The event will be held online and live streamed, with a limited number of bidders physically allowed in the gallery as determined by current Illinois public health attendance guidelines. Please call the auction house, located at 5001 W. Belmont Avenue in Chicago, at 773-472-1442 to reserve seats, with first come, first served. Bidding will take place through Potter & Potter's website, at www.potterauctions.com. Phone and absentee bids are also welcome.

Items with ties to mentalist Joseph Dunninger (American, 1892-1975) feature prominently in this early winter event.
·       Lot #21, a Dunninger scrapbook and research archive, is estimated at $1,500-2,500. The scrapbook consists of c. 400+ pages of ephemera including flyers, letters, advertisements, and clippings related to magic, the supernatural, ghosts, spiritualism, and associated topics. It is sold along with an organized and research focused collection of materials and notes regarding Dunninger’s life and career, spanning his earliest days to his final moments.
·       Lot #18, Dunninger’s gold and diamond cufflinks from c. 1930, is estimated at $1,000-2,000. These feature the “bat wing” logo of Dunninger’s face designed by Hans Stengel and are hallmarked “HMJ.”
·       Lot #6, a framed lobby portrait of Dunninger, is estimated at $400-800. This handsome, c. 1925 half-length sepia toned image measures 36 x 28” and features the young performer in white tie and tails.

This sale also features premier apparatus and materials owned by, or featuring, Harry Houdini (Hungarian-American, 1874-1926).
·       Lot #293, Houdini's Bible apparatus, is estimated at $15,000-25,000. This 1901 Red Letter edition was published by the World Syndicate Company of New York. It was configured to enable the magician to read the mind of a spectator with 100% accuracy. When a volunteer flipped to any page, the performer could instantly determine which chapter and verse that person was reading. This legacy illusion was inscribed and signed by Houdini: “To / Dunninger / best wishes / Houdini / Nov. 30/1925.” and again by Dunninger in 1967 to noted Houdini collector Ray Ellenbogen.
·       Lot #294, a pair of Houdini-owned Tower Bean handcuffs from 1909, is estimated at $4,000-6,000. These cuffs, in working condition, include their key and were previously on display at the Houdini Historical Center in Outagamie, WI. They retain their original museum tags.
·       Lot #172, Clement DeLion's Tryllebogen from 1910, is estimated at $2,000-3,000. This 80 page book was given as a gift to Houdini from the Danish magician upon the passing of Houdini's mother, Cecelia. It is annotated by Houdini in ink, “DeLion gave this book to me as I lay on my bed of grief – having lost my dearest mother July 17 – 1913. I was in Copenhagen just having arrived there. (July 18 – 1913) DeLion had just lost his wife. They went bathing & she was carried away & drowned. H.H." This tome has provenance to Henning’s World of Magic and is signed Doug & Debby Henning.

Eye-catching posters spotlighting popular performers of yesteryear are another key category in this auction.
·       Lot #343, The Great Brindamour. Magician, is estimated at $6,000-8,000. This full color lithograph from c. 1903 was printed by The Strobridge Litho. Co. of Cincinnati & New York  and measures 27x17-5/8”. It pictures Brindamour performing his levitation illusion, an assistant suspended in mid-air, rays of light emanating from his fingertips, and gnomes.
·       Lot #339, Alexander The Man Who Knows, is estimated at $3,000-5,000. This c. 1920 three-sheet color lithograph depicting the mind-reader holding a crystal ball as he gazes at the viewer.
·       Lot #354, Kellar the Great Magician, is estimated at $3,000-5,000. This half sheet, unmounted color example was printed in Cincinnati by Strobridge Litho. in 1894. It measures 30 x 20” and features the performers iconic and often copied “whispering imps” theme. 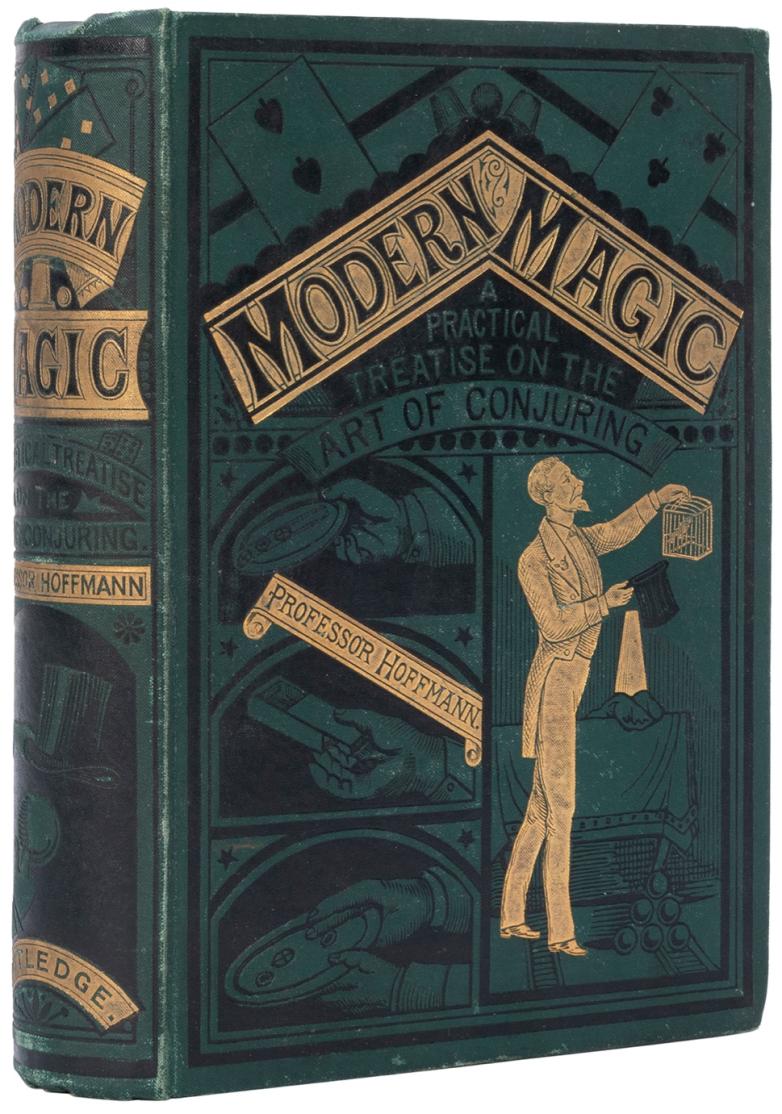 This sale's robust offerings of antique to contemporary magic books will also conjure worldwide attention.
·       Lot #213, Teller and Todd Karr's two volume House of Mystery: The Magic Science of David P. Abbott, is estimated at $1,500-2,500. This deluxe first edition was printed in LA by The Miracle Factory, 2005. It is number 27 of 50 copies and is signed by Teller, Todd Karr, and Katlyn Breene.
·       Lot #273, John White's Art’s Treasury of Rarities and Curious Inventions from 1770, is estimated at $1,200-2,000. This fifth edition was published in London by G. Conyers  and contains sections on the generation of metals and techniques on preservation. This example has provenance to William Carter and is one of four copies known extant.
·       Lot #164, a first edition of Professor Hoffman's Modern Magic from 1876, is estimated at $1,000-2,000. This very rare book was published in London by George Routledge and Sons and includes the Routledge monogram on its title page.

Fine and unusual magicana related photos and prints are also well represented at this event.
·       Lot #352, a giclee print of the original preliminary cover art to Ricky Jay’s Cards as Weapons, is estimated at $1,000-2,000. It is signed and numbered by artist Gary Cooley, is number 8 of 8 copies produced, and includes a print of the later cover and copy of the book.
·       Lot #312, a glass photo negative of Houdini hanging between the struts of an airplane, is estimated at $800-1,200. This 5 x 7” image is from the 1919's The Grim Game which starred Houdini.
·       Lot #282, two portraits of Harry Blackstone and his brother posing for one of their early vaudeville turns - a burlesque magic act titled Straight and Crooked Magic - is estimated at $500-800. These images are from around 1915 and measure 10 x 8” each.

This sale rounds out with contemporary apparatus, automatons, and conjuring finds that bridge traditional auction categories.
·       Lot #435, a. 1990s-era Pyramids of Egypt wine and water trick by John Gaughan and Associates, is estimated at $5,000-7,000. This classic illusion, based on the one from Hoffmann’s Modern Magic, enables wine and water mixed into a decanter to magically separate into two glasses. This well rendered and decorated example is only one of four sets produced.
·       Lot #421, a c. 2005 Blooming Orange Tree automaton made in Paris by Pierre Mayer, is estimated at $3,000-5,000. As the handle turns, a small tree grows white blossoms, then bears orange fruits. Finally, the orange at the top splits open to reveal a silk handkerchief pulled upward by two butterflies. This piece was modeled after the one made famous by Jean Eugene Robert-Houdin.
·       Lot #335, Toni Moretto's (Italian, 1929-2011) Robert-Houdin Sculpture, is estimated at $1,000-2,000. This 1995 piece is a lighthearted representation of the magician seated at a table on which rests his famous Blooming Orange Tree, a glass column mystery clock, and other trappings of his trade. A boy next to the performer opens a piece of apparatus which holds a playing card. This porcelain sculpture measures about 10 x 6 x 9”.
·       Lot #286, an 8" tall bronze desk set in the shape of a conjurer performing cups and balls on a draped, folding table, is estimated at $4,000-6,000. It dates from c. 1875. Its features include the magician's hat which lifts to form an inkwell or hold a pen, his trumpet which forms a seal, and his trunk which opens to accommodate stamps.

According to Gabe Fajuri, President at Potter & Potter Auctions, "Our final sale of the year offers a strong selection of magicana, and I am particularly pleased to offer so much material related to the life and career of Joseph Dunninger. Considered by many to be the most successful mentalist of his era, the archival material in this auction prove what made him great, and what made him into a national personality."