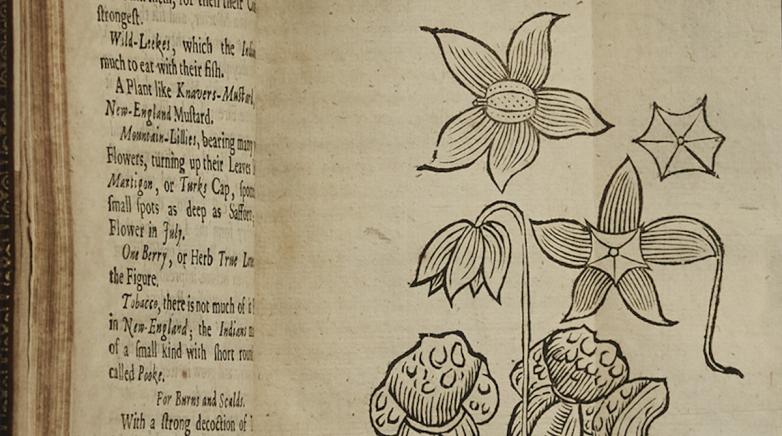 Detail from John Josselyn's New-Englands Rarities Discovered: in Birds, Beasts, Fishes, Serpents, and Plants of that Country. London: Printed for G. Widdowes at the Green Dragon, 1672.

New York –- This fall, the New-York Historical Society presents Close Encounters in the Colonies: Treasures from the David M. Rubenstein Americana Collection, a special installation that traces the origins and development of central themes of early American life—colonization, natural history, slavery, religion, and politics—through 16 rare books from the 17th and 18th centuries. On view October 1, 2021 – January 23, 2022, the showcase reveals the beginnings of American principles that would inform the nation’s founding documents while also showing how many of those principles were either denied to or came at the expense of enslaved and Indigenous peoples.

“We are grateful to our longtime collaborator David M. Rubenstein for sharing his collection with the public,” said Louise Mirrer, president and CEO of New-York Historical. “From colonial times, books have shaped and preserved American history. Because so few books were printed during this period, these examples are exceedingly rare, and each is unique not only in the people, places, and ideas it contains, but also in their very survival throughout the centuries.” 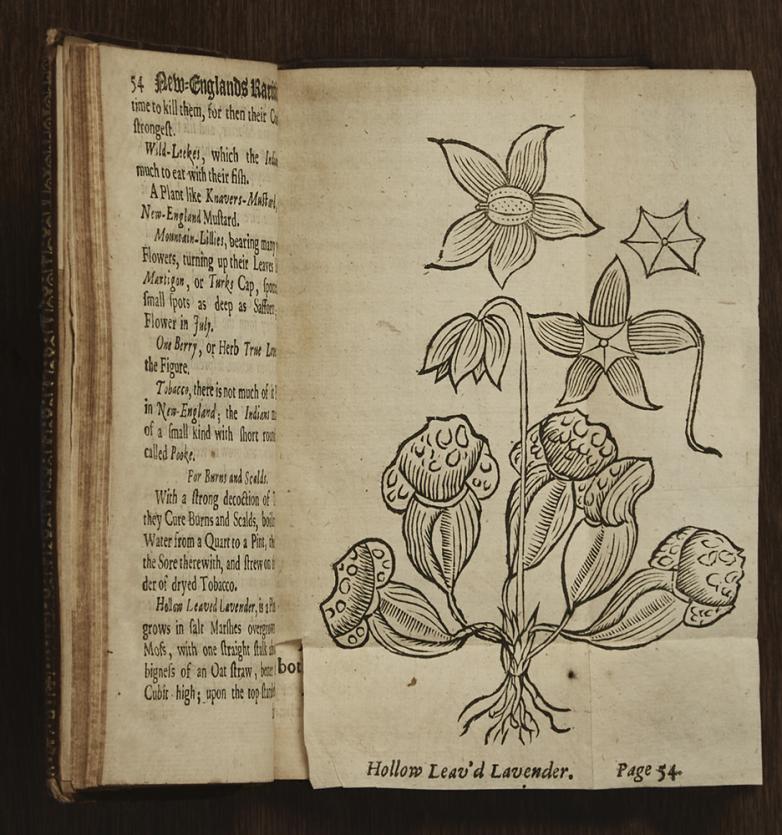 Among the highlights on display are Edward Winslow and William Bradford’s A Relation or Journall of the Beginning and Proceedings of the English Plantation Setled at Plimoth in New England (1622), the first account of the Pilgrims’ arrival in North America and their early interactions with Indigenous peoples, including a brief account of the event that evolved through the centuries to become known as the “First Thanksgiving.”

Several accounts in the exhibition represent the different motivations of the English colonists who settled in the Chesapeake and New England. John Smith’s The Generall Historie of Virginia, New-England, and the Summer Isles (1632) is one of the first histories of early colonial Virginia and contains the first publication of the likely fictional story of Smith being saved by Pocahontas, daughter of the Powhatan chief.

In the 17th century, as part of the “scientific revolution,” Europeans developed a strong interest in trying to understand their natural environments. The rare books on display, including William Wood’s New England’s Prospect (1635)—one of the earliest accounts of the Massachusetts Bay Colony—represent some of the first attempts by Europeans to describe the geography, geology, topology, and biology of North America. They also show how natural history went beyond just scientific inquiry.

Additionally, the installation looks at how concepts such as the separation of church and state in the colonies began with the Puritans, who came to North America seeking freedom to practice their religion as they saw fit—though they did not extend that freedom to others. The texts on view represent the long process of decentralizing religious authority, beginning with a book by Roger Williams—one of the first people to criticize the Puritan authorities for restricting the religious freedom of non-Puritans—and capped by Jonathan Edwards’s highly influential sermon that was a landmark text in the first evangelical revival known as “The Great Awakening,” which continued to challenge older, centralized religious authorities.

Close Encounters also addresses the transatlantic slave trade, which brought the first enslaved Africans to Virginia in the 17th century. Thomas Nairne’s book,  A Letter from South Carolina, shows how central slavery was to the economy of the southern colonies, while Phillis Wheatley’s landmark book of poetry represents a broader struggle of many enslaved persons to retain aspects of their African culture and express their own critiques of the institution of slavery. Her poetry was one of the first major contributions to American colonial literature. Also on view, Olaudah Equiano’s autobiography brought the realities of the transatlantic slave trade home to many readers in Britain and the new United States. His subsequent advocacy for abolition in Britain also represents the efforts of free African Americans in the early national period to advocate for emancipation and abolition.

The final section focuses on politics, with rare books that document several key ideas later enshrined in the Declaration of Independence and the Bill of Rights. The Tryal of John Peter Zenger, of New-York, Printer, Who was Lately Try'd and Acquitted for Printing and Publishing a Libel against the Government (1738) offers an account of the highly publicized trial against German-born printer John Peter Zenger, who was arrested for libel after printing an essay critical of the colonial governor in his newspaper and argued his innocence because what he had printed was true. Zenger was found not guilty, which made truth a defense against libel for the first time, a landmark moment for the freedom of the press in America.