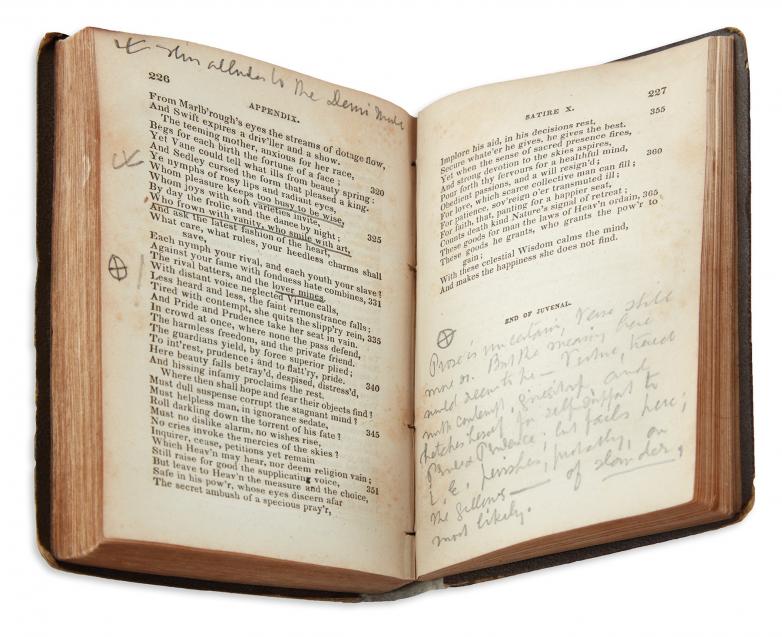 New York — Swann Galleries is poised to offer a rare look at Herman Melville’s personal library in a timely sale announced on the eve of the author’s bicentennial. Two volumes of Greek & Roman classics owned—and heavily annotated—by Melville are set to come across the block in Fine Books & Manuscripts on October 10.

In March of 1849, a year prior to Moby Dick’s publication, Melville purchased a 37-volume set of classics from the publishing company Harper and Brothers. Here, making their market debut, are Euripides, Juvenal and Persius, in the only two known surviving volumes from the set once owned by the author. Melville’s autograph can be found in the volume containing Juvenal and Persius, and all are marked with numerous annotations illuminating which passages were of interest to the author. Also featured throughout are brief observations, most notably his annotation to Samuel Johnson’s The Vanity of Human Wishes, an imitation of the Tenth Satire in Juvenal, which reads: "Prose is uncertain, verse still more so. But the meaning here would seem to be—Virtue, tired with contempt, gives it up, and latches herself for self-support to Pride & Prudence; but fails here; i.e., perishes, probably, on the gallows—of slander, most likely."

Possibly the most interesting revelation from the volumes is that the author brought them shipboard on an 1860 New York­–to­–San Francisco trip aboard the Meteor. The names of places often appear in the books Melville traveled with. The present classics are annotated with the initials C.H and C. Horn., marking his time as he rounded Chile’s Cape Horn. From his letters we know that Melville occupied his time during the long trip with the study of poetry, the marginalia found within the volumes provides a more complete understanding of the author and the poetic literature that became the focus of his later works. Expected to bring $40,000 to $60,000, the discovery is the first works from Melville’s library to come to auction in more than a decade.

The full catalogue, which in addition to Autographs will feature 19th & 20th Century Literature and Art, Fine Press & Illustrated Books, will be available in September. Exhibition opening in New York City October 5. For further information visit swanngalleries.com or download the Swann Galleries App.