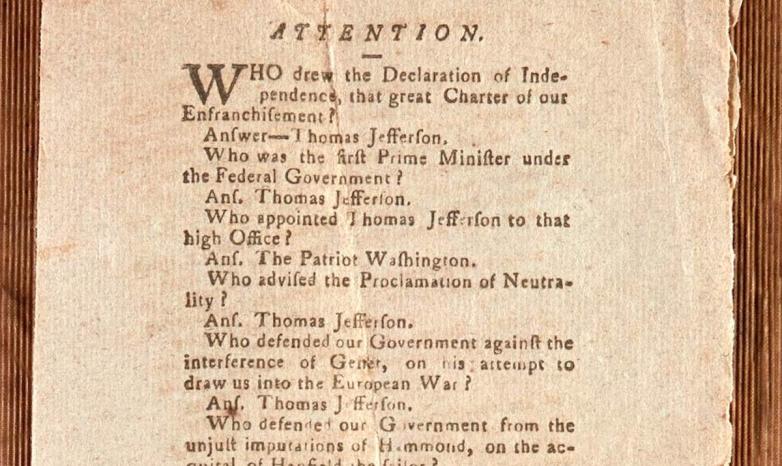 Philadelphia — When Thomas Jefferson and John Adams went head-to-head in the 1796 United States presidential election, it was the first time that the young nation’s presidential succession system was put to the test, following George Washington’s two uncontested terms. This extremely rare campaign handbill, discovered in Maryland and on offer in Freeman’s Books and Manuscripts auction on February 17, represents the first time such campaign material was used to influence voters on a national scale. 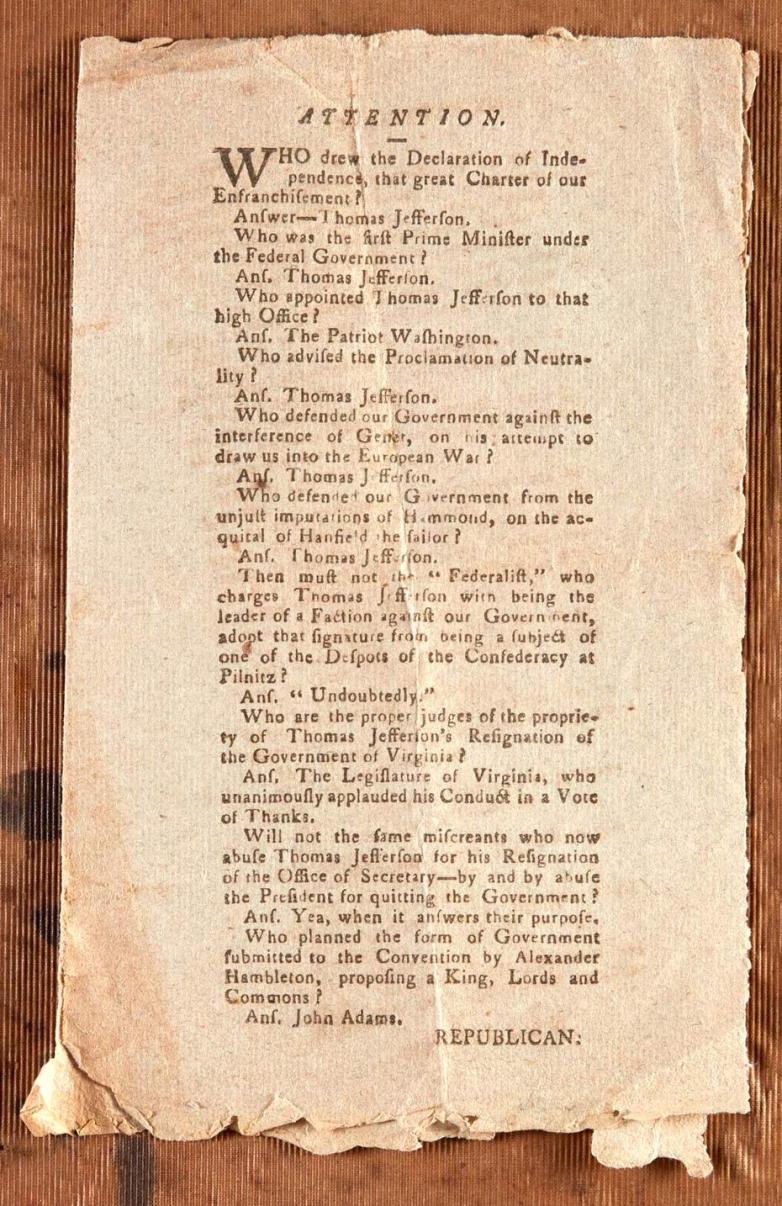 Offered at an estimate of $15,000-25,000, this handbill is the only known surviving example of its kind, and is a significant artifact from an election where any extant handbills are rare.

The pro-Jefferson text takes the form of a catechism and poses ten questions to its reader and offers ten answers in turn. It casts Adams and his Federalist colleagues as monarchists and “miscreants” and informs its audience that it was Jefferson who wrote the Declaration of Independence, not commonly known at the time. Described as “one of the most economical and effective pro-Jefferson texts produced anywhere in 1796” by historian Jeffrey L. Pasley, this handbill “taught the gospel of Thomas Jefferson as it would be passed down for generations.”

While the tactic of denigrating the personal and political character of the opposing candidate is familiar to contemporary audiences, the present handbill illustrates that it has been in use in American politics since almost the beginning of the nation’s founding. At the time of the text’s printing (likely the fall of 1796), the American voter was coming into consciousness as a partisan subject aligning with one of the two nascent political parties, the Democratic-Republicans or the Federalists. It was written plainly enough to gain traction with a lay audience, and in a sufficiently inflammatory tone as to stake out a clear position.

Handbills such as the present example would have been distributed largely by hand, particularly in a key battleground state such as Maryland. Newspapers throughout the rest of country also reprinted the text, including its first known appearance, in the Maryland Herald and Eastern Shore Intelligencer, on November 8, 1796, as well as in Philadelphia’s own Aurora General Advertiser, on November 18. The handbill was discovered 225 years later, in Queen Anne’s County, Maryland.

A significant piece of American history, the handbill’s survival and discovery is remarkable.