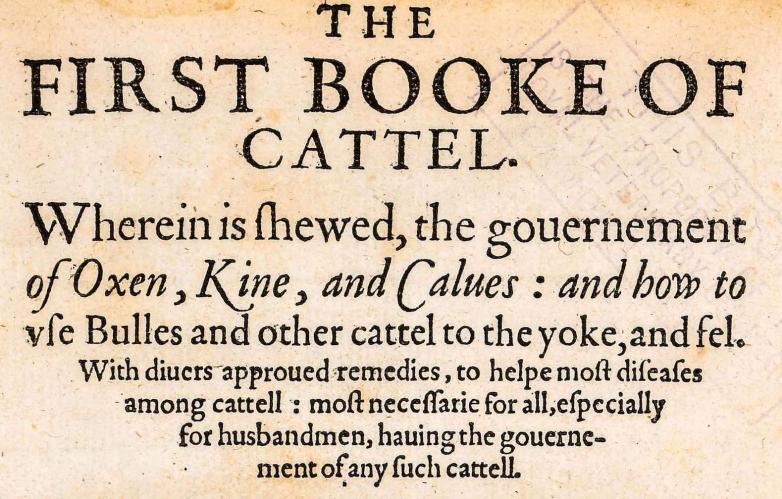 Leyburn, North Yorkshire - Topping the Glaisdale Agricultural Library Sale at Tennants Auctioneers on September 30 was Leonard Mascall’s The First Booke of Cattel, which sold for £6,200 ($7,000, all figures, excluding buyer’s premium), far surpassing its estimate. Mascall’s text was a foundational resource in the field of husbandry and was amongst a fine selection of Mascall books on offer in the sale, all of which sold handsomely. Mascall, born in Kent in 1589, wrote extensively in the fields of animal husbandry and fishing and served at one period as clerk of the kitchen in the household of Mathew Parker, the Archbishop of Canterbury.

On all accounts, the sale of Glaisdale farmer Martin Henry Burtt’s extraordinary private library of antiquarian agricultural books was a triumph. The high results reflect Burtt’s incredible aptitude and knowledge as a book collector; as well as his keen sense of custodianship, preservation, and curation of the history of agriculture in the 16th to 18th centuries – periods spanning the transition from an era when it was considered dubious to attempt to improve on God’s Creation to the advent of the Age of Reason with its huge rise in literacy, invention, experimentation, and applied rationality. Burtt’s collection mirrors his high standing in the farming community where he served as Deputy National Chairman of the National Farmers’ Union under Sir Ben Gill.

Strong prices throughout the sale continued with Gervase Markham’s The English Husbandman selling for £2,500, and Conrad Heresbach’s Foure Bookes of Husbandry which sold for £2,400 ($2,800). Translated by Barnabe Googe, Heresbach’s text is written informally through the perspective of an imaginary visitor exploring a countryman’s house encountering gardens, stables, and farmlands. Heresbach (1496-1576) served as a counsellor “to the high and mighty” Duke of Cleves and he was a close friend of Erasmus, the greatest scholar of the Northern Renaissance.

Gabriel Plattes’ A Discovery of Infinite Treasure, Hidden since the World’s Beginning sold well at £2,200 ($2,490) reflecting the importance of Plattes, who was one of the first to ambitiously explore how systems of husbandry could be improved if studied through the lens of examining the relationships between landlord and tenant.

A precedent of strong results permeated the sale, seeing Sir Hugh Plat’s The Jewel House of Art and Nature: containing Divers Rare and Profitable Inventions and John Houghton’s A Collection of Letters for the Improvement of Husbandry and Trade selling incredibly well at £2,200 ($2,490) and £1,900 ($2,150) respectively.

The Glaisdale Agricultural Library Sale achieved a total hammer price of £70,440 ($79,600) far exceeding its estimate with an impressive sold rate of just below 90%.