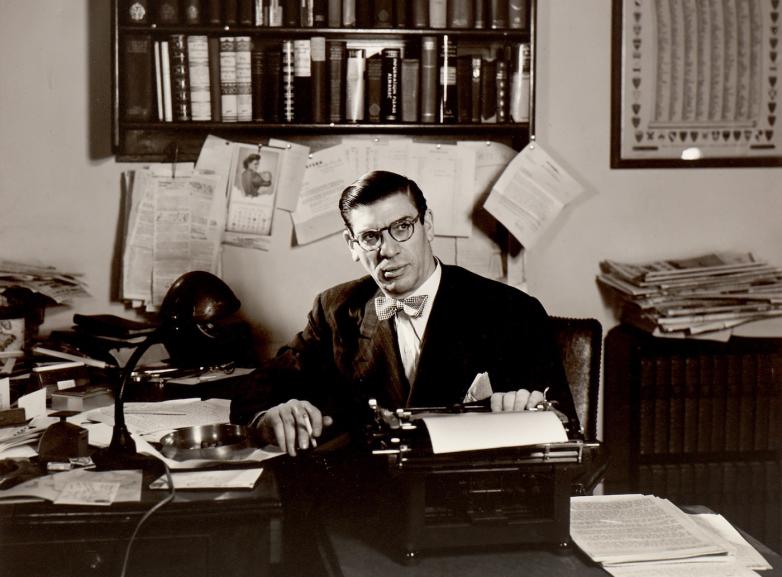 London — Chiswick Auctions is thrilled to offer the library and private estate of one of the greatest storytellers and writers of the 20th century, Paul Gallico (1897-1976). The celebrated American-born novelist, screenwriter and journalist is renowned for the writing of a number of significant works, including his most well-known book, The Snow Goose, a short novel that achieved much acclaim and was later made into a film and broadcast on BBC TV.

The film was created from a screenplay by Gallico and featured Jenny Agutter and Richard Harris. It was so popular that it won a Golden Globe for ‘Best Movie Made for TV’ and was nominated for both a BAFTA and an Emmy, with Agutter winning ‘Outstanding Supporting Actress’. It didn’t end there, as in 1976, Spike Milligan narrated an edited version, with music by Ed Welch, issued on RCA records in 1990 (a copy of which is offered in the sale amongst a collection of First Editions of Gallico’s work Lot 96 Estimate for group lot £200-£300).

Among some hugely exciting pieces in his collection is a fascinating range of Gallico’s own work, as well as personal notes, press cuttings, personal artefacts including his trusty typewriters, his leather Abercrombie & Fitch flying jacket from his time as a war correspondent, a range of his highly-popular books and insightful notes that offer us a glimpse into the man behind his writings, as well as some rare First Editions by significant writers and great friends of his. While the sale is primarily an auction of Books and Works on Paper, furniture, original art and posters will also feature. The sale is titled Books & Works on Paper including Contents from the Estate of Paul Gallico and will take place at Chiswick Auctions on Thursday, 27th January, 2022.

Commenting on the sale, Clive Moss, Head of Rare Books & Works on Paper Department at Chiswick Auctions says, “The collection is a tangible reminder of a writer whose presence and works continue to entertain us, inspire us and entertain us, so many years after his death.”

Paul Gallico’s skills went beyond books and films and arguably, without Gallico’s writings, enthusiasm and encouragement we would not have two of the biggest cultural phenomena of our times: James Bond and Harry Potter. Gallico was a good friend of Ian Fleming, who was at the time a journalist working with him on the Sunday Times. Wanting to move out of journalism, Fleming sent an initial typescript of his first book Casino Royale to Gallico asking if it was publishable, to which Gallico replied: “The book is a knockout!” He then helped to promote Fleming to an initially unresponsive American public and the rest is history.

It is no surprise then that highlights of the sale include two inscribed First Editions by Ian Fleming; Casino Royale and Diamonds are Forever. The First Edition, First Issue of Casino Royale, is a good copy of the author’s first novel to one of his best friends. Fleming jokingly signs his dedication: “To Paul from Balzache 1953”, which is friendly literary jokery, with a play on ‘balls /ache’. (Lot 82 Estimate £18,000-£22,000). In the First Edition of Diamonds Are Forever is a more personal note from Fleming: “To Paul, who spread his wings over my first-born, 1956”, in reference to Gallico’s help in attaining publication of his first novel, Casino Royale. This First Edition, First Impression presentation copy is estimated to fetch £12,000-£18,000 (Lot 83). The sale comprises a complete set of eight Fleming’s Bond novels in their First Editions, eight of which are signed by Fleming to Gallico. (Lot 89 – Estimate £40,000-£60,000).

The connection to Fleming also transpires in a film poster of Dr No, which is the first ever poster for a ‘Bond’ film and therefore much sought-after. The artwork was produced by Mitchell Hooks and David Chasman. Dr No was the inaugural James Bond film, released in 1962, featuring Sean Connery and Ursula Andress. In excellent condition, the poster carries an estimate of £20,000-£25,000 (Lot 92)

Gallico had friendships with many literary figures, including the writer J K Rowling and in 2002 she stated that Gallico’s Manxmouse was one of her favourite books and the ‘Clutterbumph’ that appears in Gallico’s book, bears some resemblance to the ‘Boggart’ character Rowling went on to create for the Harry Potter series (a being that manifests itself into whatever the viewer most fears). Among works by JK Rowling in the sale is an unusual First Edition, first printing example of Harry Potter and the Philosopher's Stone. This particular book is likely to be highly desirable to both book-lovers and Harry Potter fans alike, as it is a very scarce copy. (Lot 111 Estimate £20,000-£30,000).

Among a collection of children’s books by JK Rowling in the sale is a First edition, second issue of Harry Potter and the Goblet of Fire signed by the author on a dedication page. It also comprises Newt Scamander: First edition, signed by the author on dedication page, Newt Scamander: Fantastic Beasts & Where to Find Them, First Edition and Kennilworthy Whisp: Quidditch Through the Ages, as well as ten later edition Harry Potter titles with publicity photos of some of the cast. (Lot 110 Estimate £600-£800)

Gallico’s great friend the British novelist Graham Greene was a neighbour of his in Antibes. Greene wrote more than 25 novels across his lifetime and was short-listed in 1966 and 1967 for the Nobel Prize for Literature. A First Edition, signed copy of a Burnt-out Case by Greene is offered in the sale. The inscription reads: “For Paul Gallico – arrears for gratitudes to Antibes…. From Graham Greene, 1961”. It is estimated to fetch £1,000-£1,500 (Lot 100).

As well as literary friends, Gallico had many in the art world and his collection contains an archive of personal correspondence, totalling 36 folio albums. They contain interactions with notable figures, such as two letters between Gallico and the actor David Niven, an excerpt of which reads: “Dear Mr Gallico, Yours of 17 Feb received, read and deeply resented. [...] you, unless my memory fails me, once tried to take the bread out of poor ailing Jack Dempsey’s basket. Also Lennie Lyons is a c*nt… though you don’t have to quote me’; ‘[...] the other in Paris with that ugly old Italian broad - Sophia Loren!”

A letter from Noel Coward reads: “I was riveted by ‘Poseidon’ from beginning to end [...] I didn’t actually read it hanging upside down from a glass chandelier, but I was certainly hanging from the chandelier for several days after [...]” Within two letters and a telegram from Marlene Dietrich she writes: “Thinking of you. Lonesome down under, Marlene”. Other notes and ephemera in the folio are from: Joan Crawford, Aga Khan IV, the Walt Disney family, Marina Duchess of Kent, a photo from actor Richard Harris who signed the back: “I must be the most expensive present Princess Grace ever gave you!”, as well as a National Academy of Television certificate for the ‘Snow Goose’ adaptation, with telegrams about Emmy nominations and related photographs, plus many more. The folio has an estimate of £800-£1,200 (Lot 75)

Chiswick Auctions specialist, Clive Moss concludes: “This is a fabulous opportunity to be part of the continuing story that was and is, Paul Gallico - a supreme writer and talent with an enduring quality that never fails to entice and capture our attention. We look forward to a fascinating literary delight of a sale.”