New York — The Museum of Chinese in America (MOCA) is pleased to make several announcements in celebration of its 40th Anniversary in 2020: the opening of its Windows for Chinatown exhibition and its new temporary space MOCA Workshop replacing the MOCA Collections and Research Center that was destroyed in the 70 Mulberry Street fire. 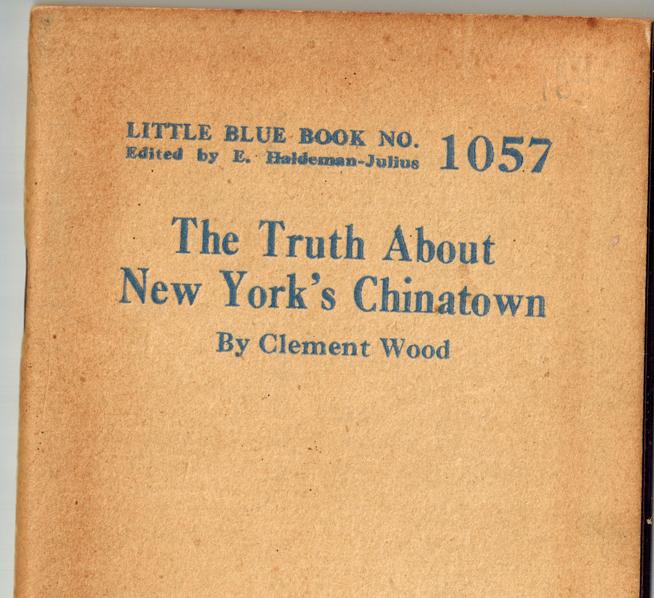 This Little Blue Book is a new acquisition, received after a devastating five-alarm fire at MOCA in January 2020.

“MOCA has had a long journey to this day. The outpouring of support after the fire at 70 Mulberry Street remains the stabilizer and catalyst for MOCA to continue. In the past nine months, MOCA has not missed a beat. In addition to extracting more than 85,000 items out of the fire-torn building, the team has worked ceaselessly to create a plan for full recovery. We hope that the MOCA Workshop will serve as a light during these times—one that shines brightly as MOCA continues to tell the untold stories in the making of America. We are heartened and grateful for the acts of courage amidst a rampant escalation of anti-Asian/Asian American racism. Windows for Chinatown is a fully-accessible illumination of the stories we have heard during this time,” said Nancy Yao Maasbach, President of the Museum of Chinese in America.

MOCA’s 40th anniversary comes in a year when the Museum’s resilience has been tested by a five-alarm fire on January 23, 2020 at its Collections and Research Center that has left its archive of nearly 200 years of irreplaceable Chinese American history in need of years of repair, rehousing, and conservation; over 2,000 reports of hate crimes against Asian American Pacific Islanders and Asians; a substantial loss of revenue from the Museum’s shuttered operations due to COVID-19; and fraught U.S.-China relations and its impact on people of Chinese descent in America.

Despite these challenges, MOCA has been encouraged by the vote of confidence and transformative $3 million grant from the Ford Foundation and other leading U.S. foundations and donors (read the full press announcement here) that have selected MOCA as one of 20 “America’s Cultural Treasures” for their role as significant national anchors for artistic and cultural diversity in America.

MOCA has been encouraged and moved by the unity and outpouring of community support shown by donors, members, artists, and volunteers near and far during this tumultuous year.

While MOCA has successfully pivoted to providing its curatorial, collections, and educational content via digital, online and social media platforms, as well as offering live-streamed public programs, masterclasses and tours of MOCA to hundreds of virtual attendees, MOCA has planned a series of in-person socially-distanced experiences and programs for Fall 2020 to celebrate its 40th anniversary and to show its gratitude to its community of supporters.

MOCA’s 40th Anniversary celebration is accompanied by a newly launched companion website at https://moca40.mocanyc.org showcasing MOCA’s 40 years of history, stories submitted by the public to the MOCA OneWorld COVID-19 special collection, and images of new acquisitions of artifacts donated by the public post-fire.

For MOCA’s 40th Anniversary celebration, the public is invited to follow the Museum on social media where a “MOCA 40 Stories” educational campaign will be launched on Facebook, Twitter, and Instagram at @mocanyc. For this social media campaign, the Museum will tell 40 stories about the untold history of MOCA using iconic archival images from MOCA’s Collections.

Windows for Chinatown
MOCA has transformed its windows on Centre and Lafayette streets into exhibition spaces that reflect on Chinatown history, anti-Asian racism during the COVID-19 pandemic, and the recent uprisings for racial justice. Windows for Chinatown will draw from MOCA’s storied national archive of Chinese American history, in addition to highlighting new acquisition projects such as the OneWorld COVID-19 Collection.

MOCA Workshop: Collections and Research Center
The MOCA Workshop is the Museum’s new Collections and Research Center, which was previously located at 70 Mulberry Street. Nine months after a devastating five-alarm fire at 70 Mulberry Street in January 2020, MOCA has opened a new home for its extensive archive of over 85,000 artifacts that document the Chinese experience in America. As the name implies, the MOCA Workshop, located at 3 Howard Street one block away from the Museum, will be a publicly accessible research space that invites hands-on engagement with MOCA’s Collections.

The MOCA Workshop’s storefront space will serve as a reading room featuring the Museum’s extensive library of Chinese and Asian American history and literature. The remainder of the ground floor and the MOCA Workshop’s second floor will house MOCA’s Collections and institutional archives, which were retrieved from 70 Mulberry Street after the fire. Additionally, the MOCA Workshop will be equipped with a triage space to conserve materials, a digitization station, and an oral history recording station.

The Windows for Chinatown exhibition and the MOCA Workshop space will be accessible to the public for free between Friday, October 16, 2020 and Sunday, October 18, 2020. Access will be by advance timed ticket only.