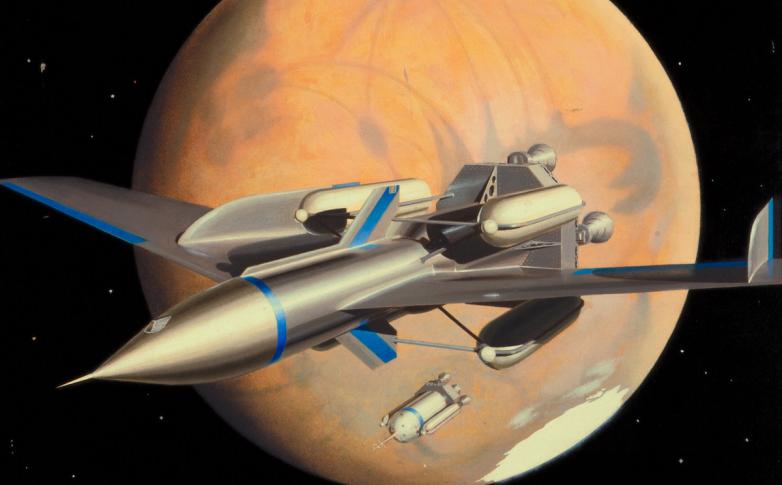 Chesley Bonestell’s Winged Rocket Ferry Orbits Mars Prior to Landing after 250-Day Flight, 1956 soared to $87,500. The image appeared on the cover of Wernher von Braun’s iconic book, The Exploration of Mars.

The model in the image, Mara Corday, is captured in the signature V-leg pose that was Vargas’s calling card in her second sitting for the artist – he lost the rights to the first, and other images he signed as “Varga,” in a years-long legal battle with Esquire magazine. Esquire sued the artist for the works signed "Vargas" in True but ultimately failed. This win and the publication of his nine True Girls including the present work revitalized the artist and his career.

“The Mara Corday Vargas was the quintessential example with his iconic V-leg pose. We could not be happier that this work received the attention it deserved, with 15 bidders and resulting in fourth-highest result Heritage Auctions has ever had with Alberto Vargas,” Heritage Auctions Fine & Decorative Arts Consignment Director Meagen McMillan said. “We are beyond thrilled with the results of our auction. From the original artwork for Boston’s Don’t Look Back album cover by Gary Norman to Alberto Vargas reclaiming of his name with Mara Corday – this sale was filled with excellent examples by illustrators of every genre.”

Capturing the humor and personality of the author’s beloved characters, Ernest Howard Shepard It Appears You have Eaten a Bee, The House at Pooh Corner interior book illustration, 1928 finished at $93,750, nearly doubling its high pre-auction estimate. From the story that has entertained children for generations, this image is published on page 29 of A.A. Milne's book, The House at Pooh Corner in Chapter II, “In which Tigger Comes to the Forest and has Breakfast.”

Charles Addams The Addams Family Christmas," Addams and Evil interior book cartoon, 1947 sold for $87,500, more than seven times its high pre-auction estimate and a new world record for the artist. Since the 1940s, Addams’ sinister and morbidly eccentric cartoons have become an essential part of the comic landscape. 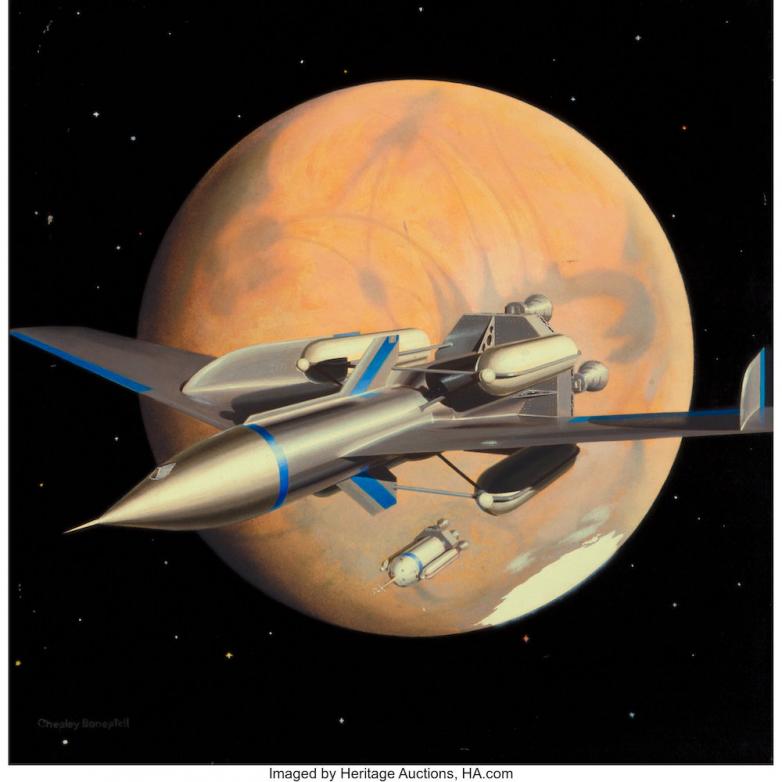 Just a couple of months after the Perseverance Rover landing on Mars, Chesley Bonestell’s The Exploration of Mars book cover, Winged Rocket Ferry Orbits Mars Prior to Landing after 250-Day Flight, 1956 soared to $87,500, nearly three times its high pre-auction estimate. The offered image appeared on the cover of Wernher von Braun’s iconic book, The Exploration of Mars. The painting illustrates von Braun's design for the space ship that would allow humans to go where no man had gone before.

A second work by Bonestell, Mars as Seen from the Outer Satellite, Deimos, The Solar System interior book illustration, 1961, brought a winning bid of $41,250

The only album cover he ever painted during a long career as a commercial artist, Gary Norman’s Boston Don't Look Back album cover, 1978 soared to $81,250, more than 11 times its high pre-auction estimate. The album that reached the No. 1 on the Billboard charts and was among the first compact discs released upon the format’s debut in the early 1980s, Don’t Look Back featured Norman’s upside-down guitar/spaceship design that is as recognizable to some as the music in the album.

“I am totally blown away and very pleased with that – my heart is still pounding,” Norman said of the result. “That’s gonna be something I remember for the rest of my life. Looking back at Don’t Look Back, it’s quite amazing. Totally amazed.”

The auction included three video covers from the artist widely recognized as the preeminent designer of movie posters, John Alvin. Arguably his most instantly recognizable work came from the Star Wars films, the most successful movie franchise of all time. Alvin’s highlights in the sale included: