Lenin and Trotsky Autographs Obtained by French Journalist Sold for $64,000 at Auction 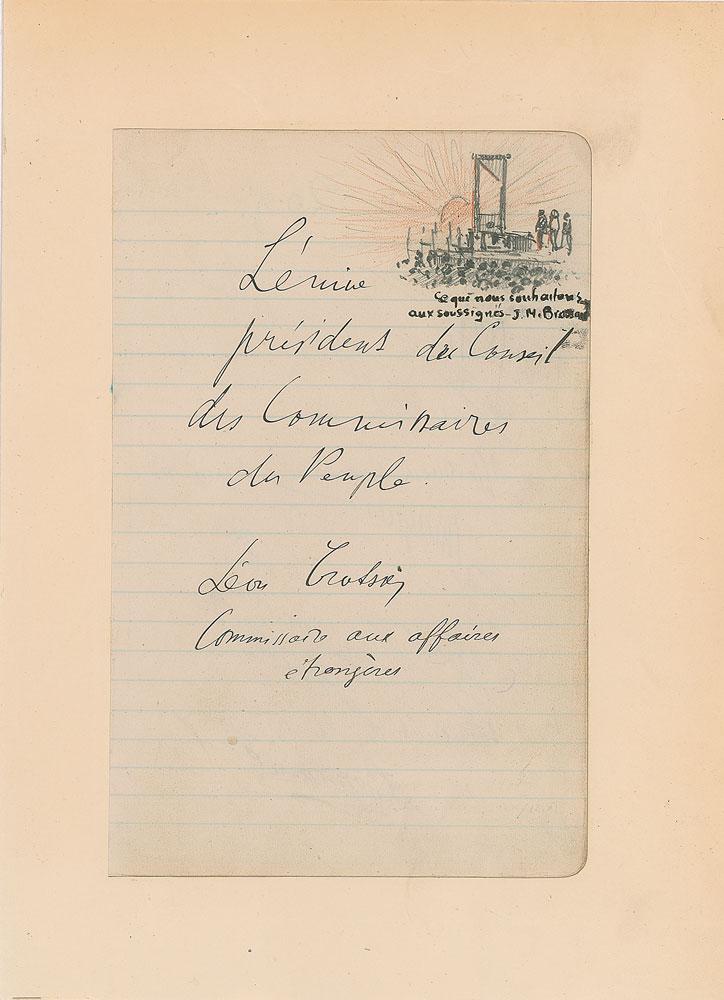 Lenin and Trotsky signatures from a notebook previously owned by Robert de Flers.

Boston — An amazingly rare combination of Vladimir Lenin and Leon Trotsky signatures sold for $64,055 according to by Boston-based RR Auction.

The signatures were obtained shortly after the historic October Revolution, a seizure of state power instrumental in the larger Russian Revolution of 1917. It took place with an armed insurrection in Petrograd, following and capitalizing on the February Revolution of the same year, which overthrew the Tsarist autocracy. The October Revolution resulted in the power being shifted to the local Soviets in Petrograd, whom heavily supported the Bolshevik Party.

After the Congress of Soviets, now the governing body, had its second session, it elected members of the Bolsheviks to key positions which immediately initiated the establishment of the Russian Socialist Federative Soviet Republic, the world's first self-proclaimed socialist state. On November 8, 1917, the Congress elected a Council of People's Commissars, with Lenin as Chairman and Trotsky as Commissar of Foreign Affairs, the positions they have added to the present signatures.

The fountain pen signatures, circa 1918, were removed from a notebook previously owned by Robert de Flers, French playwright and journalist who traveled to the Eastern front as the head of a French military mission, taking him to Romania, Moscow, and Petrograd, at which time he obtained the signatures of Lenin and Trotsky.

Bob Dylan's handwritten lyrics for "The Times They Are-a-Changin' sold for $83,418.

Astronaut archive including photos, negatives, and transparencies from the Golden Age NASA sold for $16,667.

The Fine Autographs and Artifact auction from RR Auction began on April 19 and concluded on May 8.  More details can be found online at www.rrauction.com.