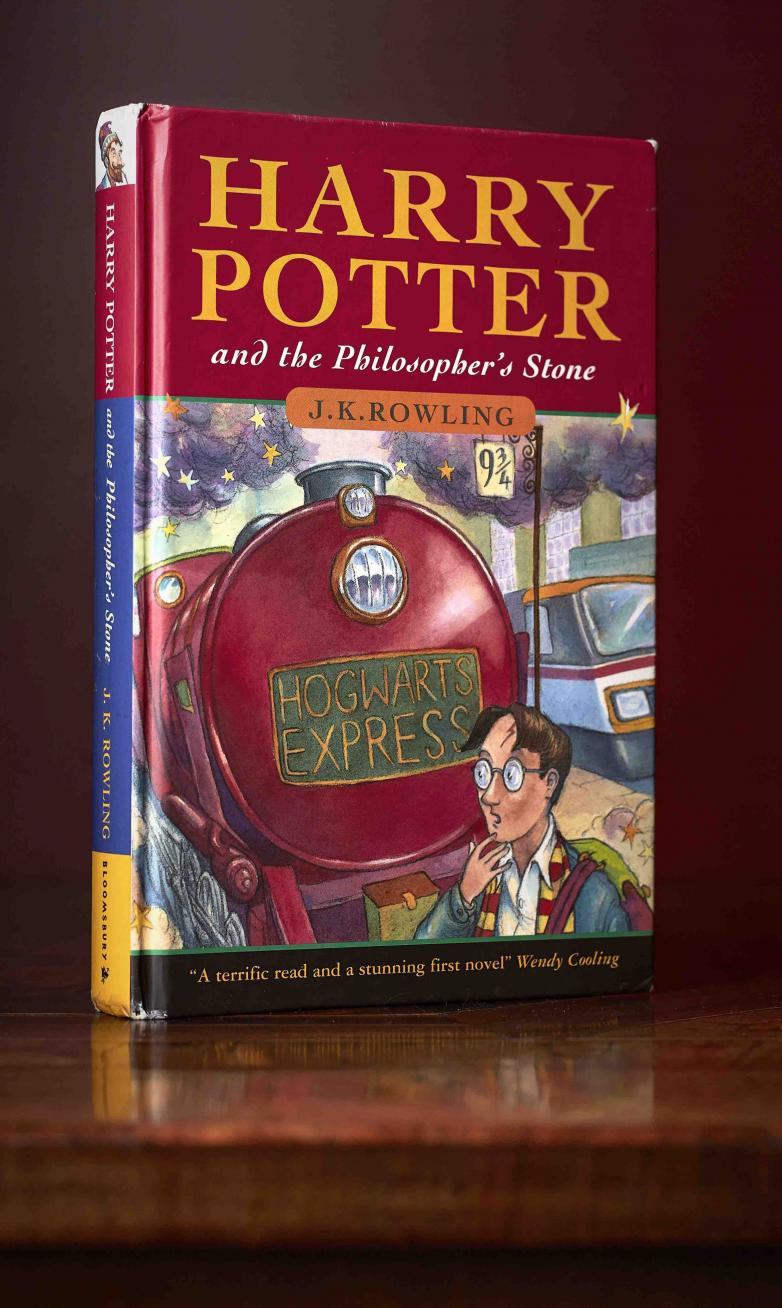 A first edition, first impression, hardback copy of Harry Potter and the Philosopher’s Stone, inscribed and signed by J.K. Rowling in September 1997.

Lyon & Turnbull are delighted to present a first edition, first impression, hardback copy of Harry Potter and the Philosopher’s Stone, inscribed and signed by J.K. Rowling in September 1997 – less than three months after the book’s publication in June of that year. This book is a true rarity. Only 500 copies were produced in first edition, first impression hardback, with around 300 of these being given to libraries and schools. This would leave a maximum of 200 copies of the book in possible circulation in fine, non ex-library condition; though the actual number is likely to be far lower. A handful of first edition, first impression books were then inscribed by J.K. Rowling for friends, acquaintances and family members. This copy is one such work, inscribed: “6-9-97 / For James, Kate and Laura, with best wishes, J.K. Rowling”.

At auction, Harry Potter and the Philosopher’s Stone has reached high acclaim. Since 2016, signed copies of the first edition have risen in value from £46,000 to $130,000 in 2018. The high collector’s value of a first edition of Harry Potter and the Philosopher’s Stone reflects J.K. Rowling’s vast commercial success, named by Forbes as 2019’s highest-paid author. The reason for the cultural phenomenon that is Harry Potter is simple: Rowling has created a literary world which allows for absolute absorption and escapism, whilst simultaneously tackling some thought-provoking issues. Similarities can easily be drawn between the persecution of muggle-borns [magical children born to non-magical parents] in the Harry Potter series and the persecution of ethnic minorities on a national-level throughout history. Comparisons have even been drawn between the Ministry of Magic’s approach to the threat of the book’s main antagonist, Lord Voldemort, and the British Government’s policy of appeasement with Nazi Germany in the 1930s. Combine the demand for this engaging narrative with the rarity of a first edition, first impression and the result is a very valuable book!

The Rare Books, Manuscripts, Maps & Photographs auction on 17 June presents a wonderful opportunity to welcome the book back to Edinburgh – widely regarded as the “home of Harry Potter.” The boy wizard was dreamt up by Rowling on a delayed rail service between Manchester and London’s King’s Cross Station, however Rowling has said: “…Edinburgh is very much home for me and is the place where Harry evolved over seven books and many, many hours of writing in its cafés.” Many similarities have also been drawn between Edinburgh’s imposing independent schools and the wizarding school, Hogwarts. In the past, Rowling has said that she imagines Hogwarts to be in Scotland: a claim corroborated by the Harry Potter films, where the school train, the Hogwarts Express, is seen diving over the iconic Glenfinnan Viaduct in the Scottish Highlands.

A story that has captured the hearts of generations around the world, the rarity of this iconic book makes this first edition, first impression extremely desirable. With the continued interest and constant evolution of the Harry Potter franchise, Harry Potter and the Philosopher’s Stone represents the humble beginning of a truly magical journey.

Other auction highlights include:

Robert Burns. Autograph Letter Signed to Captain Francis Grose, Ellisland, 1 Dec. 1790, 2 pages, 4to, (190 x 121mm), bifolium, docket (traces of paste where pasted into an album), about sending the manuscript for Tam O'Shanter. Opening with a graceful excuse for a hurried letter ('I am not, God knows, vain of my composition, & if you like intellectual food more substantial than the whipt syllabub of epistolary compliment'), Burns refers to the enclosure which originally accompanied the letter of 'one of the Aloway Kirk stories, done in Scots verse. Should you think it worthy a place in your Scots Antiquities, it will lengthen not a little the altitude of my Muse's pride.' He request's Grose's discretion in reproducing his work, noting that 'Authors have too often very little to say in the disposal of this world's affairs, but it would be very hard if they should not be absolute in their own works'. Grose's 'draft of Kilwinning is finished, but not come to hand. I shall send it you the minute it reaches me'

Note: The 'Scots verse' referred to is none other than Burns's great mock-heroic narrative poem, Tam o'Shanter: a Tale, composed to accompany the entry for Alloway Kirk in the second volume of The Antiquities of Scotland, published by Grose in 1791. Burns's 'kind funny friend', Francis Grose (d.1791) - immortalised by the poet in On the late Captain Grose's Peregrinations through Scotland - was an early recorder of ruins and archaeological remains north of the border; the extent of the collaboration between the two is apparent from the reference to Kilwinning Abbey, which features in the same volume. Composed towards the end of Burns's tenure at Ellisland farm - a a creatively fertile period during which he also produced Auld Lang Syne - and marked by Burns's deft use of Hudibrastic verse and idiosyncratic mixing of Scots and English, Tam o'Shanter is often considered to be his finest poetic creation. A Biography of Robert Burns (1993), p.463