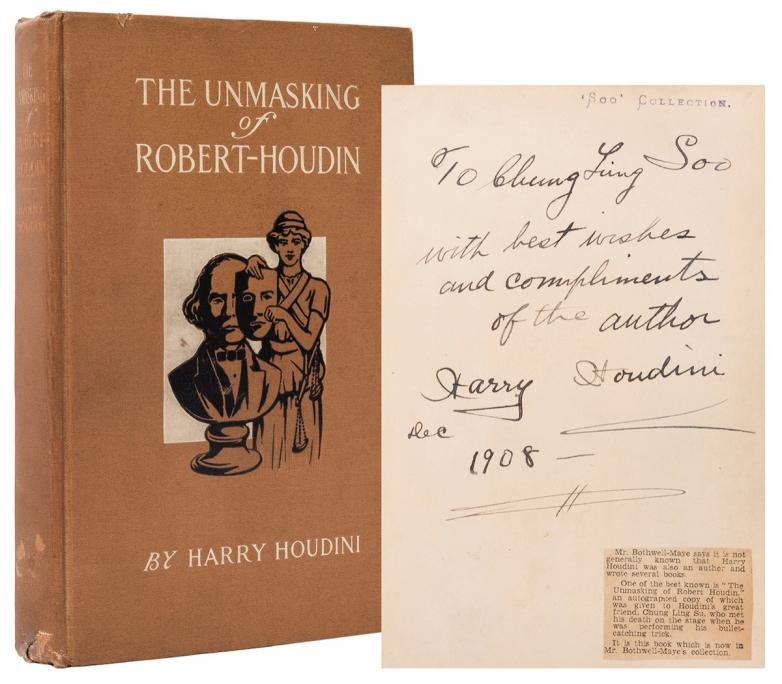 A first edition copy of Harry Houdini's The Unmasking of Robert-Houdini, is estimated at $4,000-8,000.

Chicago — Potter & Potter Auctions is excited to announce its upcoming Select Secrets, Rare & Important Magicana sale to be held on Saturday, February 27th, starting at 10am, CDT. Given current regulations, this sale will be streamed live from Potter & Potter's gallery and held on www.potterauctions.com. Bids can be placed on the company's website. Phone and absentee bidding are available as well. All lots are available for preview now on Potter & Potter's website.

Stunning lithographs from legacy magicians take many of the top slots in this can't-miss auction.

•    Lot #72, a c. 1986 one sheet stone lithograph promoting Harry Keller, is estimated at $8,000-12,000. This example pictures the magician with a demon whispering in his ear and surrounded by owls, bats, and demons amidst vignettes from his show. This poster was printed at the height of Kellar’s popularity during his reign as the most successful and accomplished magician in America, and its iconic image was chosen as the cover to the Taschen publication Magic 1400s – 1950s by Ricky Jay, Mike Caveney, and Jim Steinmeyer.
•    Lot #72, a c. 1894 half-length portrait of Harry Keller with two imps perched on his shoulders, is estimated at $6,000-12,000. This framed, linen backed piece, titled Kellar the Great Magician, is a rare variant of this legacy poster. One of three or four extant, this example uses a different combination of colors and lettering to create a subtler effect than its well known cousin.
•    Lot #29, a c. 1905, artistically rendered color lithograph featuring a bust of T. Nelson Downs, King of Koins, is estimated at $8,000-10,000. Printed in Chicago by Carqueville Litho, it spotlights the performer surrounded by vignettes of his coin manipulation act, ribbons of silver coins, and soft red flowers. A filmstrip-like sequence from his Miser’s Dream fills the bottom of the poster.

•    Lot #76, an Empire Theatre broadside advertising Lafayette’s performances for the week of May 1, 1911 – just days before his life would be claimed by a fire that destroyed the Empire Theatre - is estimated at $5,000-10,000. Printed in 1911, this broadside is one of a handful of posters from Lafayatte’s final performances known. Lafayette was among the highest-paid artists of his generation; his act combined magic, quick change routines, and celebrity impersonations.
•    Lot #1, a diary kept by Claude Alexander Conlin or Alexander - The Man Who Knows - during his travels to the Alaskan goldfields in 1898, is estimated at $3,000-6,000. Discovered in 2014, it is signed on the inside cover and written in his own hand. Through its pages, one sees Alexander evolve from a wide-eyed boy into a hardened miner and observer of human nature, an experience which would serve him well at the time of his turn of last century crystal gazing act.
•    Lot #10, a blank ledger page featuring a group of important magicians’ autographs from c. 1921, is estimated at $3,000-5,000. This impressive grouping, likely collected by John Mulholland at a S.A.M. banquet held in New York City at the Hotel McAlpin, includes Harry Houdini, Howard Thurston, Adelaide Herrmann, The Floyds, Oscar S. Teale, A.M. Wilson, Dorny, Harry Blackstone Sr., Horace Goldin, Frank Ducrot, and Francis J. Martinka.

This sale's selections of fully provenanced props and apparatus, as well as antique conjuring materials, are certain to catch the eye of collectors.

•    Lot #78, Les Levante's Great Levante’s £1000 Steel Trunk Mystery and related paperwork, is estimated $3,000-6,000. This c. 1930s-era trunk was featured the magician's show for decades. In effect, Levante changed places in seconds with an assistant who had been bound inside a bag locked inside the trunk by a committee of audience members.
•    Lot #66, handcuffs owned by Harry Houdini, are estimated at $2,500-5,000. They include an ID tag written in the hand of Joseph Dunninger, Houdini’s friend and fellow magician. It reads, "This pr. of handcuffs I present to my friend Rossi / they belonged to Harry Houdini / Dunninger.”
•    Lot #96, a c. 1850 J.K. Böhmländer magic set and associated paperwork, is estimated at $3,000-6,000. This kit consists mostly of wood-turned tricks, including two egg transposition vases, a millet bell, a rattle vase, a magic awl, a barrel puzzle, a ball vase, large and small coin vases, a metal magic funnel, a paper troublewit, and others. This outstanding German set is probably the earliest and finest magic set presented by Potter & Potter Auctions ever.

Also on offer are a spine-tingling selection of antique to contemporary magic-related books.

•    Lot #22, Cardini’s stage-worn tuxedo, is estimated at $8,000-12,000.  This wool swallowtail coat, with striped pants, was tailor-made for Cardini in London by Sidney Fisher in 1933. It is sold with a set of spats, a pocket handkerchief, a cravat, a collar, a dress shirt from Selfridge’s, and a top hat. This outfit includes a letter of provenance from Cardini’s daughter.
•    Lot #91, a sculpture by John Rogers titled The Traveling Magician, is estimated at $2,500-5,000. Made in 1878, this example shows an itinerant magician performing for three children; he produces a rabbit from his hat, while a secret assistant holds a pigeon behind the table, in readiness for the next trick.
•    Lot #9, a 2" diameter pewter medallion made for John Henry Anderson, the Great Wizard of the North, is estimated at $2,000-3,000. This award, made in England around 1849, is decorated with a bust portrait of Scottish magician on one side and a portrait of Queen Victoria, for whom Anderson was commanded to perform before Balmoral Castle on August 28, 1849, on the other.

According to Gabe Fajuri, President at Potter & Potter Auctions, "This change of pace for our magic auctions - usually five hundred lots or more - is something we've been toying with for months, and are thrilled to have finally brought to fruition. While not every item in the sale is dear (in terms of its price), there are many lots that are historically significant or carry an association with one (or more) magicians of yesteryear that make them appealing. For example, the photograph of Al Baker inscribed and signed to his publisher, Carl Jones, may not be a high ticket object, but it does tell a story about the relationship between the two men, just as the Winston Freer levitation manuscript does. This kind of tale telling is what makes collecting an endlessly fascinating pursuit to so many in the magic field, and for that reason, I'm banking on strong results on auction day."