Gutenberg Bible Leaf to be Auctioned

Los Angeles – A scarce Gutenberg Bible Leaf from the 15th Century made From the moveable type that ushered in the Enlightenment by democratizing knowledge through mass production of literature will be auctioned by Nate D. Sanders Auctions on March 25, 2021. 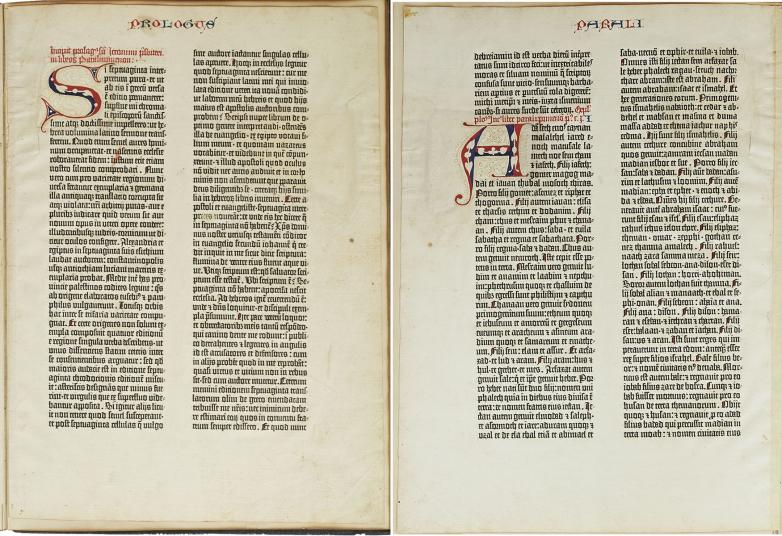 The Bible was printed by Johannes Gutenberg in Mainz, Germany from 1450-1455. There are less than 50 complete or near-complete copies of the Gutenberg Bible extant, with nearly all those housed in public institutions. Singular leaves are also scarce, with the leaf presented here having been acquired by bookseller Gabriel Wells, whose purchase of an incomplete Bible in 1920 gave way to selling the individual leaves alongside an essay by A. Edward Newton entitled ''A Noble Fragment.’’ The leaf is number 193 of the full Latin Bible, with the recto being the Prologue to 1 Chronicles of the Old Testament, and the verso the first part of Chapter 1 of 1 Chronicles. Each page features two columns of 42 lines in dark black Gothic type, accented by red and blue rubrication. Each copy of the Gutenberg Bible differs in its rubrication and illumination, with buyers at the time deciding upon these embellishments after the Bible was printed. The six-line rubricated letters of this leaf were likely added later, restored to match the original style.

Additional information on the leaf can found at:
https://natedsanders.com/Gutenberg_Bible_Leaf____Scarce_Leaf_From_the_15th_-LOT59534.aspx