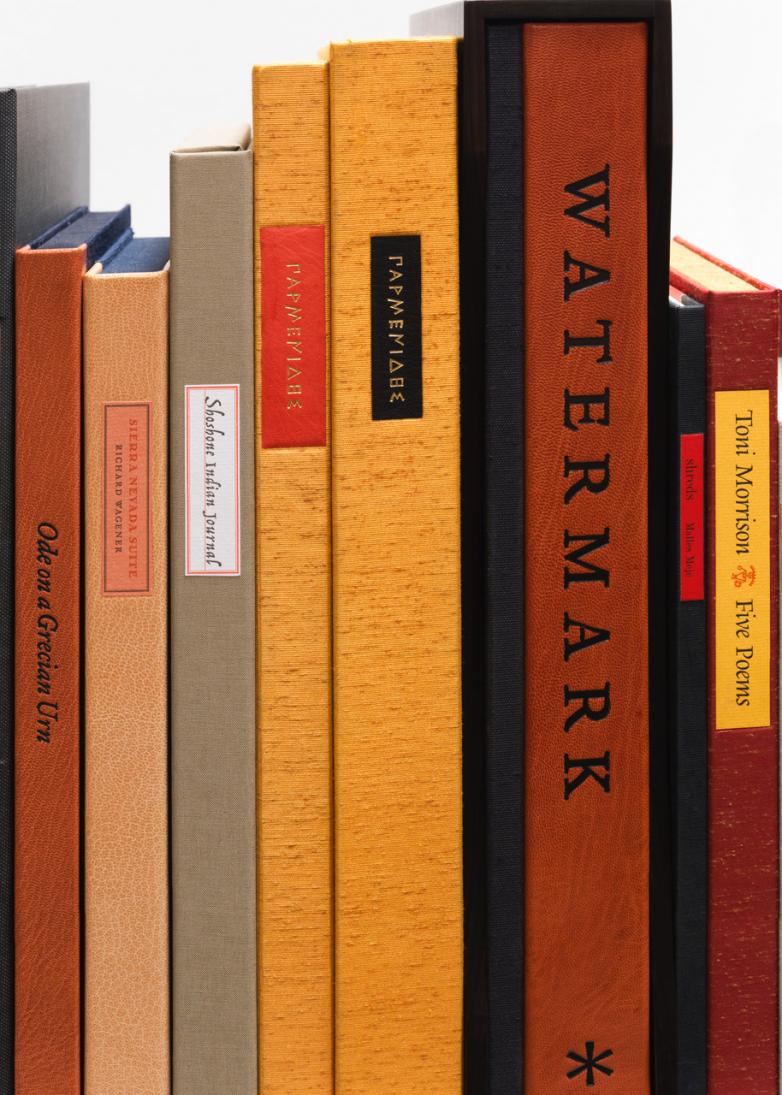 New York — Peter Rutledge Koch has been designing and printing limited edition books, portfolios, and ephemera since 1974. He has long been recognized as one of the most accomplished printers and typographic designers of his generation. His training, influences, and achievements place him in the lineage of San Francisco literary fine press printers. A forty-five-year retrospective opens at the Grolier Club on September 11 and remains on view through November 23, 2019.

The works on display, published by Koch between 1974 and 2019, span wide-ranging territory, from cowboy surrealism to pre-Socratic philosophy, and from contemporary and Renaissance poetry to hard-hitting photo-based requiems to the American West.

Koch spent his youth in Montana, steeped in the lore of the American West and witness to its aftermath of environmental and cultural destruction, which continues to influence his work more than four decades later. His aesthetic was subsequently shaped by apprenticeship to the great San Francisco printer Adrian Wilson as well as close study of the work of Jack Stauffacher and William Everson, and matured through various imprints in studios in San Francisco, Oakland, Berkeley, and Venice.

Point Lobos (1987) was Koch’s first mature contribution to the tradition of Bay Area fine press printing as well as his first post-Black Stone Press publication and remains a masterwork. It consists of a portfolio of fifteen poems by Robinson Jeffers and fifteen photographs by Wolf von dem Bussche (Peter and the Wolf editions) housed in a black walnut slipcase.

In 1990, with Herakleitos, Koch began a series of works by Greek pre-Socratic philosophers that ventured into a new realm of art practice. “Herakleitos led me out of the framework of traditional typographic refinement into what I believed to be the arena of the book as a work of art,” he said in a 2015 interview. Several works based on Greek philosophical texts followed. The Fragments of Parmenides (2004), a ten-year, multi-faceted collaboration with poet/translator Robert Bringhurst, stonecutter Christopher Stinehour, type designer Dan Carr (whom Koch commissioned to cut and cast a new Greek type for the edition), typesetter Richard Seibert, engraver Richard Wagener, and bookbinders Peggy Gotthold and Daniel Kelm.

The 2005 bicentennial of the Lewis and Clark expedition became a galvanizing point for a group of publications described collectively as the “Montana Suite.” To date, this group of work consists of four titles: Hard Words (2000); Nature Morte (2005); The Lost Journals of Sacajewea (with writer Debra Magpie Earling, 2010); and Liber Ignis (with poet Adam Cornford, 2015). Each work reveals aspects of the transformation of the American West by European migration and the destruction of native territory and traditions through what Koch describes as “photo interventions.” Describing his motivation, Koch says “by my fifty-seventh year, I had buried most of my Montana family and inherited their books and manuscripts, as well as their dreams and responsibilities. I came, finally, to the realization that I owed a deep debt to the land and tribe(s) I grew up in. . . .I had the tools and the knowledge to shape a new way of seeing Montana, shorn of the myths that I was expected to swallow—especially the gospel of Manifest Destiny and all the inglorious puffery about civilizing the American West.”

Poetry—contemporary American, classical Greek, and Italian Renaissance—forms the warp of Koch’s publishing cloth; its weft is the creative work of his many collaborators, whose engravings, etchings, drawings, collages, and paintings accompany and animate the texts he chooses to print. Richly varied but never predictable, Koch’s work has an integrity that arises out of his engagement with ideas, and design solutions that, in his own words, “cut close to the bone of meaning and content.”

In addition to traditional codex fine press books and portfolios printed on paper, Koch at times expresses his ideas in varied formats he refers to as “text transmission objects.” Materials include the use of lead as a printing substrate, acid-etched zinc plates, and innovative binding structures and housings custom-designed to support the pages. The Defictions of Diogenes (1994) presents twenty-one short philosophical performance pieces by Thomas McEvilley based on the life of the arch-cynic Diogenes of Sinope (b. 404 BC).  The text is hand-lettered by Christopher Stinehour, printed letterpress from zinc engravings onto lead tablets by Koch, and housed in a unique ceramic box by sculptor Stephen Braun.

Koch is co-director with his wife, art conservator Susan K. Filter, of the Codex Foundation (est. 2005), devoted to preserving and promoting the book as a work of art. The foundation organizes the biennial CODEX International Book Fair and Symposium, which brings artists who work in the form of the book from all over the world to the Bay Area with support from Stanford Libraries among many other institutions and individuals.

To accompany the show is a heavily illustrated three-volume catalogue. For a full description of the catalogue see www.peterkochprinters.com. The Grolier Club exhibition originated with Stanford Libraries Department of Special Collections, the repository of Koch's archive.

In conjunction with the exhibition, the Grolier Club will host a joint Symposium on artists’ books with the CODEX Foundation: A CODEX/Grolier International Symposium: The CODEX Effect: A Conversation Between Artists, Curators, Scholars, and Collectors, October 18 -19, 2019, at the Grolier Club. For more information and tickets go to www.codexfoundation.org