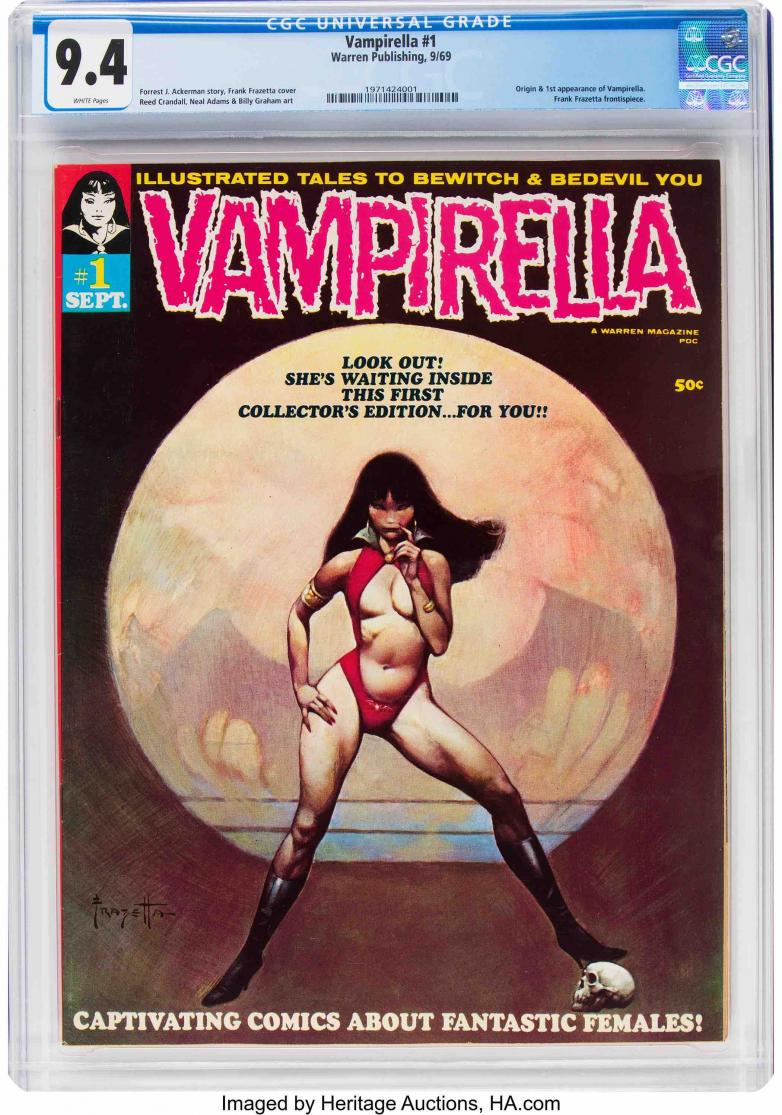 The sale enjoyed enormous popularity among collectors, resulting in sell-through rates of 100% by value and by lots sold.

“Nobody has ever done an entire auction devoted to certified magazines before, but the results showed there’s demand for this niche,” Heritage Auctions Vice President Barry Sandoval said. “Many of these are harder to find in the highest grades than comics from the same era, since the larger size made them harder to store.”

Nearly two dozen bidders made a play for Vampirella #1 (Warren, 1969) CGC NM 9.4 White pages before it sold for $7,200 to lead the sale. With a cover and frontispiece by Frank Frazetta, art by Neal Adams and Reed Crandall and a story by Forrest J. Ackerman, the issue includes the origin and first appearance of Vampirella. According to the February 2020 CGC census, there are 21 copies carrying a grade of 9.4, and only four graded higher.

Playboy #1 Red Star Copy (HMH Publishing, 1953) CGC FN/VF 7.0 White pages was enormously popular, pulling in bids from 34 collectors before finishing at $6,600. The “Red Star” variant of the first issue is much more rare than the “regular” and “Page # Copy” versions, a measurement made clear in CGC’s census. To date, the census has certified 2,667 copies of the regular version, 69 copies of the “Page 3” version and just 23 copies of the “Red Star Copy” version. This copy was just the fifth sold through Heritage Auctions.

Eerie #2 (Warren, 1966) CGC NM/MT 9.8 White pages brought $3,600 after prompting bids from 15 collectors. The first magazine-sized newsstand issue includes the first appearance of Cousin Eerie behind a cover by Frank Frazetta. According to the February 2020 census, this pristine copy is one of just two boasting a CGC grade of 9.8, with none higher.

More than a dozen collectors went after Vampirella 1972 Annual (Warren, 1972) CGC NM/MT 9.8 White pages until it finished at $3,360. The only known copy carrying a grade of 9.8, with none higher, this issue with the notorious Asian skull cover and art by Jose Gonzalez includes the retelling of the origin of Vampirella.

More than two dozen bidders chased the final price for MAD #66 Pacific Coast Pedigree (EC, 1961) CGC NM 9.4 Off-white to white pages all the way up to $3,120. The issue with the “JFK cover” by Kelly Freas includes art by Mort Drucker, Joe Orlando, Antonio Prohias and Dave Berg, and is one of just two copies with a grade of 9.4, with none higher, according to the February 2020 CGC census.

Sandoval said that even the discontinuation of some popular titles has not hurt the demand among collectors for magazines from years past.

“While both Playboy and MAD have recently ceased publication, it’s pretty clear that the classic 1950s/1960s issues of both are much sought-after in collectible condition,” he said.