First Bible on the Moon Lands at Bonhams 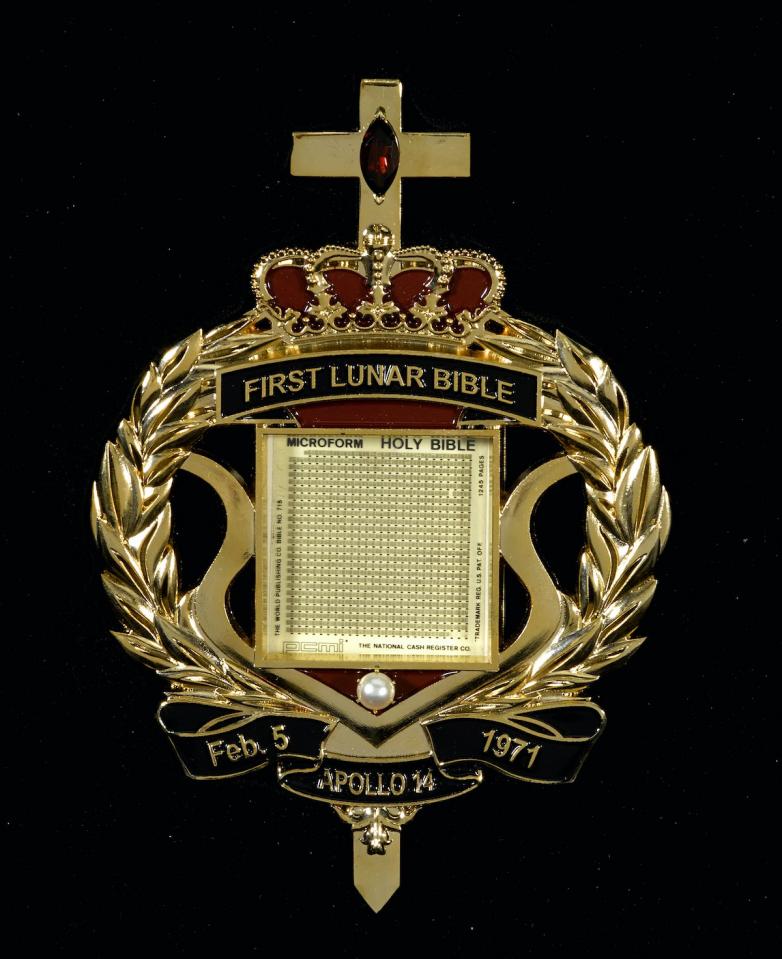 Los Angeles — As Edgar D. Mitchell boarded the Apollo 14 he knew that if the mission was successful he would be just the 6th man to walk on the Moon. Boarding the aircraft with him, in his personal bag, lay copies of the King James Bible. Upon touchdown on 5 February 1971 they became the first scripture and published work to land on the Moon. The extremely rare Lunar Bible – which is mounted and framed in a gold and enamel setting – measures just 4.1 square centimeters, with all 1,245 pages of the King James bible condensed and printed on a single microfilm square. Eleven of the bibles were authenticated by Edgar Mitchell and the Rev. John M. Stout, a NASA information scientist and the director of the Apollo Prayer League, of which only seven remain in circulation. A copy of the ‘Lunar Bible’, as it became known, will be offered as part of Bonhams History of Science and Technology sale on November 5 in Los Angeles. It has an estimate of $20,000-$30,000.

Astronaut Edward White II, prior to his death in the tragic fire that killed all three crew members on the Apollo 1 mission, told the press that he hoped to carry a Bible to the Moon. This goal resonated with the Rev. John M. Stout, who, along with his family, founded the Apollo Prayer League in 1968 in memory of the Apollo 1 casualties. Their first act was to start the Lunar Bible initiative – the mission statement of which read ‘to pray for the safety of the astronauts and the skill of NASA employees who built the rockets they would fly’. The core mission however was ‘most importantly to land the bible on the Moon’. They placed the good books onboard Apollo 13 (1970) however it failed to land. So it wasn't until February 5th, 1971, when Antares, Apollo 14’s Lunar Module, touched down that the bible finally reached the Moon.

Bonhams specialist in Books and Manuscripts L.A., Adam Stackhouse said: ‘We are very excited about offering the ‘Lunar Bible’ as part of our History of Science sale. This is a physical embodiment of a rare part of our recent history where breakthrough scientific innovation and religious faith converged in their shared quest to uncover the truth of our lived reality. This lot has profound significance not only to space collectors, but also to religious communities’.

•    A Highly Important Darwin Manuscript- An exceptional manuscript lead for The Descent of Man, articulating the central theme, and differing markedly from the published text. The culmination of Darwin’s theory of evolution, The Descent of Man demonstrates that all human beings are members of a single species. Darwin’s most important and original contribution to the issue of human evolution testifying to the unity of the human species and explaining the basis for mankind’s variegated races. This leaf is a critical resource for our understanding of the historical development of Darwin’s argument in The Descent, as well as the general development of his theory of evolution. It is estimated at $250,000-$350,000

•    Lumière Cinematograph Motion Picture Camera – The Lumière brothers were the first to develop a consistent working system for capturing and projecting moving pictures on celluloid. They patented their camera, the Cinématographe, in 1895 and made their first film with it, Sortie de l'usine Lumière de Lyon, that same year. The first 10 examples of their camera were produced that year but these were prototypes that weren’t sale. It was in 1896 that they were available to the public and the present example comes from that batch of 240 produced, numbered 10-250. Only about 450 total examples of this model were known to have been produced before the design was altered in 1898. It is estimated at $70,000-90,000.

•    5 offprints, including some from ‘Dialectica’, written by the Austrian-born mathematician, logician and philosopher, Kurt Gödel. Considered one of the greatest logicians since Aristotle, Gödel was close friends with Albert Einstein due to their time spent together at the Institute for Advance Study at Princeton. The one-of-a-kind documents are inscribed and signed, by Gödel, to the economist Oskar Morgenstern who was one of the founders of game theory. It has been said that Einstein, growing weary of his own work, only attended the institute to have the privilege of walking home was Gödel such was the Austrian’s intelligence. It is estimated at $40,000- $60,000.

•    Texas Instruments “Cal-Tech” prototype hand-held calculator. An important step along the way to the current state of microelectronics. The ‘Cal-Tech’ calculator was the first widely marketed consumer product to use integrated circuit boards. This prototype is one of only two in existence – the other is in the Smithsonian museum in Washington D.C. The hand-held calculator had a major impact on the public’s acceptance of the integrated circuit much like the pocket radio pushed the acceptance of the transistor. There is a linear path from this prototype to the iPhone in your pocket today.  It is estimated at $30,000-50,000.

•    Gemini 133P Trainer Is a remarkable system used to train the Gemini astronauts at the Manned Spacecraft Center in Houston. Essentially a duplicate of the display panels and instruments found inside the Gemini spacecraft, Project Gemini was NASA's second human spaceflight program, which started in 1961 and concluded in 1966. Its objectives were to practice and perfect all of the techniques necessary for a Moon landing, therefore paving the way for the Apollo Project. It is estimated at $20,000-30,000.