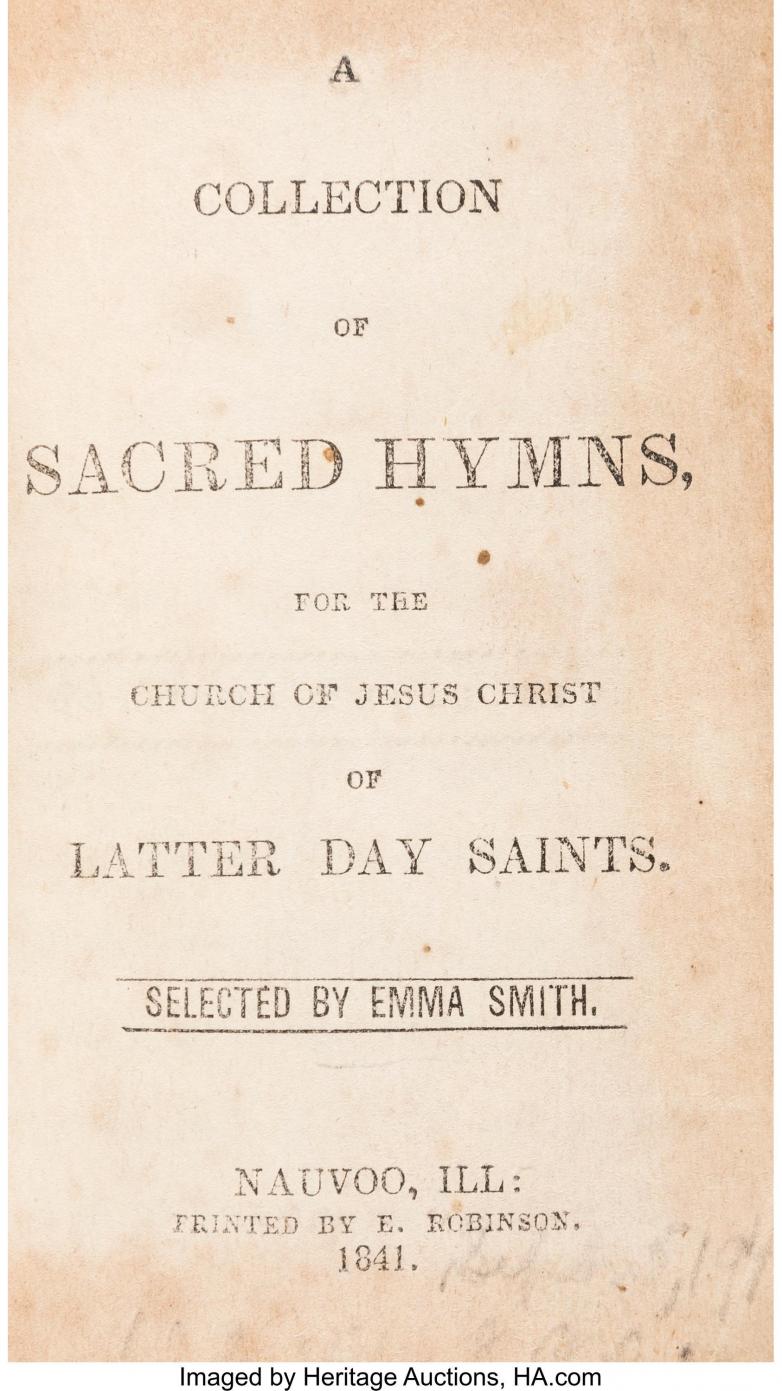 The rare first edition of the Nauvoo hymnal, Emma Smith's A Collection of Sacred Hymns, for the Church of Jesus Christ of Latter Day Saints (1841), sold for $100,000 at Heritage Auctions on March 4.

Dallas, TX – An extremely rare copy of The Federalist Papers that was personally given by James Madison to an American diplomat and a strong selection of literature related to the Mormon church and its founders boosted the total sales for Heritage Auctions’ Rare Books Auction to $1,608,905 March 4 in New York.

The two-volume copy of The Federalist: A Collection of Essays, Written in Favour of the New Constitution, as Agreed Upon by the Federal Convention, September 17, 1787 became the auction’s top lot when it sold for $312,500. The Federalist Papers are considered by American historians as the cornerstone of the new nation’s theory of government, written "to meet the immediate need of convincing the reluctant New York State electorate of the necessity of ratifying the newly proposed Constitution of the United States.” This copy was personally given by James Madison, one of the authors, to American diplomat and overseas consul James Maury.

“Madison and the other authors, Alexander Hamilton and John Jay, wrote under the ‘Publius’ pseudonym,” Heritage Auctions Rare Books Director James Gannon said. “The fact that this copy identifies one of the authors by name makes this a very important copy, and it alludes to the importance of Maury, both to the Founding Fathers and in representing the young nation and its political values overseas.”

The auction featured an outstanding collection of lots related to the Mormon faith, including:
•    $100,000: Emma Smith A Collection of Sacred Hymns, for the Church of Jesus Christ of Latter Day Saints is a rare first edition of the Nauvoo hymnal, Emma Smith’s second compilation. The volume compiled by the wife of Mormonism founder Joseph Smith contains no music but features an index of first lines.
•    $50,000: [Mormon Church]. [Joseph Smith, Junior, Oliver Cowdery, Sidney Rigdon, Frederick G. Williams, compilers] Doctrine and Covenants of the Church of the Latter Day Saints: Carefully Selected from the Revelations of God... is the second edition of the revelations to Joseph Smith, a rarity despite the fact that it is from a relatively large edition (believed to be 3,000 copies). The original intent was to issue 10,000 copies, but while printing was in progress at Zion (in Independence, Missouri), an anti-Mormon mob destroyed the press and most of the printed sheets, and even tore down the building housing the press.
•    $27,500: [Mormon Church]. Original Holograph Manuscript of Minutes for a General Conference offers a glimpse into the early Church of Jesus Christ of Latter-day Saints. These minutes cover the two days of the conference and mark the start time of each session. Important early leaders of the church are mentioned, including George Albert Smith, Orson Hyde and Joseph Young, the older brother of Brigham Young.
•    $23,750: [Mormon Church]. [Joseph Smith]. The Book of Mormon is a second edition, with copyright notice on verso of the title page, the testimonies of the three and eight witnesses immediately following on page 619 and a note to the reader at the foot of the testimony of eight witnesses.
•    $18,750: [Mormons]. [Brigham Young]. Edward W. Tullidge. Life of Brigham Young; or, Utah and Her Founders is an extraordinary first edition, Brigham Young’s copy with his signature in both pen and in pencil on the front free endpaper, and on four pages within the volume. Corrections, presumably by Tullidge, appear throughout.

A rare uncorrected proof copy of J. K. Rowling's Harry Potter and the Philosopher's Stone prompted bids from nearly three dozen collectors before selling for $40,000 – 10 times its pre-auction estimate. Of note is the fact that the title page includes the error, “J.A. Rowling” while the copyright page cites “Joanne Rowling” and has the complete number row descending from 10 to 1. This book is the first in Rowling’s hugely popular seven-volume tale.

Other top lots include, but are not limited to:
-[The Carolinas] The Humble Address of the Right Honourable the Lords Spiritual and Temporal In Parliament Assembled presented to Her Majesty on Wednesday, March 13, 1705 $38,750
-[Bill Wilson] Alcoholics Anonymous The Story of How Many Thousands of Men and Women Have Recovered from Alcoholism $37,500
-Edgar Rice Burroughs Tarzan of the Apes $32,500
-[Joan Blaeu. Atlas Maior] America. Quae est Geographiae Blavinae Pars Quinta, Liber Unus, Volumen Undecimum $26,250
-J. R. R. Tolkien. The Lord of the Rings, comprising: The Fellowship of the Ring $23,750