Bonhams to Offer Isaac Newton’s Reflections on God and Creation 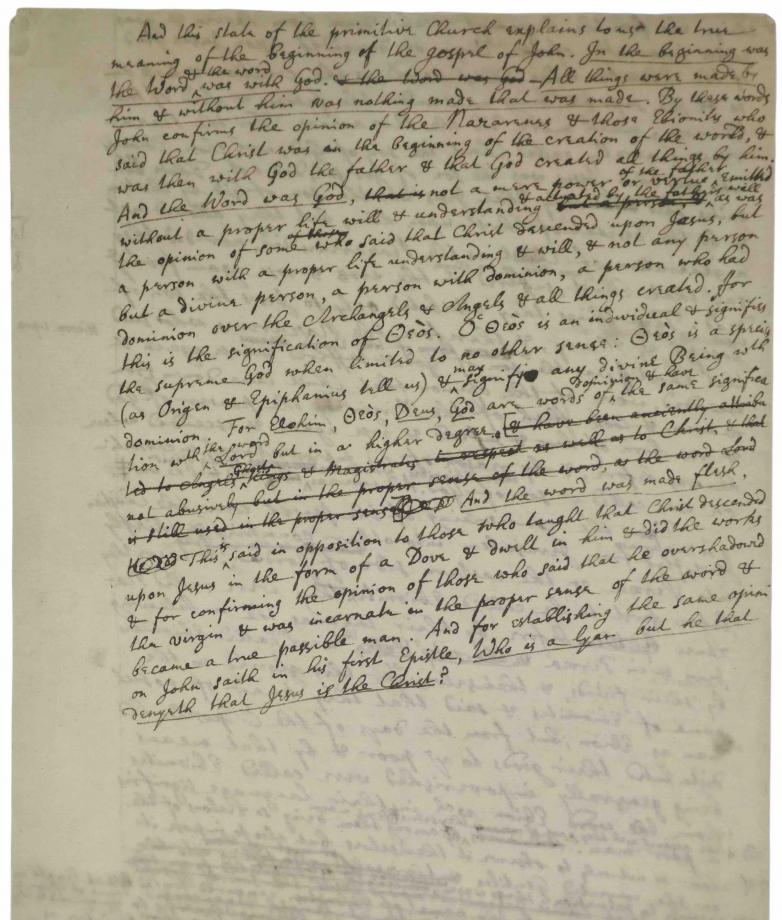 New York — An important handwritten Isaac Newton manuscript exploring the nature of God and creation is one of the highlights of Bonhams Fine Books and Manuscripts Sale on 6 March in New York. It has an estimate of US$100,000-150,000. Extensively reworked, underlined and amended, this manuscript advances our understanding of the theophysical underpinnings of Newton’s Principia – one of the most important works in the history of science – in which he expressed his theory of universal gravitation.

Darren Sutherland, Senior Specialist of Books and Manuscripts in New York commented: “This is the most significant Newton manuscript on theology to be offered at auction during the past 50 years – a spectacular example of Newton's penetrating genius at work. Illuminating Newton's personal view of God and His Word, this manuscript advances our understanding of the theophysical underpinnings of the Principia. Newton deemed his theological studies to be "a duty of the greatest moment" and the manuscript shows Newton at his most “dutiful”. With nearly all of Newton's manuscripts now permanently in institutions, the present manuscript is one of the most important remaining in private hands.”

Working at the highest level of metaphysics, and looking to the Gospel of John, the manuscript sees Newton contemplate the Divine Word at the core of Creation, inquiring both into its pre-existence and into its immanence ("incarnation"). Newton begins by analyzing the views of Christ held by the earliest Christian sects (based on Epiphanius's Against Heresies, 4th-century) and seeks to connect them to the Kabbalistic doctrines of the Sephirot and of the Adam Kadmon ("Transcendent Man"). Affirming in the concluding paragraph that "this state of the primitive Church explains to us the true meaning of the beginning of the gospel of John," Newton proceeds to articulate his understanding of "In the beginning was the Word..." – explicitly asserting his definition of God.

Written contemporaneously with his "General Scholium" that was added to the Principia in 1713, the manuscript casts valuable light on the conceptual foundations of Newton's physics. With the Scholium articulating a theophysical theory of the universe, the present manuscript offers Newton's direct testimony on the New Testament text that was most central to his theophysical theory of the Creation, John 1:1-5, and consciously echoes Genesis 1:1-5 ("Let there be light..."). Highlighting the two lines of the Creation ontologically, John 1:1-5 crucially links Newton's physics to his metaphysics, pointing to the very essence of Nature.