Antebellum Daguerreotype of Enslaved People Sells for $324,500 at Cowan’s 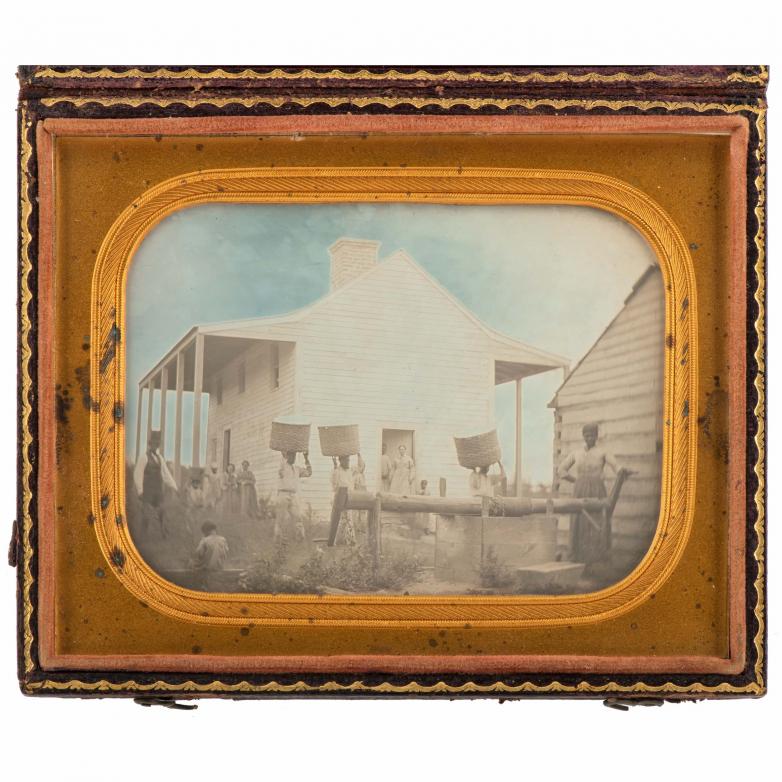 A rare antebellum quarter plate daguerreotype believed to be the earliest known image of enslaved African Americans with cotton sold for $324,500.

“We were privileged to sell this historic record of antebellum American History,” said Wes Cowan, Cowan’s vice chair and principal auctioneer. “Clearly, this was one of the most important daguerreotypes we’ve ever sold and as an auction house that regularly sells important historical photography, I don’t say that lightly.”

The daguerreotype was purchased by the Hall Family Foundation on behalf of the Nelson-Atkins Museum of Art in Kansas City, Missouri. The lot opened with an absentee bid at the starting price of $50,000 before a representative of the Nelson-Atkins Museum and two other phone bidders took over the action. After several minutes of back-and-forth bidding, the foundation emerged as the winning bidder when the hammer fell at $260,000. The inclusion of a 25% buyer’s premium resulted in a final sales price of $324,500. The photograph had been estimated to sell for $100,000 to $150,000.

“This daguerreotype makes a major contribution to the larger story of both American history and American photography, and is a significant addition to our daguerreotype holdings, an emphasis, dating back to 1995, in which we take considerable pride,” said Keith F. Davis, the senior curator of photography at the Nelson-Atkins Museum.

The daguerreotype is believed to depict the rural Greene County, Georgia plantation of Samuel T. Gentry (1798-1873). While other Gentrys lived in Georgia at the time this image was taken, Federal Slave Schedules from 1850 and 1860 indicate a mere handful were slave holders, and only one -- Samuel T. Gentry -- owned at least 10 slaves, the number depicted in this daguerreotype.

Samuel Gentry was no mere yeoman farmer, but neither was he a member of the upper stratum of the planter class. Between 1850 and 1860, he owned between 15 and 18 slaves, which would have been slightly more than the average Georgia slaveowner at the time. Most plantations worked by slaves at the time looked more like Gentry’s humble homestead than the large coastal plantations most often depicted in history, making this a rare look at the pervasiveness of slavery.

It is probable that Gentry commissioned this photograph to document his prosperity. The photographer carefully posed the scene so that the family “wealth” is clearly on display: ten enslaved African Americans are visible in the picture, with several displaying baskets of cotton perched atop their heads. Cotton – the production of which was made possible by Gentry’s slaves – is an integral part of the tableau.

“We are incredibly honored to have acquired this piece. We appreciate that it depicts a scene from a difficult time in American history and is important to many different communities,” added Jane Aspinall, curator of photography at the Nelson-Atkins Museum. “We feel fortunate that this previously unknown image will now become a part of our collective knowledge base, and will be preserved alongside our other treasured holdings of early photography.”

While the Gentry daguerreotype was the crowned jewel of the auction, there was significant interest across multiple categories that drove the auction as a whole well above its low estimate of $770,000 to a $1.1M total.

“We’re obviously excited to sell a daguerreotype for $324,500 but what I’m most proud of is seeing so much success across a broad spectrum of categories,” said Katie Horstman, Cowan’s director of American History. “Today proved that not only can we sell the blockbuster photography lots, but manuscripts, archives, relics, and ephemera from throughout American history.”

Photography of Native American subjects was the single hottest category of sale with four lots topping $30,000. The top lot of the category, and the second highest sales price of the day, was a William S. Soule album of Southern Plains Native Americans, which sold for $57,500. The album contained 40 albumen photographs of members of the Kiowa, Cheyenne, Comanche, Kiowa-Apache, Arapaho, and Wichita tribes, many identified.

Archives were another key driving force for the auction. An exceptional archive of the postmaster and Indian Agent of Fort Berthold in the Dakota Territory was the top lot of the category selling for $56,250. The archive spanned roughly 1865-1895 and provided enormous insight into the daily happenings and ongoing issues at Fort Berthold Indian Agency during a critical period.

Miscellaneous highlights from the auction included a rare Dr. W. F. Carver As He Appeared Before the Emperor of Germany poster that sold for $12,500; a John C. Fremont, Freedom's Candidate campaign flag for $10,625; an original manuscript treaty between the Sisseton Sioux and Arikara, Hidatsa, and Mandan in 1870 for $10,625; and a “respectfully forwarded” original manuscript of the same 1870 treaty that sold for $10,000.