Americana at PBA Galleries on December 17 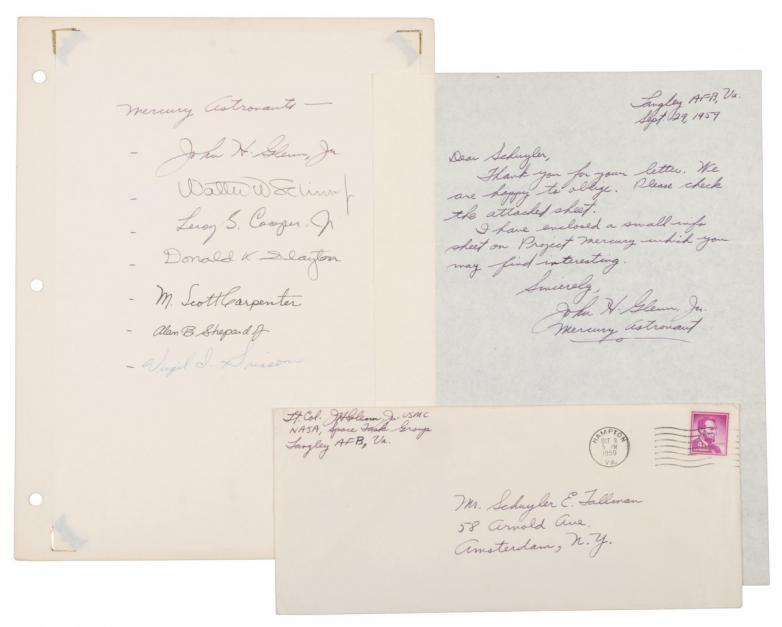 A letter signed by the “original seven” Mercury astronauts will be offered at PBA Galleries.

Berkeley, California – PBA Galleries will present an auction of Americana – Travel & Exploration – World History – Cartography on December 17th, 2020. Offerings include three-hundred and eighty lots of rare and varied material, an eclectic gathering of historical and cultural interest, with much on California and the western portions of the United States, but ranging beyond to the eastern seaboard, up to Canada, across the seas and around the globe. Included are printed books from four centuries, maps dating back to the 16th century, photography from its infancy through the 20th century, and an abundance of scarce ephemera.

Competitive bidding is expected for one of the sale’s headline lots, a mammoth plate albumen photograph by Carleton E. Watkins of the Cliff House, San Francisco. The photograph looks down from the dunes, Seal Rocks behind, the vast Pacific Ocean beyond, Watkins’ “photo wagon” parked in front (Estimate: $10,000-$15,000). Other views of San Francisco are represented in a rare real estate brochure for Richmond, California, 1911, with a striking full color “Aeroplane View” looking across the bay towards San Francisco and the Golden Gate (Estimate: $1,500-$2,500). The City also appears in a brilliant large color lithograph of the interior of the Sutro Baths on the western shore of San Francisco, measuring nearly seven feet square, the colors bright and unfaded (Estimate: $5,000-$8,000).

Other Americana in the sale spans the continent: New Hampshire is represented by a collection of fifteen daguerreotypes and ambrotypes of members of the Hill family of Greenland, New Hampshire, including various relatives and friends, and a view of the family farmhouse, circa 1848-1855 (Estimate: $3,000-$5,000). Further south, Texas; Ein Handbuch für deutsche Auswanderer, 1845, a rare handbook for German immigrants was published the year before Texas was absorbed into the United States (Estimate: $8,000-$12,000).

In world history, the auction block will see an engraved chart of a portion of the Swedish coast and points inland by Lucas Jansz Waghenaer, c.1585, with engraved vignettes of sailing ships, sea monsters, farms, villages, and other features (Estimate: $1,500-$2,500). Books feature in the sale, as well: The Gold Mines of Midian, by Richard F. Burton, the second edition, a presentation copy inscribed by the author and signed by him using his Arabic alias (Estimate: $1,500-$2,500).

Other highlights include a sheet signed by the seven Mercury astronauts, being the second page of an autograph letter signed by John Glenn, “Mercury Astronaut,” dated Sept. 29, 1959, with envelope hand-addressed by Glenn (Estimate: $5,000-$8,000). The Confederate States of America, Register of Vessels, April 7, 1862 is a rare document from the Confederacy, listing the fifty-four-ton schooner “Blanchette,” John F. Gilbert the Master (Estimate: $3,000-$5,000).

PBA continues to safeguard the health of employees and clients by remaining closed to the public. PBA will limit live auction participation to online or phone bidding. For more information about upcoming sales or to schedule a Zoom preview or phone bidding for a future auction, please contact the galleries at 415.989.2665 or pba@pbagalleries.com.