1790 Newspaper Reporting on Washington’s Presidential Address to be Auctioned 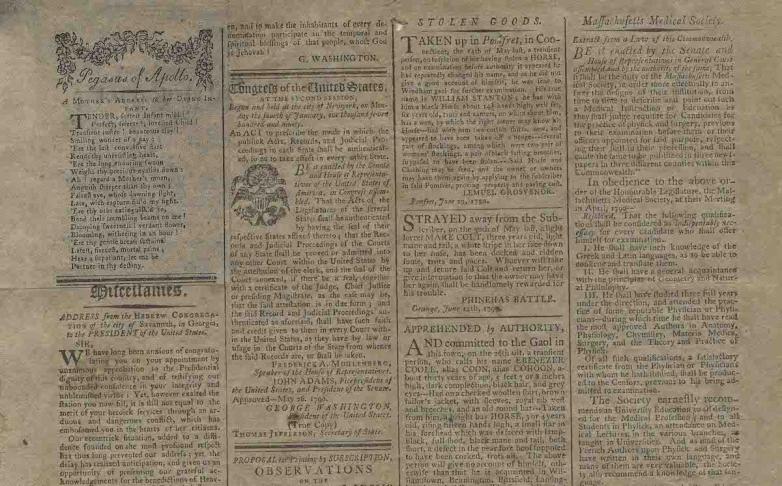 The July 1, 1790 issue of the Massachusetts Spy: Or, The Worcester Gazette.

Los Angeles – One of the earliest printings of George Washington addressing America's Jewish community, contained in the July 1, 1790 issue of the ''Massachusetts Spy: Or, The Worcester Gazette,'' will be auctioned by Nate D. Sanders on April 29. Interested bidders may participate in the auction online.  In this seminal issue, Washington responds to an address made a year earlier on May 6, 1789 by Levi Sheftal, representing The Hebrew Congregation of Savannah, Georgia, which was the first Jewish congregation to address the new President, thanking him for his support of religious tolerance. That original address is printed here, entitled ''Address from the Hebrew Congregation of...Savannah...to the President of the United States,’’ along with Washington's reply, notably establishing a culture of religious tolerance and freedom in the United States. Washington's reply reads in part:

"I thank you with great sincerity for your congratulations on my appointment to the office which I have the honor to hold by the unanimous choice of my fellow-citizens, and especially the expressions you are pleased to use in testifying the confidence that is reposed in me by your congregations...

I rejoice that a spirit of liberality and philanthropy is much more prevalent than it formerly was among the enlightened nations of the earth, and that your brethren will benefit thereby in proportion as it shall become still more extensive; happily the people of the United States have in many instances exhibited examples worthy of imitation, the salutary influence of which will doubtless extend much farther if gratefully enjoying those blessings of peace which (under the favor of heaven) have been attained by fortitude in war, they shall conduct themselves with reverence to the Deity and charity toward their fellow-creatures.

May the same wonder-working Deity, who long since delivered the Hebrews from their Egyptian oppressors, planted them in a promised land - whose providential agency has lately been conspicuous in establishing these United States as an independent nation - still continue to water them with the dews of heaven and make the inhabitants of every denomination participate in the temporal and spiritual blessings of that people whose God is Jehovah. / G. Washington.”

Established in 1770 to support the American Revolution, the ''Massachusetts Spy: Or, The Worcester Gazette'' has its motto (''The Liberty of the Press is Essential to the Security of Freedom'') on its masthead in four languages, along with the Hebrew word meaning ''Liberty''. Overall in very good condition, an exceptionally scarce issue. An unrestored issue sold in Sotheby's ''Important Judaica'' sale on 4 December 2014 for $68,750.

Bidding on the newspaper begins at $18,000. Additional information on the newspaper can be found at  https://natedsanders.com/Important_Newspaper_in_the_History_of_Judaica_in_A-LOT59770.aspx