The Women Behind James Joyce 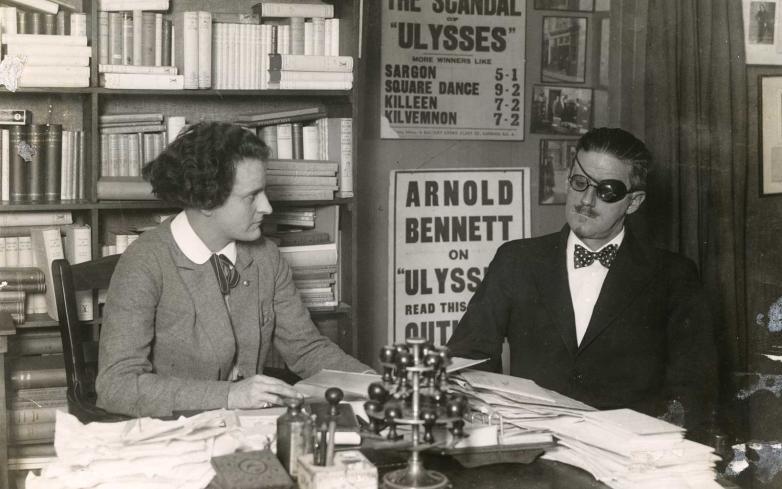 Sylvia Beach and James Joyce at Shakespeare and Company in Paris, 1922.

I am sitting in the beautiful, air-conditioned space of the gallery at the Harry Ransom Humanities Research Center, looking at Women and the Making of Joyce’s Ulysses, the Ulysses centenary exhibit I have curated. It is hard to believe we have got to this point, as this exhibit has been prepared in the era of Covid, and in a period when it has been impossible for me to visit Texas. The exhibit, on view through July 17, has come into being thanks to digital affordances and the tireless persistence and kindness of Cathy Henderson, associate director for education and exhibitions.

Women and the Making of Joyce’s Ulysses tells two stories. First, and building on my monograph, Serial Encounters: Ulysses and the Little Review (Oxford University Press, 2019), it tells the story of how Ulysses came into being, of how James Joyce wrote and published the vast and revolutionary modern novel we celebrate in this centenary year. Secondly it looks at the under-acknowledged role women played in facilitating the publication and realization of the work.

This second angle is rather broad because the exhibit considers the women in both the personal and professional aspects of Joyce’s life. Thus, May Joyce, Joyce’s mother, who died in 1903 at the age of forty-four after perhaps as many as seventeen pregnancies, is brought into dialogue with the estimable Sylvia Beach, who turned publisher in order to issue the first volume edition of Ulysses on February 2, 1922, the occasion of Joyce’s fortieth birthday. And Nora Barnacle, the Galway-born chambermaid who became Joyce’s lifelong partner on June 16, 1904, is in dialogue with Margaret Anderson and Jane Heap, the radical lesbian feminists who edited The Little Review, the American periodical in which Ulysses was serialized from March 1918.

The exhibit showcases more than 190 objects—a disparate collection of historic first editions, photographs, letters, manuscripts, and typescripts drawn from the Ransom Center’s unparalleled Joyce holdings, which have been supplemented with items borrowed from Buffalo, Cornell, Delaware, and the British Library. In putting these materials together, one issue that comes to the surface again and again is that of female labor: silent, administrative, editorial, emotional, domestic, and psychological—the kind of labor that makes things happen and can be invisible or undervalued.

Left: Exhibition curator Clare Hutton (right) with the Vice Counsel Niamh Clarke (left) of the Consulate General of Ireland in Austin, Texas. Right: A first edition of Ulysses, number 17 of 1,000 copies printed in Paris by Shakespeare and Company in 1922.

James Joyce, born in 1881, the same year as Virginia Woolf, was educated at a range of elite educational establishments, including Clongowes Wood College, a Jesuit boarding school, and University College Dublin, where he took a BA in modern languages, graduating in 1902. He wrote Ulysses between 1914 and 1921 in Trieste, Zurich, and Paris. During this period women were struggling on several fronts: struggling to acquire the right to vote; struggling to be taken seriously in the world of work; struggling to control their fertility; and, very often, struggling to gain access to the kind of education from which Joyce and many of his male peers benefitted. Any woman who became confident and active in the public sphere during this era did so in face of cultural forces that would have preferred they stay silent, largely out of sight, and ensconced in the domestic sphere. This is why we need to take the achievements of the women who enabled Ulysses seriously.

Certainly there were men who enabled Joyce too. Ezra Pound was practical and tireless in his advocacy of Joyce’s genius, and John Quinn, New York lawyer and patron of the arts, helped Joyce financially by arranging to purchase the manuscript of Ulysses long before the work was finished. But women played a crucial and formative role in enabling Joyce to create and realize Ulysses. Harriet Shaw Weaver (1876–1961) became acquainted with Joyce’s work in 1914, when The Egoist, the London periodical she edited, committed to the serialization of A Portrait of the Artist as a Young Man.

In due course, Weaver would become Joyce’s most loyal and important supporter. Faced with the hostility of London publishers to Joyce’s sexual candor, Weaver turned publisher and issued the first British editions of both Portrait (in 1916) and Ulysses (in 1922). From 1916, she gave Joyce significant sums of capital to enable him to commit to writing full time. By 1923, she had given him investments in the London stock exchange valued at £22,850, equivalent to about £1.3 or $1.7 million in today’s terms. This ensured Joyce’s steady income, as documents on display demonstrate.

Like Weaver, Sylvia Beach supported Joyce financially and as publisher of Ulysses. She gave him an astonishing 66 percent of the net profits on the first edition, and she quietly paid the enormous printing bill incurred by dint of the copious revision and extension to the text that Joyce made to Ulysses when it was in proof. Her tiny notebook, in which she meticulously recorded subscriptions for the first edition, is on display, and serves as a potent reminder of her careful labor behind the scenes. 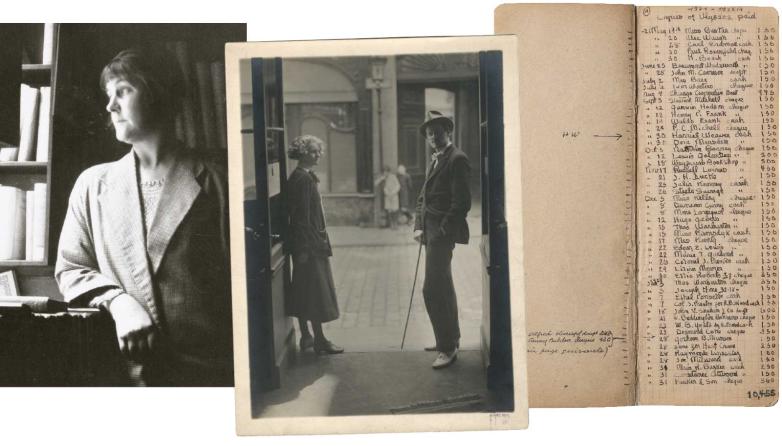 Beach came to know Joyce in July 1920, and was inspired to publish Ulysses because of the difficulties he was facing in the attempt to have the work published in London and New York. The serialization in The Little Review had ground to a halt in February 1921, when Anderson and Heap were judged guilty of publishing an obscene text: the third and final instalment of the ‘Nausicaa’ episode (in which Leopold Bloom masturbates on Sandymount Strand, while the fireworks of the Mirus bazaar explode in the background). The significance of this episode, and the trial it caused, is another rich narrative explored in the exhibit.

Supporting Joyce clearly came at a personal cost. When the legal judgement against The Little Review was handed down, Anderson found herself suffering “a nervous breakdown that lasted several months.” Beach’s patience also wore thin, particularly in the latter 1920s. She held Joyce in high esteem, but came to feel that his demands for material support were unreasonable. Even Weaver, who was endlessly patient, self-effacing, and demure, came to be estranged from Joyce in the latter 1930s.

In synthesizing these individual narratives, Women and the Making of Joyce’s Ulysses opens up new questions in the field of biography and aims to enable fresh and feminist readings of a book that continues “to keep professors arguing,” as Joyce himself once prophesied.