Pocket Watch From Ulysses Turns up at Bonhams in Paris 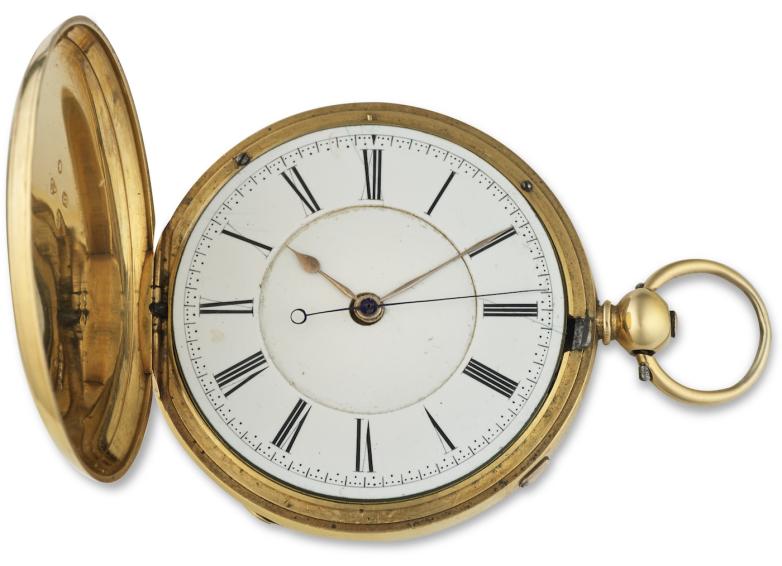 Paris – The action of James Joyce’s masterpiece Ulysses famously takes place over a single day in Dublin and so vivid is the author’s depiction of the city that it almost becomes a character in its own right.  As well as readily identifiable locations, Joyce also incorporated real Dubliners into his fictional world. These included the Superintendent of Glasnevin Cemetery, John O’Connell. At one point in the narrative Joyce mentions O’Connell’s watch and that same watch now leads Bonhams' Time is Precious Sale in Paris on Thursday 4 November. The 18ct gold hunter case pocket-watch and chain is estimated at £50,000-80,000.

The reference to O’Connell’s watch comes in Hades, the sixth episode of Ulysses. The novel’s central character Leopold Bloom travels with the funeral procession from Paddy Dignam’s house to Glasnevin cemetery where O’Connell was Superintendent (or caretaker as Joyce calls him). O’Connell regales the small group of mourners with an anecdote, an event described by Joyce as follows: “The caretaker hung his thumbs in the loops of his gold watch chain and spoke in a discreet tone to their vacant smiles."

John Kileen O'Connell (1844-1925) was Superintendent of Glasnevin Cemetery, and a well-known and respected Dublin character. In Ulysses, Joyce described him as a 'portly man', who "ambushed among the grasses, raised his hat in homage" as the coffin of the deceased Paddy Dignam passed by on a barrow.

Joyce had a strong association with Paris. He and his wife Nora moved to the French capital in 1920 having lived in Trieste, Zurich and Rome since leaving Ireland in 1904. It was in Paris in 1921 – 100 years ago – that Joyce finally completed Ulysses, on which he had been working since 1914. Although sections of the novel had appeared in literary magazines, the first full length edition of Ulysses was published in Paris in 1922 by Sylvia Beach of Shakespeare and Company.

Curator of the Time is Precious sale, James Stratton, said: “This watch has the most fascinating and unusual provenance of any I have ever encountered. To offer a tangible item from one of the most famous and influential novels of modern times is a rare privilege and something I never expect to be able to do again.”