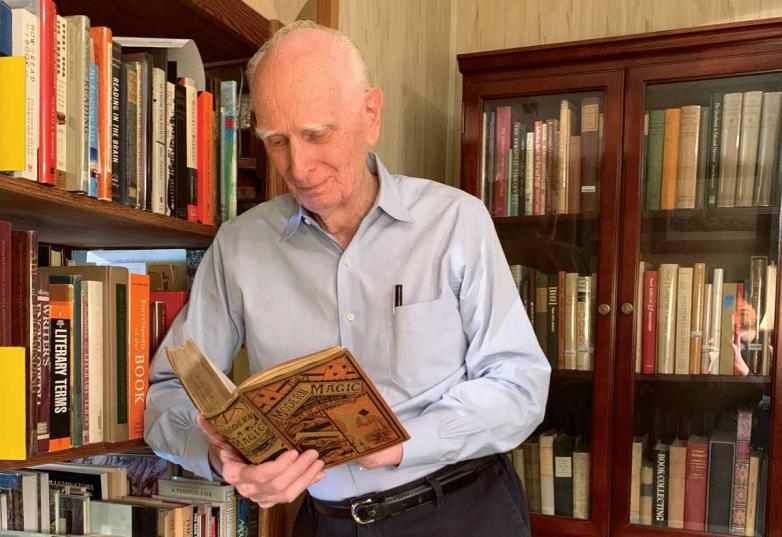 What’s up his sleeve is as interesting as what’s on his shelf: For the last sixty-five or so years, Leo Behnke has been a professional magician with a passion for collecting (and writing) books on magic. Why would a magician need a library? “Magic and medicine are probably the two subjects that have the most printed material on them in the world,” Behnke said. The opportunities for research and learning in this field are practically endless.

A tour of the library in Behnke’s home in Las Vegas, Nevada, involves not just flipping pages, but also slinging stories from days of yore. The eighty-six year old was one of the magicians at Disneyland when it first opened, and while there, he mentored a young Steve Martin (who called Leo’s card handling “hypnotic,” and his strict code of discipline influential). From Disneyland, Behnke went on to consult for television and films.

But books were always there. His first real magic book purchase was Modern Card Tricks and Secrets of Magic by Harry Blackstone (first published in 1932 and 1929, respectively, and then combined in 1941). After a stint in the navy, it was back to magic and more magical finds, like a 1766 edition of The Doctrine of Chance, a mathematical study of probability. Behnke’s fascination with cards, paper, and the physical artifacts of magic led to a greater interest in the preservation of these items, eventually bringing him to Las Vegas to work as the curator for David Copperfield’s magic library in 1993.

Moving to Las Vegas was a turning point as a collector, too. Behnke’s collection topped well over 2,000 volumes—a relatively small magic library, he explained, but a little much for him. “I found I was supporting the library instead of the other way around,” he said. He auctioned off all but one hundred books and started anew. He also met his wife, Pat McCarty, founder of the book preservation lab at the University of Nevada Las Vegas Libraries, and together they started Ace of Books, a book repair company. Thanks to Behnke’s expertise, they receive a large number of restoration requests from magicians, who send them magic books as well as playing cards and other magic paraphernalia.

In 2000, Behnke published The Conservation of Magic, a guidebook to preserving and organizing magic books, ephemera, and collectibles. The book isn’t simply about caring for and displaying objects at their best, it’s a guide to preserving knowledge and passing it on.

But herein lies a tricky question: Are there things about magic that shouldn’t be shared? Behnke dodges the query by explaining the controversy within the magic community: “It's divided. We don't really have a pat answer for that.” Some are against printing magic secrets entirely, while others point out that most readers will forget the trick after a while. “They're more interested in being entertained than in how the tricks are done,” said Behnke.

And there’s another reason why magic will still carry an appeal for audiences, no matter how many books are published on the subject—whether the magic on stage involves floating, producing money from thin air, or having control over the form of inanimate objects, the illusion “tugs that inner you, and you identify with what the magician is doing,” Behnke said. “It’s our dreams.”