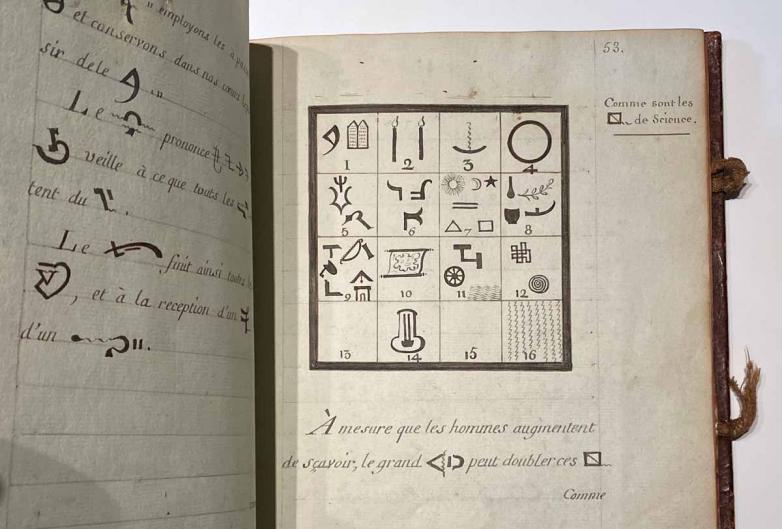 “Rites de Eon,” a ca. 1790s manuscript depicting religious and mythological symbols, is one of the highlights of filmmaker E. Elias Merhige’s collection.

It began with Begotten, filmmaker E. Elias Merhige’s 1989 black-and-white allegory about death and transformation. Championing the film were people like multimedia artist Chris Marker and author Susan Sontag who held private screenings in her living room. At one such screening Merhige met Dennis Jakob, Francis Ford Coppola’s script consultant on Apocalypse Now, who said to him, “Wow, you’ve created the first Hermetic film.” 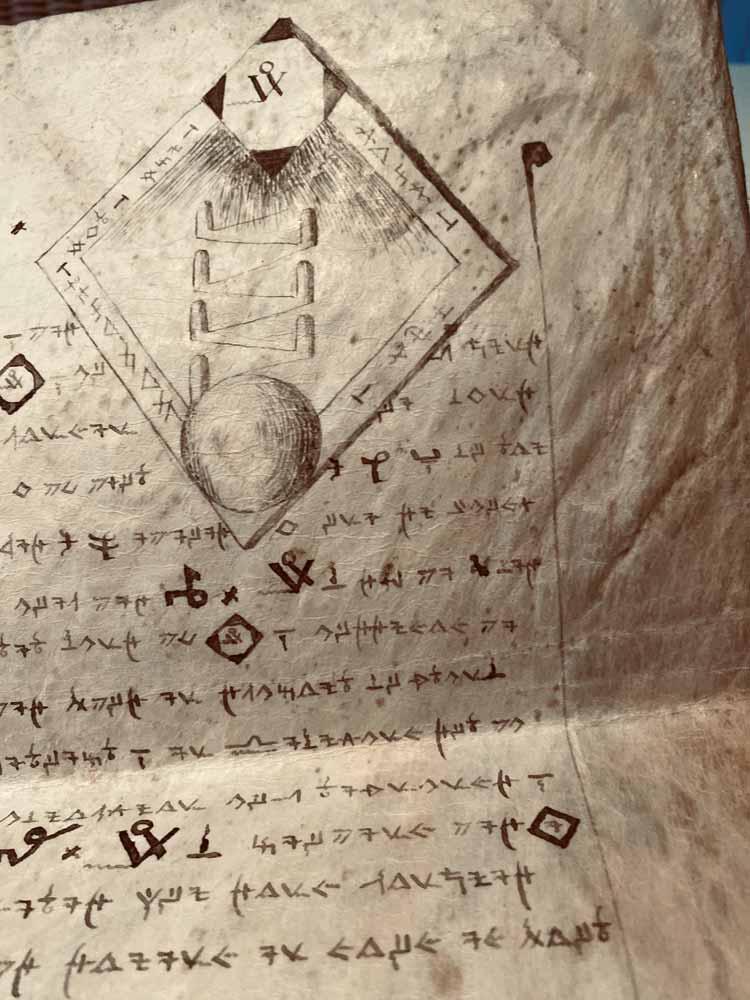 A sixteenth-century Zoroastrian manuscript on vellum.

Merhige, a first-time filmmaker and recent graduate of SUNY Purchase at the time, was sent scrambling to find out what he meant. His investigation led him to Hermes Trismegistus, associated with the Greek god Hermes and Egyptian god Thoth and author of the “Corpus Hermeticum.” In it he espouses an understanding of the universe based on principles of astrology, alchemy, and theurgy that recognizes not a separation, but a merging of opposites resulting in transformation and transcendence. While sixteenth-century Dominican friar Giordano Bruno was responsible for resurrecting these ideas, they were consolidated under German philosopher Jakob Böhme whose first book, Aurora, appeared in 1612.

Böhme’s writing became the cornerstone of a collection that numbers roughly 2,400 volumes, many dealing with mysticism and Freemasonry, areas that subsequently captured Merhige’s interests.

“If everything emanated from this one deity, how do you reconcile evil with good? What Christianity was doing was separating it between heaven and hell. What Böhme does is he connects it all together,” said Merhige, who applies the same concepts when writing characters and directing actors. “It helps me understand that nothing is that simple, nothing is one thing. No character is good, entirely, and no character is entirely bad. And what Böhme trains the mind to do is understand that this is actually part of life and existence.”

Merhige’s collection in his Beverly Hills townhouse includes subsequent titles by Böhme such as The Threefold Life of Man, Forty Questions on the Soul, and The Incarnation of Jesus Christ, along with a complete collection of the rest of his writings in their first English translations from the seventeenth century as well a second set of translations by William Law from the eighteenth century, a four-volume collection formerly belonging to the Earl of Cromer who served as consul general of Egypt from 1883–1907. 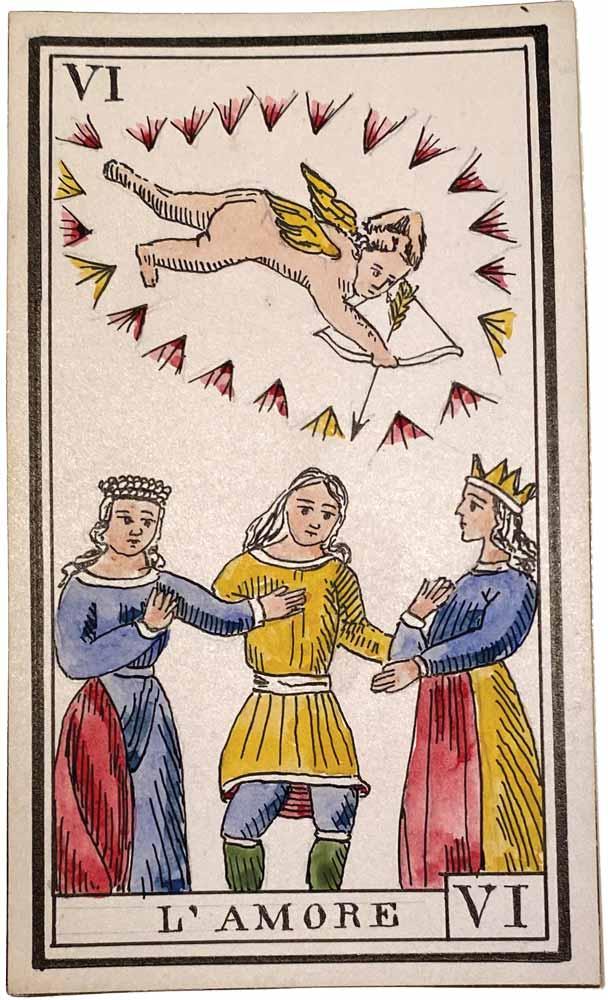 A card from an 1888 hand-painted tarot deck.

After a successful second film, 2000’s Shadow of the Vampire, which garnered Oscar and Golden Globe nominations, Merhige made the serial killer thriller Suspect Zero starring Ben Kingsley. It features an esoteric map inspired by a chart in a Zoroastrian manuscript dating to the 1590s from the filmmaker’s own collection. The manuscript consists of three components including two lambskin parchments with elaborate symbols Merhige hasn’t been able to decipher despite consulting with leading linguists at Harvard, Oxford, and the University of California Riverside. A second manuscript from 1790 is handwritten in French and describes the first manuscript. It also contains an extremely rare description of the Rite de Eons, a ritual practiced at the eighteenth degree of Freemasonry, one Merhige himself has achieved. A third manuscript, from the 1860s and also in French, elaborates on the first two.

Merhige’s expansive collection contains not just books, but esoterica like an 1888 hand-painted tarot deck bearing the stamp of Madame Blavatsky, who co-founded the Theosophical Society in New York. In London, where the deck is from, she established the Blavatsky Lodge in 1887, which inspired a like-minded organization, the Golden Dawn, the following year. Adherents included occultist Aleister Crowley, Sir Arthur Conan Doyle, Bram Stoker, W. B. Yeats, and actor Florence Farr, who, along with playwright Olivia Shakespear, wrote two plays in the Hermetic tradition, “The Beloved of Hathor” and “The Shrine of the Golden Hawk,” also part of the collection.

“This was privately printed circa 1902 for Yeats, Ezra Pound, and the closed circle of people around Florence Farr and Golden Dawn,” Merhige explained. “You might find it in the British Museum, but you’re not going to find this in someone’s private library.”

Shakespear and her daughter Dorothy met Ezra Pound at a London literary salon. The latter two were married and produced a son, Omar, whom Sontag encouraged Merhige to visit. “Sontag sent me out to Princeton and said you’re going to show this guy your film,” Merhige recalled. After the screening the filmmaker sat with Omar Pound and talked about his father and the connection to Jakob Böhme. “His apartment was buried in books,” Merhige remembered, and Pound gifted him the rare Farr-Shakespear edition. “It was an act of tremendous generosity.” 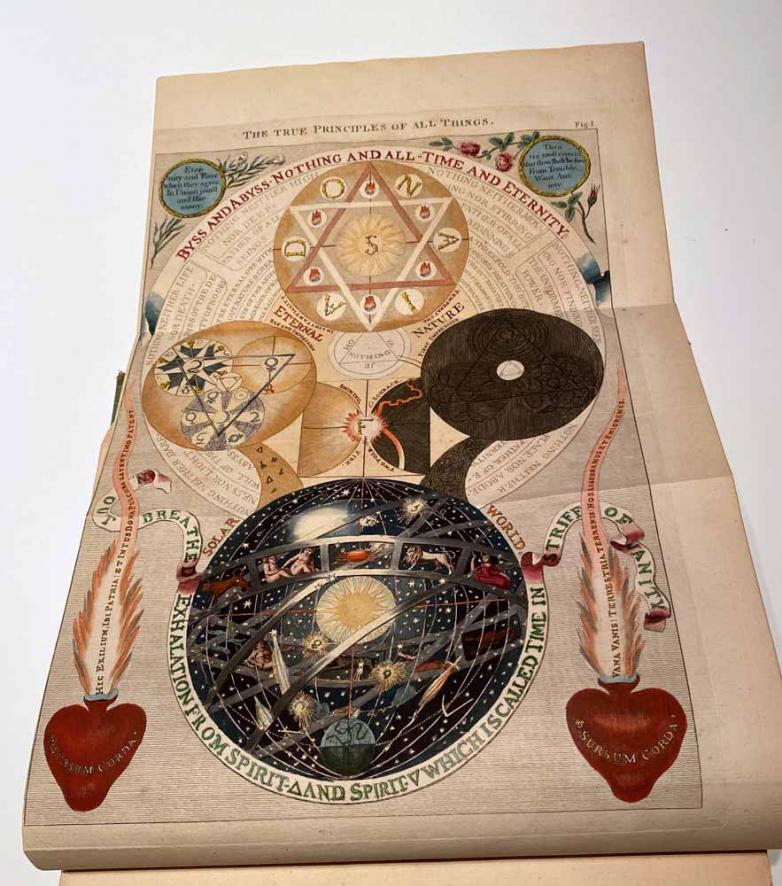 A hand-colored, eighteenth-century edition of the works of Jakob Böhme.

At the core of Merhige’s sprawling library are the two complete collections by Böhme, rarely if ever available at auction. “Without Böhme you wouldn’t have the Golden Dawn, you wouldn’t have what Schopenhauer and Nietzsche were doing, you wouldn’t have even Neo-Romanticism, people like Coleridge who owned the four-volume William Law Complete Works of Jakob Böhme. William Blake owned a set of those. And Goethe as well. These great poets that were part of this romantic scene all derived great inspiration from Böhme.”

For Merhige the library is not merely a compulsion, but a source of inspiration for his work, such as the currently-in-production cinematic cosmic opera, “Polia and Blastema,” an allegory told through the blending of two souls to achieve a transcendent new form. Nearing completion, his epic novel, Verilion, grapples with similar ideas grounded in the Hermetic tradition.

“All of these rare books that you’re looking at are really because of Begotten. It’s what led me to each one of these authors and books,” he said as he surveyed his collection. “Spiritually and intellectually the library as a whole functions as an extension of my poetic and philosophical imagination. To me poetry is the precursor of great cinema. The greatest movies have poetry as their muse.”