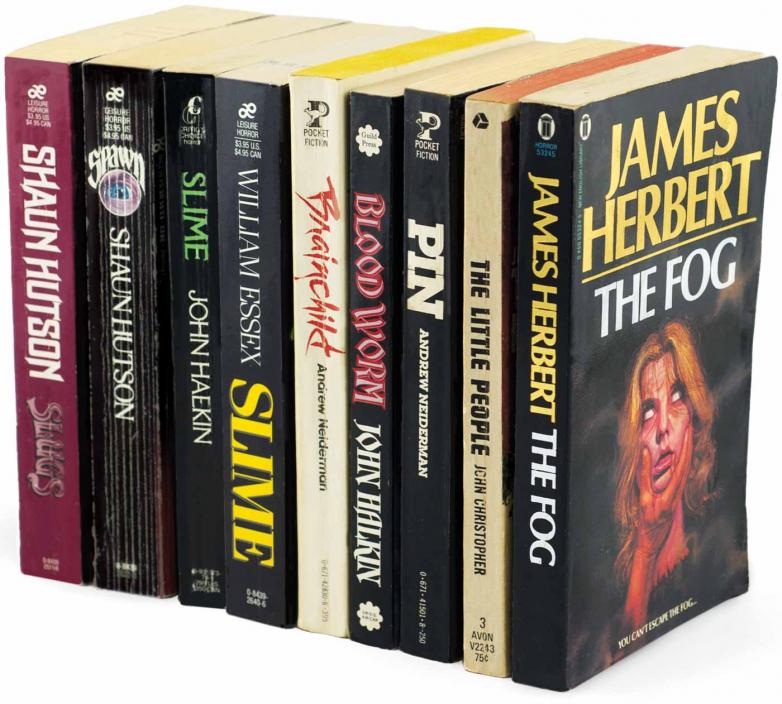 A selection of horror fiction paperbacks from the author’s collection.

Giant carnivorous cockroaches, demonic children, haunted houses, possessed dolls, killer clowns, Nazi leprechauns, and crabs on the rampage: all these and more lurk beneath the garish covers of a publishing category that flourished from approximately 1967 to 1991, bookended by the runaway bestseller Rosemary’s Baby and the successful film adaptation of Thomas Harris’s Silence of the Lambs. Fed by a constant stream of page-turners by Stephen King, Anne Rice, Dean R. Koontz, and V. C. Andrews, this genre thrived in the hothouse climate of Satanic Panic, Video Nasties, and the continual cultural fallout of the Swinging Sixties, delighting and terrifying a generation.

And now these nostalgic readers, joined by legions of curious fans, are pioneering a new collecting area, detailed in a 2017 book, Paperbacks from Hell: The Twisted History of ’70s and ’80s Horror Fiction by Grady Hendrix. A horror novelist himself, Hendrix described his descent into the irresistible black hole of collecting when he came across the eye-popping cover of John Christopher’s The Little People in a dollar box at a dealer table and wondered, “What else has been forgotten?” 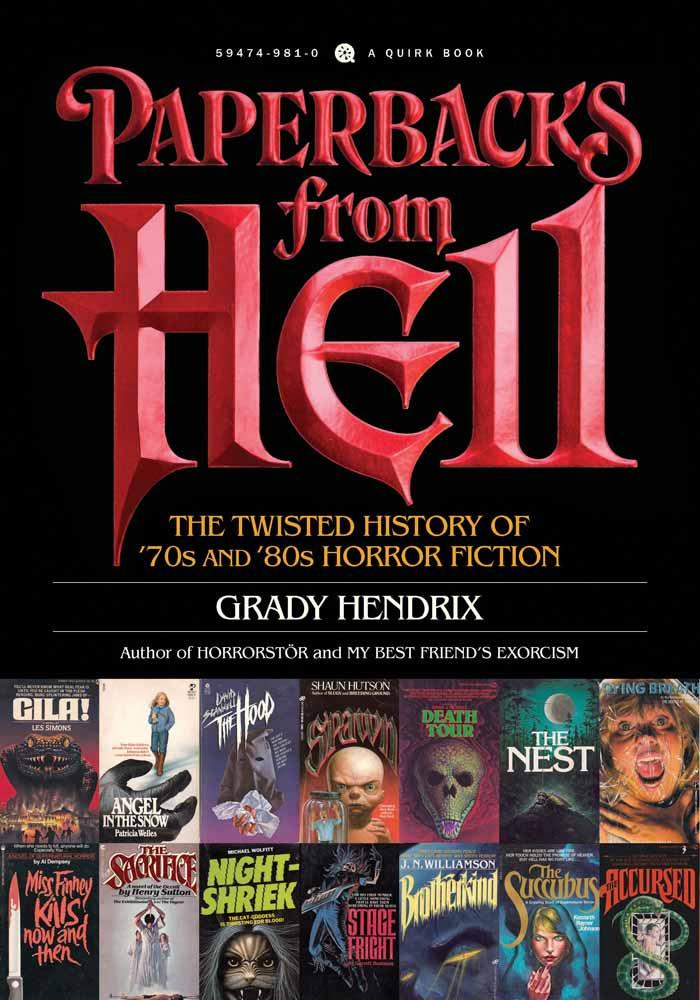 After Paperbacks from Hell: The Twisted History of ’70s and ’80s Horror Fiction was published in 2017, readers and collectors of the genre began to notice that the prices for their beloved, well-thumbed paperbacks were skyrocketing.

Paperbacks from Hell—often abbreviated to PfH by fans—would not have been possible without Will Errickson’s passionate blog, Too Much Horror Fiction, which he began in 2010, chronicling his odyssey to collect and read the best (and often the worst) of the paperback horror boom. Errickson’s lively reviews sent readers frantically hunting for such neglected and out-of-print gems as Joan Samson’s The Auctioneer (1975), Mendal Johnson’s Let’s Go Play at the Adams’ (1974; paperback 1980), and Kathe Koja’s The Cipher (1991). These three titles, which prompted the most-popular entries on the blog, provide instructive examples for the field. The Auctioneer was a paperback bestseller, but the untimely death of Samson and the failure of a promised film version to materialize caused it to be forgotten. Paperback first printings are now available for under $20, and it has since been reprinted by Valancourt Books (2018). Let’s Go Play at the Adams’ was first published in hardback in 1974, but it is the 1980 Bantam reprint which fetches the highest prices within the used/antiquarian book trade (currently around $85) because of the lurid cover showing a nubile babysitter gagged and tied to a chair. And while Koja’s The Cipher has since been reissued as an e-book, the paperback original—with a foil-embossed peek-a-boo cover—still sells for over $100.

Errickson and Hendrix both acknowledge that the blog and book have increased interest in the field and encouraged more sellers to price according to demand. “I do feel a bit bummed that PfH priced some of these vintage titles out of reach for non-collectors (and for me too), but truth is, that’s only if you’re buying online. I can’t recommend library sales and funky out-of-the-way used bookstores and thrift stores enough for finding old horror paperbacks cheap,” said Errickson.

Indeed, fifteen horror collectors contacted through Twitter and Instagram indicated a strong preference for finding books “in the wild.” As collector Victoria Duncan noted: “I have never bought a horror novel online…. I think this must have something to do with the fact that I started collecting young, before the Internet. I think I am chasing the high of finding a particularly spooky-looking cover as a child.” Most started collecting before the publication of PfH, but almost all expressed great love for Hendrix’s book and remarked that it had only increased their collecting frenzy. They are happy to see the books they love getting attention and to be in touch with a community of fellow enthusiasts. From the perspective of the history of collecting, it is also worth pointing out that rising prices are part of the cycle which leads to books being preserved, first by collectors and later by libraries.

“I feel enormous guilt at having driven up the prices for these books. On the one hand, I’m glad they're getting treated like they have value, and hopefully that will lead to more preservation,” commented Hendrix. “I want people to read these books, so it’s a knife in my heart when I see insanely high prices for books like Brenda Brown Canary’s The Voice of the Clown. Doing the line of reissues with Valancourt has been my attempt to expiate my guilt.” Hendrix refers to a series of five reprints of ‘Paperbacks from Hell’ classics, issued in mass-market paperback format this past spring and summer. While the collectors we interviewed had wide-ranging collecting practices, they had one important thing in common: every one of them avidly reads the books they collect. As Hendrix notes in the introduction to PfH, “these stories are timeless in the way that truly matters: they will not bore you.”

Errickson’s blog has since been joined by the blogs of other collectors, and Hendrix has given numerous PfH live shows, and is now adding a second part called “Think of the Children.” (Errickson’s wife, Ashley McGraw, is a pioneer in this arm of the genre marketed toward younger readers, collecting Christopher Pike, R. L. Stine, and other ‘teen scream’ luminaries). With the ’80s nostalgia inspired by Netflix’s television series, Stranger Things, showing no ebb, the cultural moment is right for all Hell to continue to break loose in the world of book collecting.