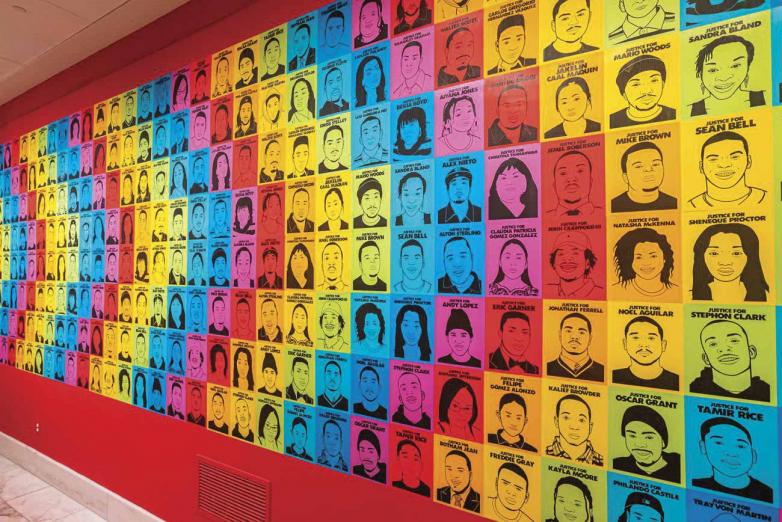 Gilberto Cárdenas was a college student in Los Angeles when El Movimiento, or the Chicano Movement, took shape in California. It was the height of the 1960s civil rights movement, when Mexican Americans were asserting their cultural heritage, challenging racist hierarchies, and rejecting assimilation in a country occupying their ancestral lands. Like many, Cárdenas began to identify as Chicano—a term originally used to denigrate Mexican Americans—to proudly reclaim his roots. For years, he photographed his community’s struggles, from protests for educational equity to the pivotal farmworkers’ strikes.

He also began collecting their art. Initially, Cárdenas preserved eye-catching political posters affixed to utility poles, storefront windows, and other public spaces. Soon, he was purchasing works on paper from Chicanx artists. He recognized a significance that others would overlook for decades to come. “Many curators were unable to understand the importance of Latino art as it began to emerge,” he said. “And people didn’t want Latino culture to be American culture. Often this work is seen as foreign work.”

As the museum world catches up, exhibitions are gradually honoring the complexities of Latinx art. Last November, the Smithsonian American Art Museum (SAAM) opened ¡Printing the Revolution! The Rise and Impact of Chicano Graphics, 1965 to Now, a show that places the achievements of Chicanx artists squarely within not just American history, but American art history. While it spotlights political work created during El Movimiento, it also demonstrates how those formative years planted seeds for an urgent consciousness that is alive and present in contemporary visual culture. “The graphic movement that started in the civil rights era is still relevant,” said SAAM’s deputy chief curator E. Carmen Ramos. “There’s a huge legacy and history that is pretty much excluded from the story of American printmaking.”

The 119 works on view, from linocuts to digital art, come from the museum’s holdings—an archive indebted to lifelong collectors and donors like Cárdenas, who today likely has the largest Latinx art collection in the United States. They make clear the lasting influence of Chicanx print networks advanced by players like the Los Angeles–based arts center Self Help Graphics; the serigraphy-focused nonprofit Serie Project in Austin, Texas; the San Antonio, Texas, artist collective Con Safo; and the United Farm Workers’ own print shop, El Taller Grafico. From these webs grew strong intergenerational mentorships between artists addressing enduring issues including labor abuses, police brutality, and immigrant rights. One can trace lineages between pioneering figures like Malaquias Montoya and Rupert García to younger artists such as Carlos F. Jackson, Juan Fuentes, Favianna Rodriguez, and Oree Originol.

The uncompromising forms and messages of Chicanx graphics have long fueled their dissemination, which has only become easier with the internet. Anyone can download a customizable template of Favianna Rodriguez’s pro-migration poster of a butterfly on the artist’s website. Or engage with augmented, reality-enhanced portraits by Xico González, who depicts myriad figures from a Palestinian girl to civil rights activist Yuri Kochiyama. His vivid images echo the magnetism and dignity of posters from El Movimiento that also honored everyday folks facing and fighting injustices, no matter their background.

The exhibition is filled with resonances between past and present, within the story of Chicanx graphics but also beyond it. “These works dovetail with a lot of debates about who we are as Americans, what our history is, and whose history is privileged,” Ramos said. “Our understanding of what is American is totally incomplete. When you include Latinx perspectives, it changes the whole picture.”