The Art of Bookish Baking 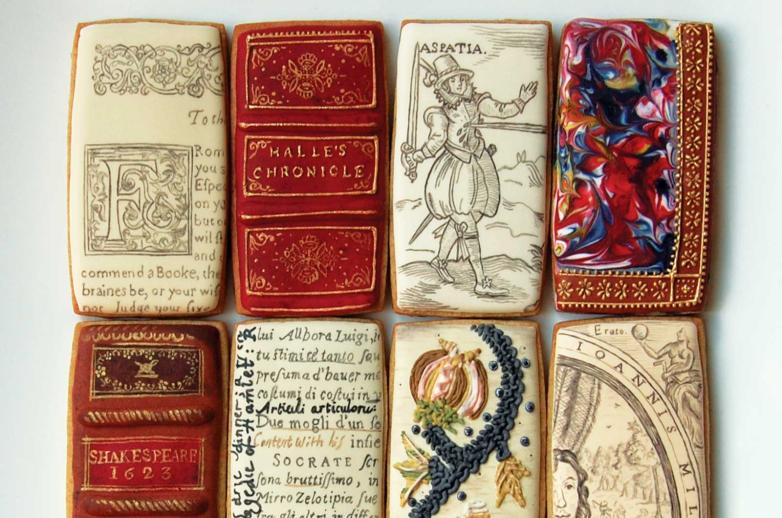 Shakespeare scholar Ella Hawkins bakes and designs intricately decorated cookies (or biscuits) that take a page from antiquarian books and medieval manuscripts. Her Austen-inspired cookies were made as part of the Jane Austen’s House Creatives in Residence program.

There are many ways of reinterpreting our cultural heritage, but Shakespeare scholar and historian Ella Hawkins has come up with one of the most wholesome.

“I was a committed hobbyist cake decorator for ten years before pivoting to biscuit art,” explained the teaching fellow in early modern English at the UK’s University of Birmingham. “I started designing biscuit sets in 2021 during the lockdown. It wasn’t possible to visit family or friends in person, and I had a lot of free time to fill. Biscuits were the perfect weekend project. I enjoyed making them and could send the finished products in the post to brighten somebody’s day.”

But these biscuits are not your standard cookie-cutter treat. They are inspired by early modern books, the work of Jane Austen, medieval manuscripts, Elizabethan fabrics, Tiffany glass, and William Morris designs.

“At first, my aim was to make biscuit sets that would mean something to the person I was sending them to. One box of cookies was inspired by a friend’s PhD project, including a portrait of Shakespeare, film reels, and theatre company logos. I then started creating biscuits inspired by my academic work on costume design, Shakespeare, and dress history. In each set, I try to capture and celebrate the aesthetic of a particular period, artistic movement, film or television show, or literary context. Sharing photographs of the finished biscuit sets has been a wonderful way of getting people excited about museum collections and history.”

At the end of 2021, Hawkins was the official artist-in-residence at Jane Austen’s House in Chawton, Hampshire. “I had digital access to the organization’s extensive collections and expertise,” she said. “Each biscuit set responded to a particular aspect of the author’s life, works, or legacy. For example, a patchwork coverlet made by Austen, her sister, and her mother inspired a set of diamond-shaped cookies that were hand-painted with patterns from various collection items.” 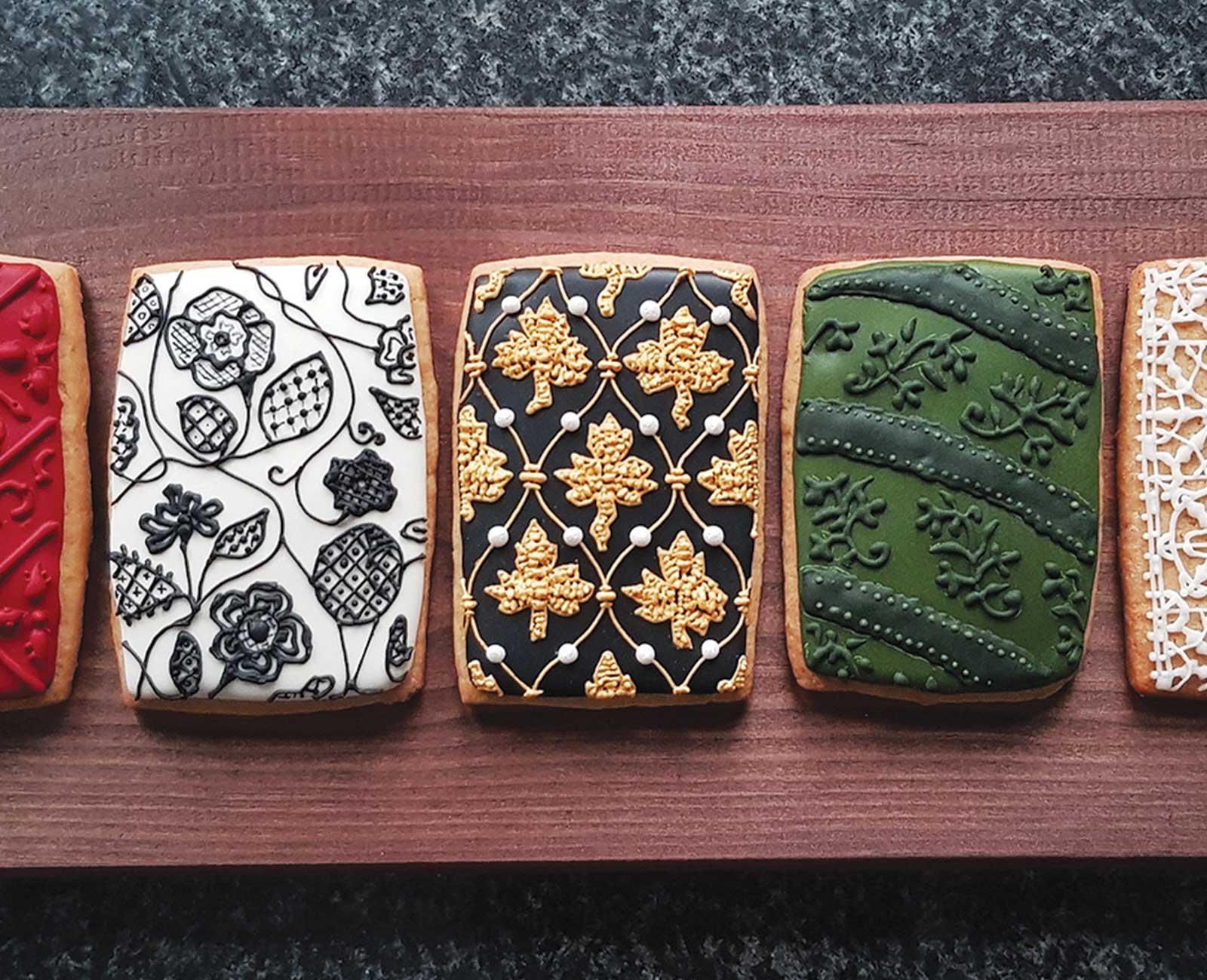 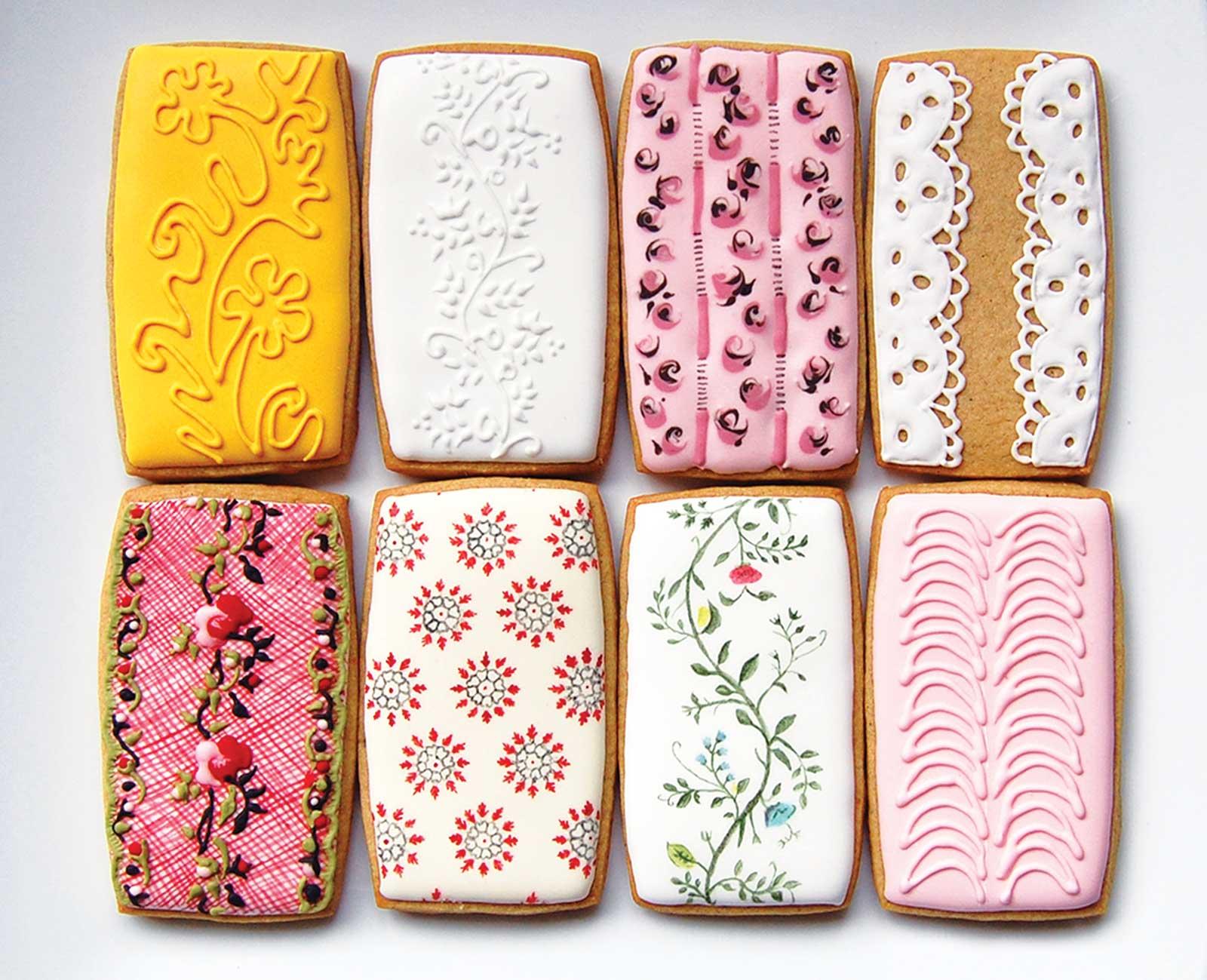 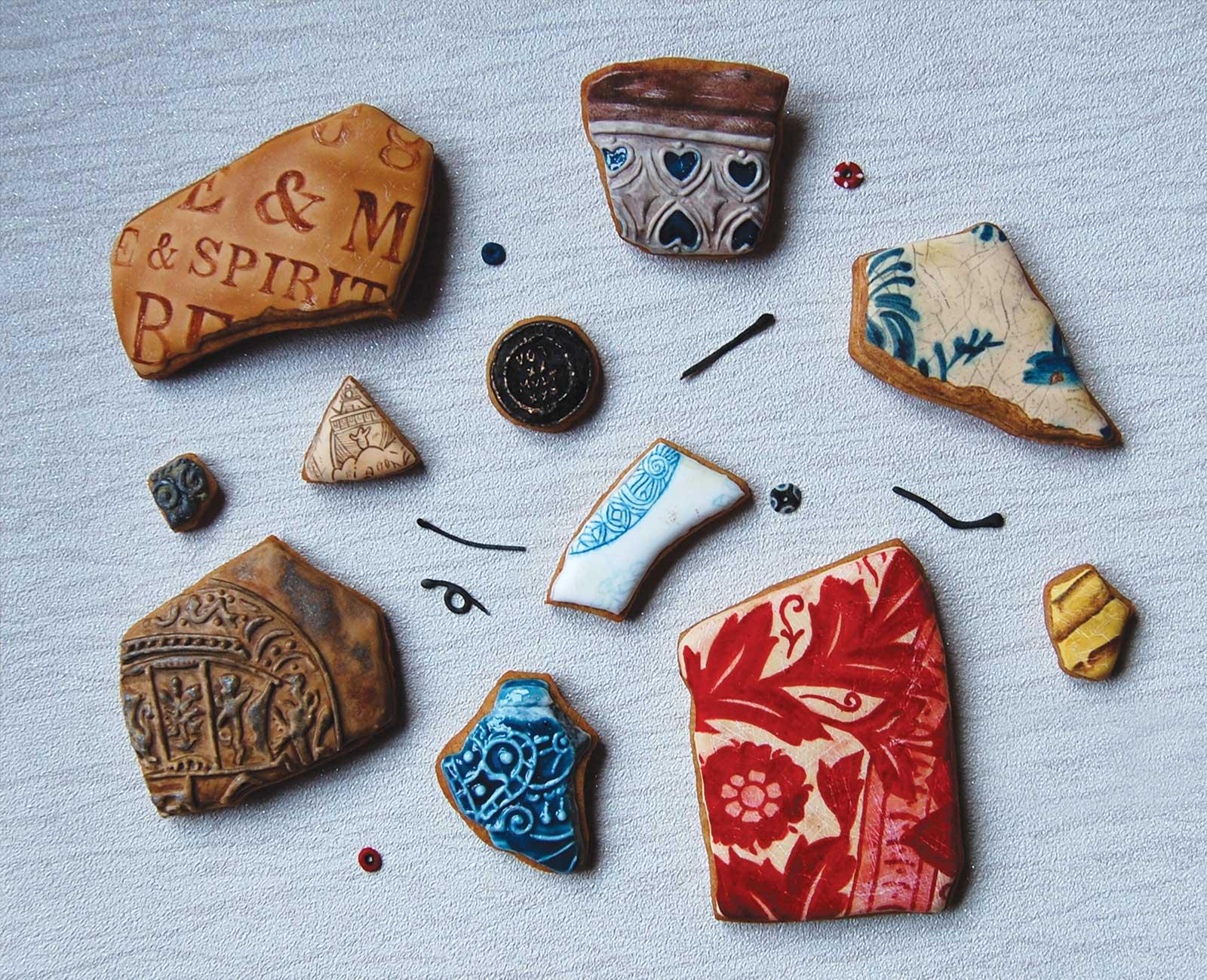 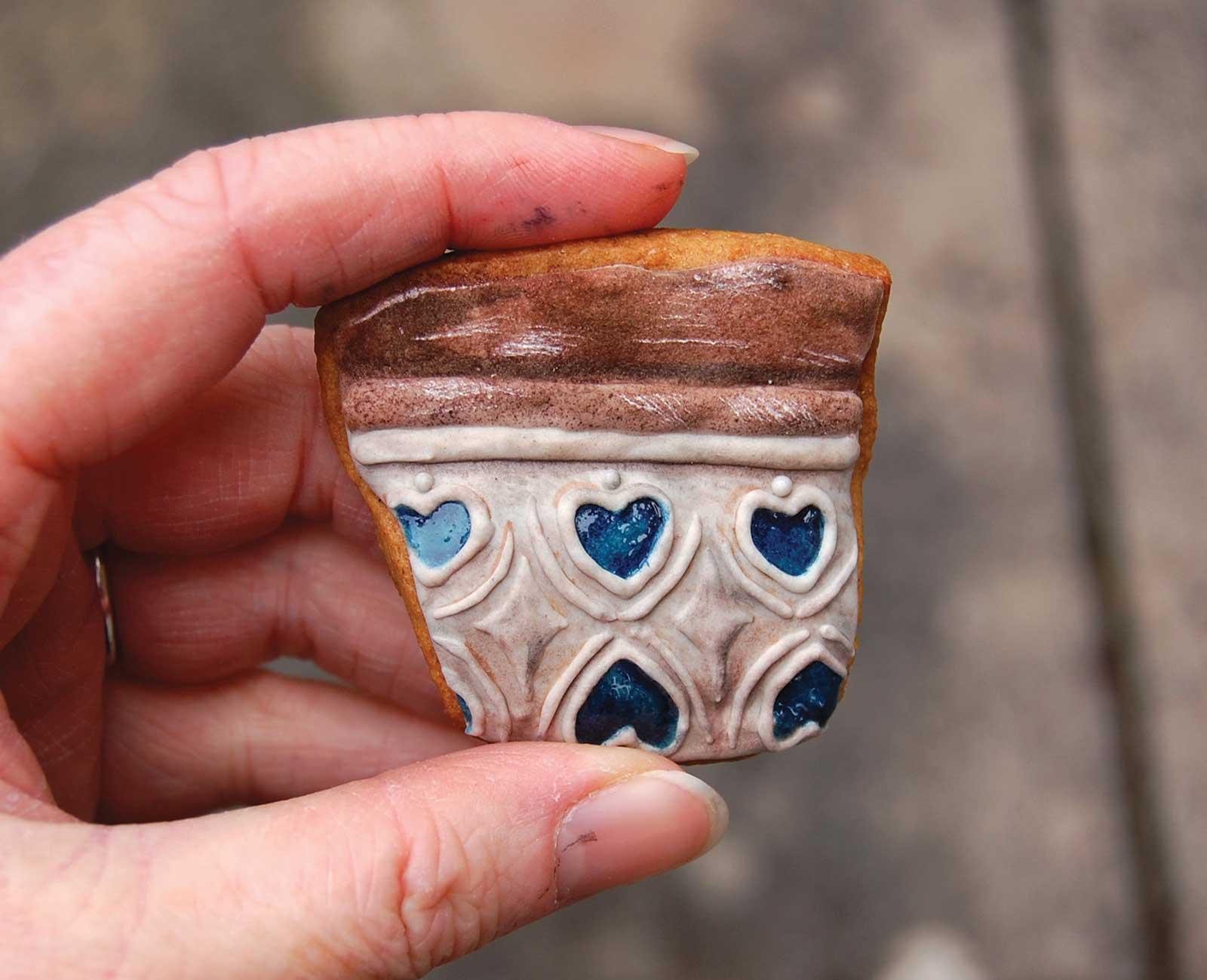 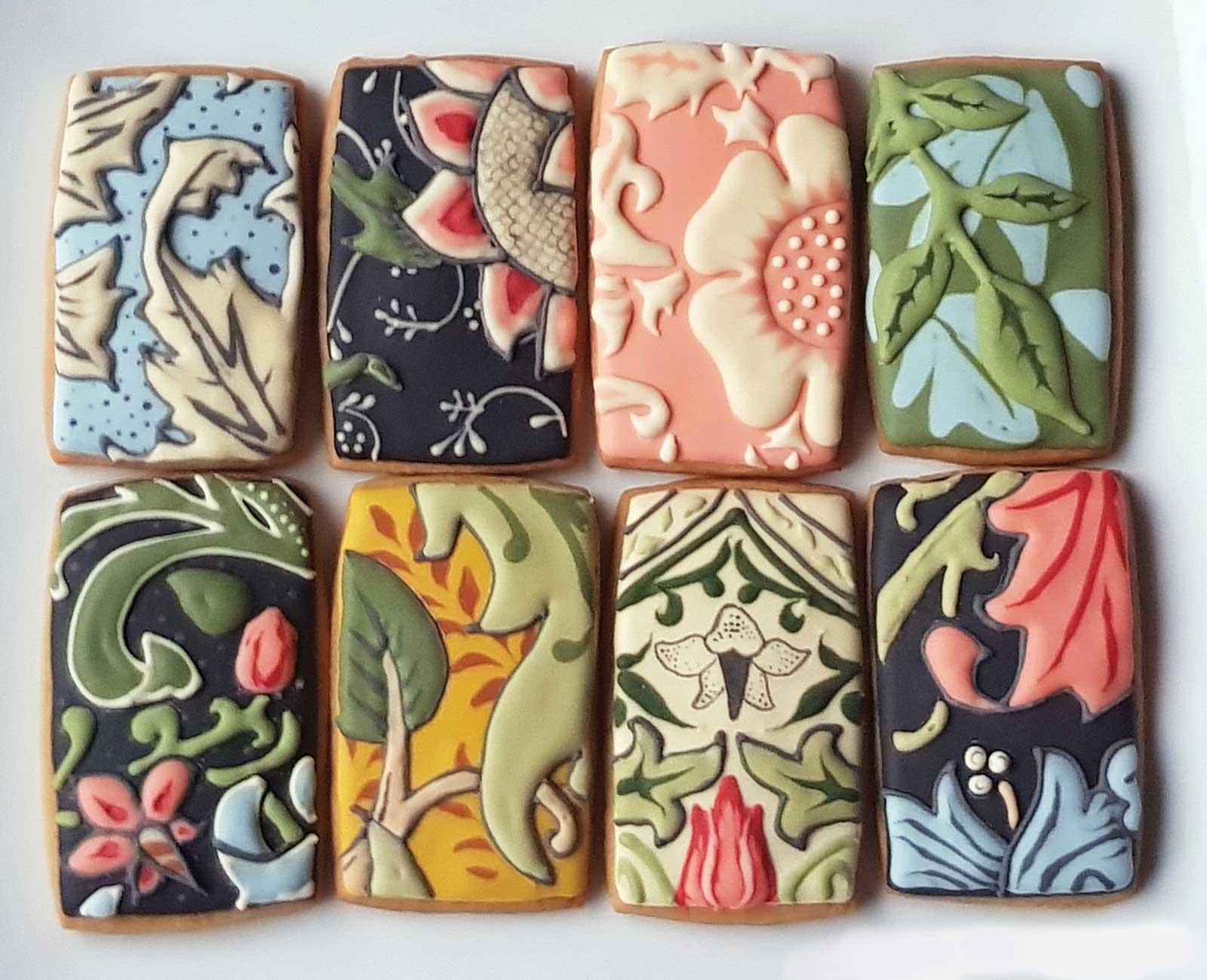 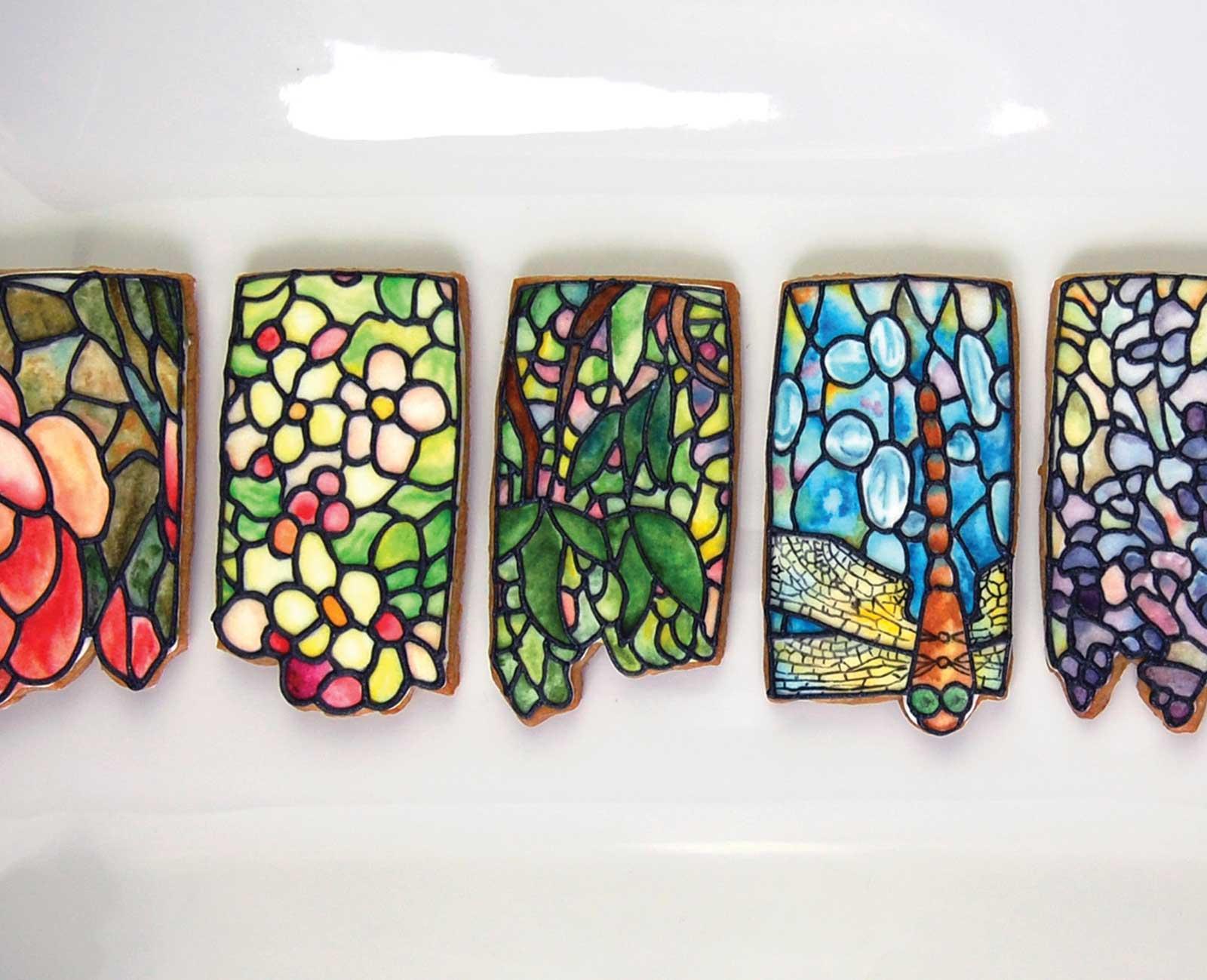 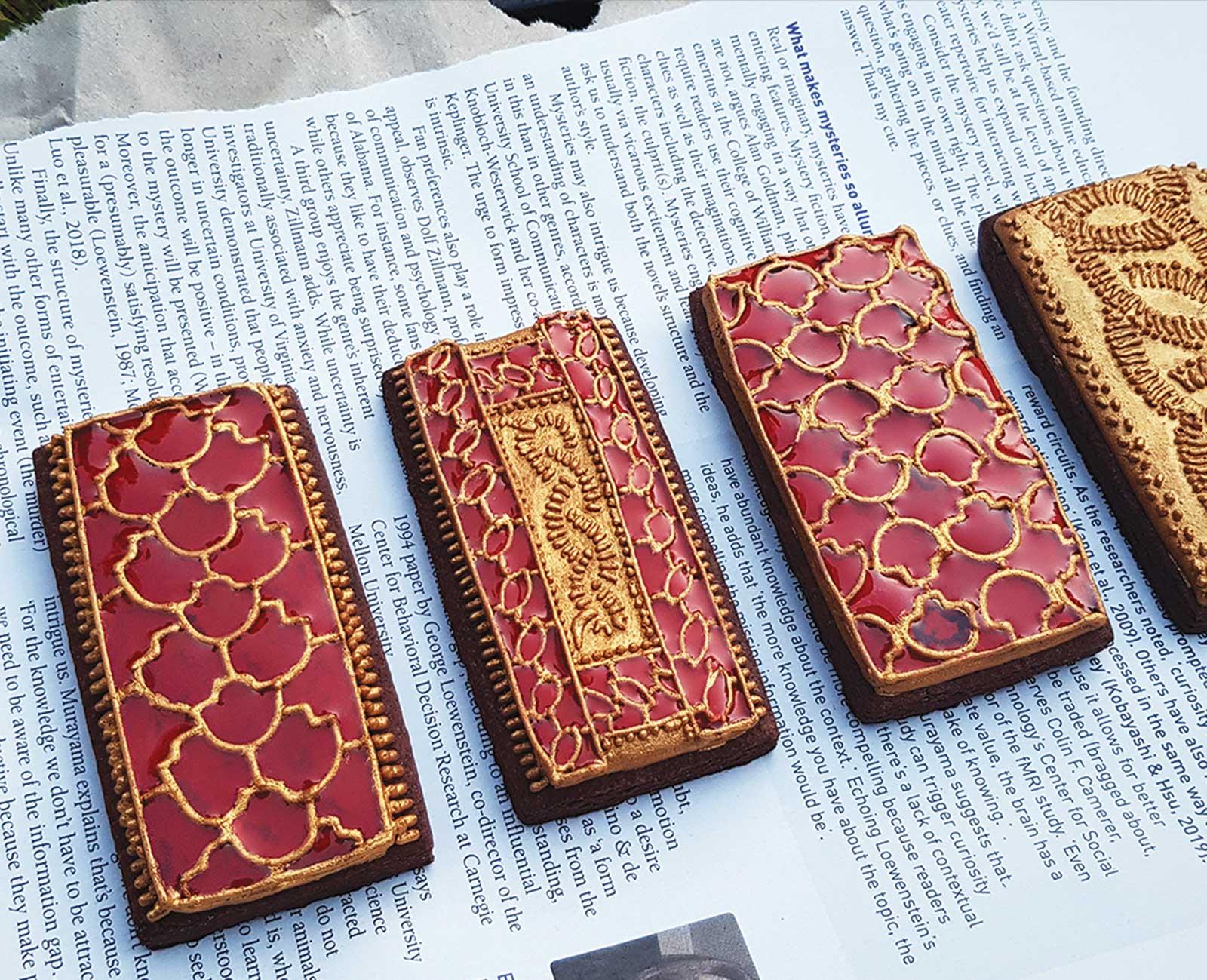 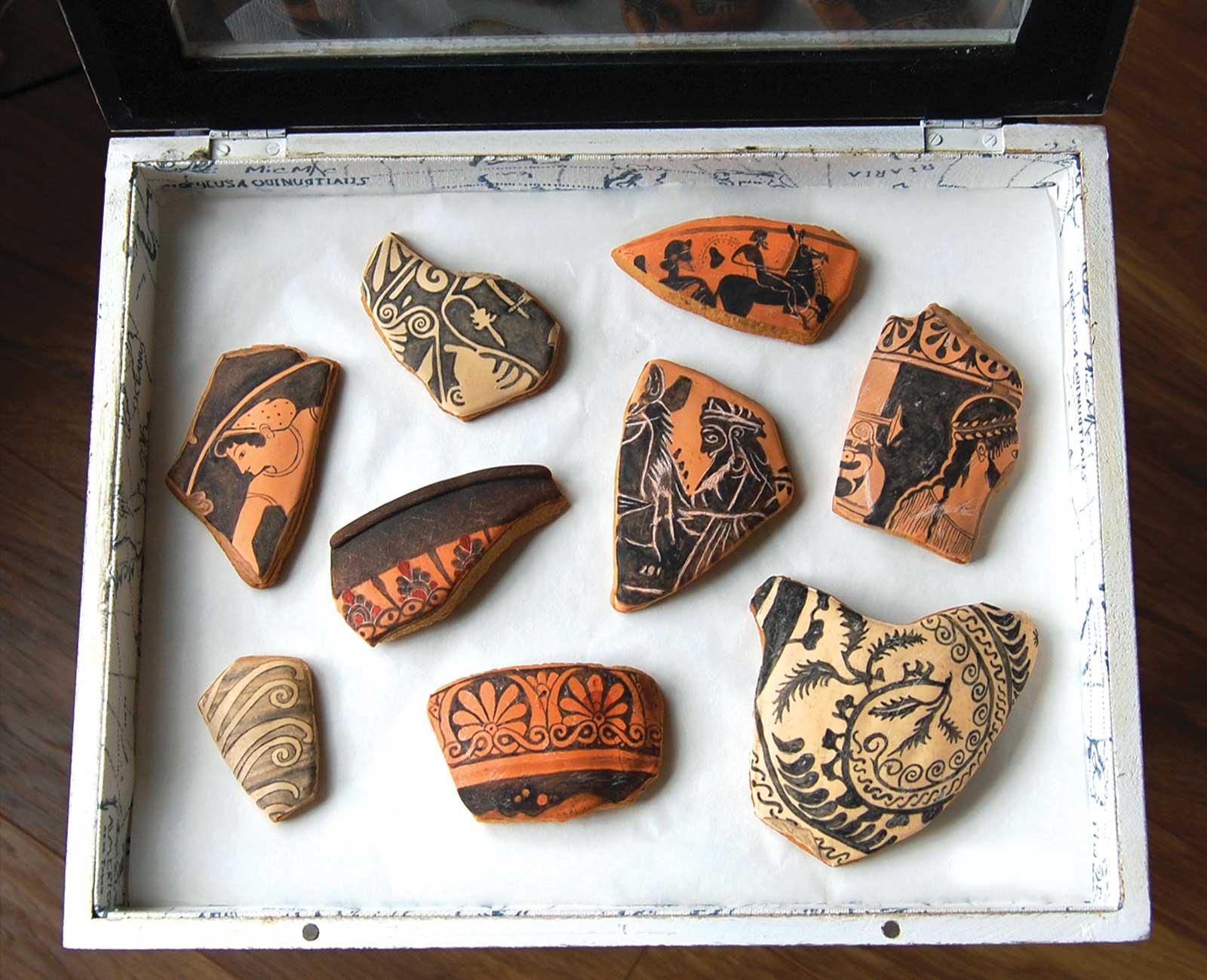 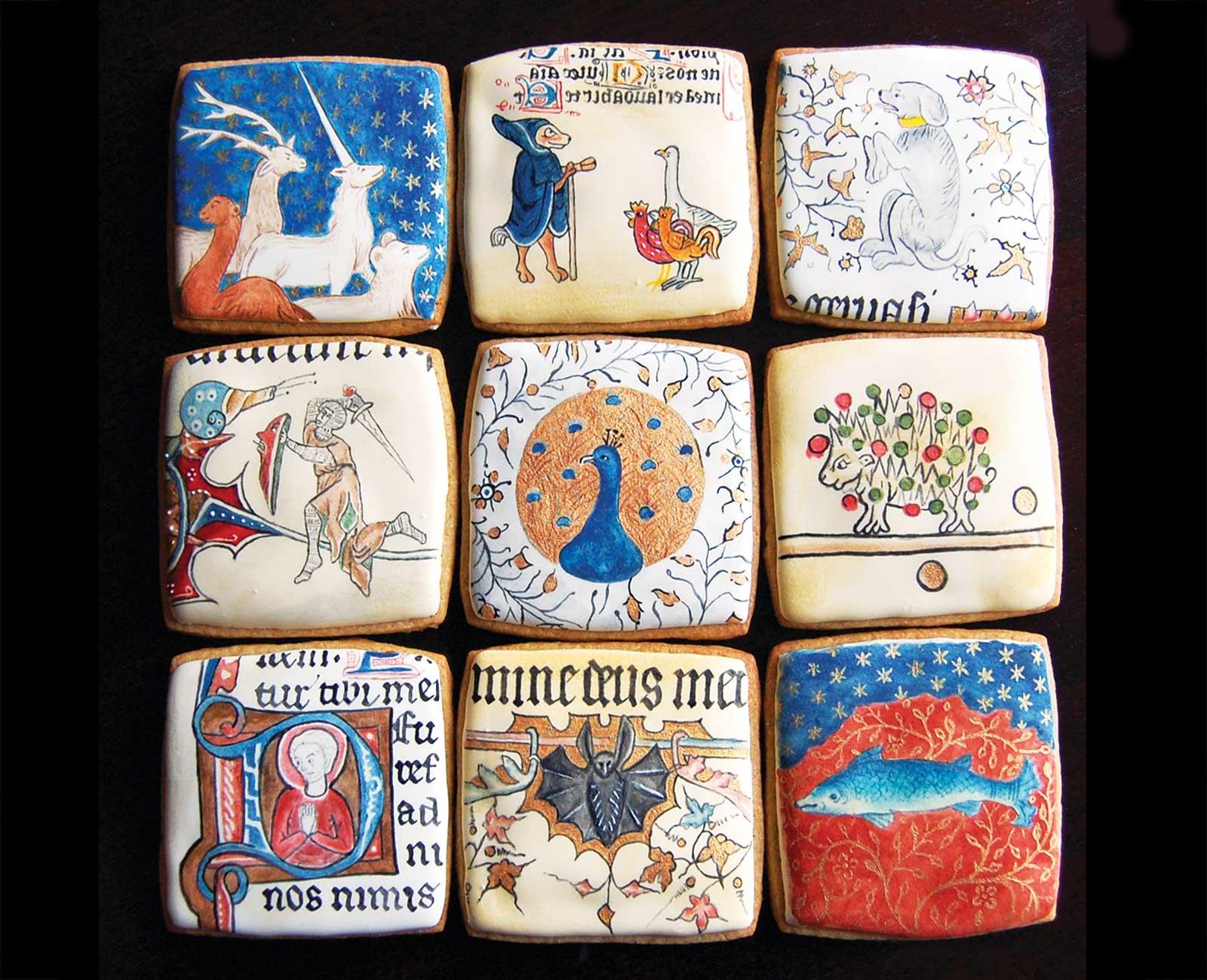 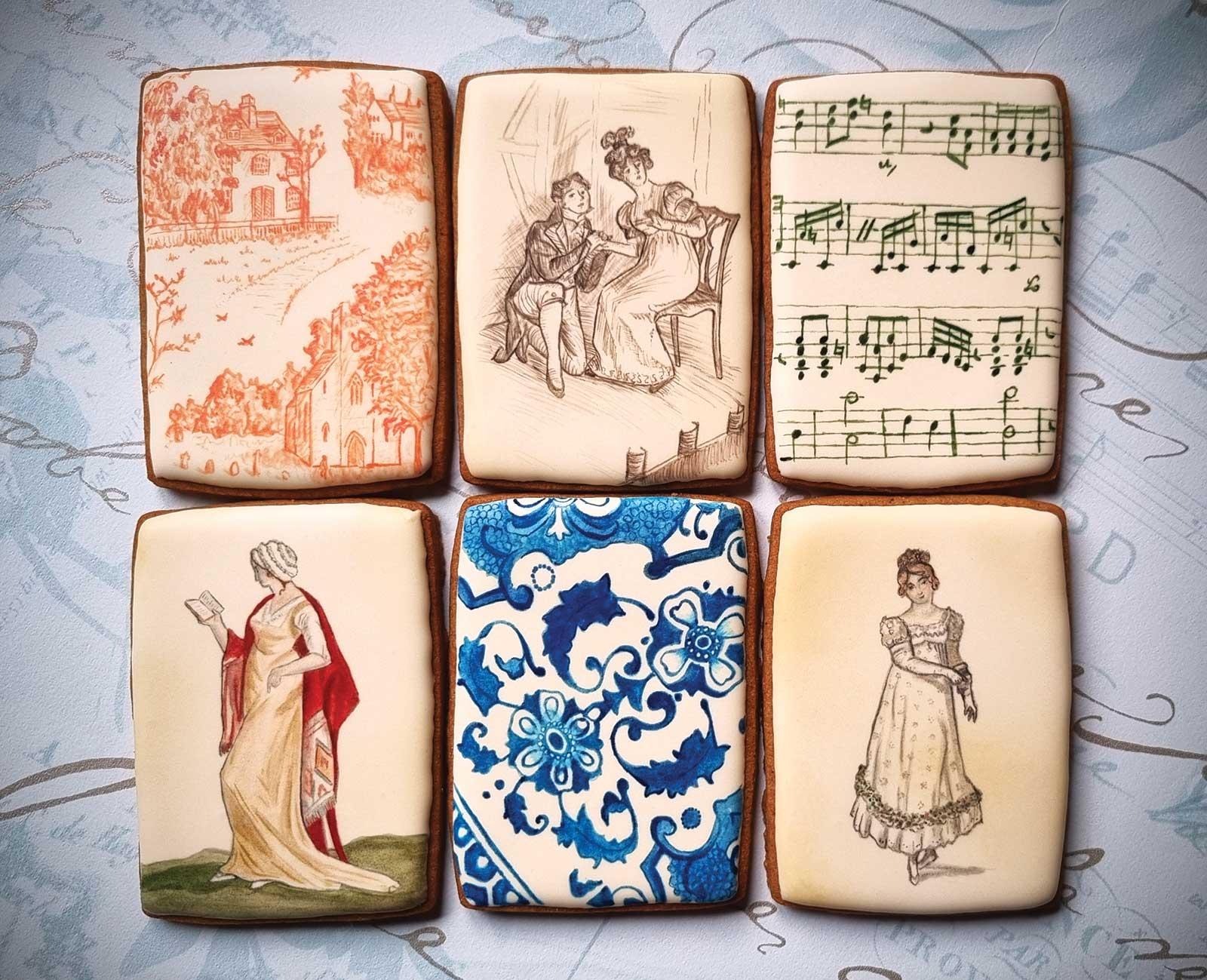 Her edible creations depicting illuminated manuscripts rival the real thing and have been widely shared online. “Recreating rare manuscripts and early printed books allows me to explore elements of calligraphy, annotation, gilding, and illustration. Once I have an idea for a set in mind, I’ll spend some time researching design options before beginning the baking and decorating process.”

Her archaeological designs are her favorites, recreating artifacts such as ancient Greek pottery shards, Anglo-Saxon metalwork, Roman coins, and Victorian transferware. She reproduces every scratch, crack, and wear mark in the royal icing so that the cookies look as though they have been in the ground for centuries. Each biscuit takes from one to three hours to complete.

“It’s a satisfying process, and at the end of each project I feel as though I’ve ‘met’ the original artifacts. I do match the flavors to the decoration if I can. So my ‘mudlarking’ cookies, inspired by objects found on the banks of the River Thames, were flavored with sea salt, and I used rose water for the Jane Austen biscuits to make them taste like recipes the author would have been familiar with.”

Her next project is to make a biscuit set inspired by her forthcoming 2022 book, Shakespeare in Elizabethan Costume: ‘Period Dress’ in Twenty-First-Century Performance, which examines how Elizabethan and Jacobean dress is recreated and reinvented in modern stagings of Shakespeare’s plays.

Hawkins said that creating biscuit art has changed the way she thinks about her academic work. “It’s expanded my research interests and has given me a way of connecting with people around the world. I will continue baking as a way of exploring material culture, celebrating museum and archival collections, and bringing the past to life.”

But what happens to the finished biscuits?

“They are photographed from every angle, then eaten! I don’t sell my biscuits, partly because they take such a long time to decorate. I send the finished biscuits to friends, family, and colleagues.”