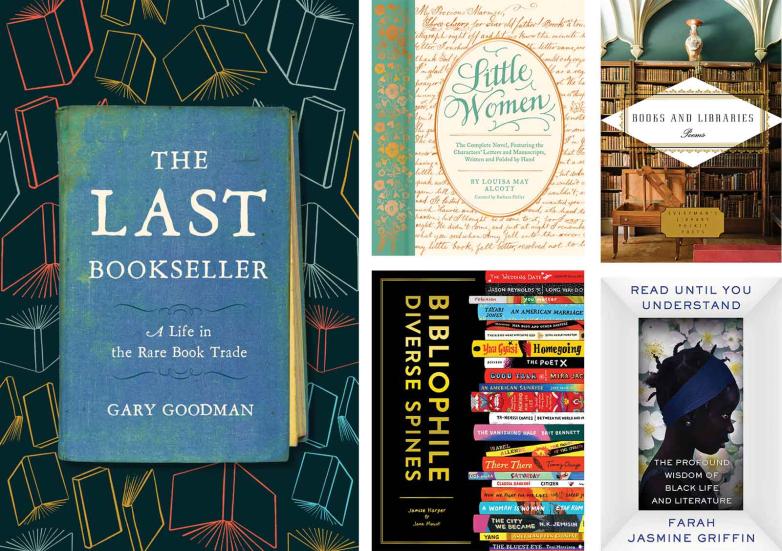 Gary Goodman, author of The Last Bookseller: A Life in the Rare Book Trade (University of Minnesota Press, $19.95), defines himself as “one of the last of a certain kind of bookseller. The kind that for six hundred years rooted around in basements, book bins, and bookstores looking for, sometimes, rare books or, more often, secondhand books.” Goodman got started in the business, somewhat accidentally, in 1982, and the learning curve was steep. His wry and relatable chronicle of the trials and tribulations of an antiquarian bookseller in the Midwest as he builds an empire—or close enough, North American’s first book town—in Stillwater, Minnesota, is a worthy addition to the genre of “Golden Age” booksellers’ memoirs. The anti-internet dogma in the book’s latter half may rub some the wrong way, but the many wonderful anecdotes of books scouted and sold will appeal to a great many book collectors.

Bibliophile: Diverse Spines (Chronicle Books, $18.95) was written by Jane Mount and Jamise Harper with a specific goal in mind: “for you to find at least ten new-to-you and irresistible diverse books by authors of backgrounds different from your town.” This objective—which I took seriously, marking up the book with sticky notes—works for both readers and collectors, making it an indispensable guide for expanding lists of what we read and what we collect. This might be why the “Editions” pages, in which every edition of a particular title, e.g., Zora Neale Hurston’s Their Eyes Were Watching God, is pictured and commented upon, are my favorites. The authors feature BIPOC books, bookstores, authors, and illustrators in a beautifully designed volume that takes a page from Mount’s previous book, Bibliophile: An Illustrated Miscellany. The result is nothing short of spectacular.

Barbara Heller’s edition of Pride and Prejudice appeared in last year’s roundup of holiday gift books, and this year she’s back with Little Women (Chronicle Books, $40). Meant to create an “immersive” reading experience, these editions contain pockets throughout the text which hold replicas of letters and paper ephemera that the reader can unfold and handle, experiencing the story from a few angle. Heller, a filmmaker and set decorator, hits all the right targets—vintage, literary, nostalgic—with this series and stays classy. I wonder what she’s working on for next year…

Read Until You Understand: The Profound Wisdom of Black Life and Literature (Norton, $26.95) came to my attention when I asked the author, Columbia University Professor Farah Jasmine Griffin to write an article about the Black Literature Matters exhibition she curated (her article is forthcoming in our spring issue). The book's title is derived from the advice of Griffin’s father, who died when she was nine, but handed down a deep love for literature. Braiding memoir and history, Griffin’s enlightening book celebrates iconic Black writers and artists in such a way that will prompt readers “to discover or rediscover them, to ponder and treasure them anew,” declared the New York Times Book Review.

Books and Libraries: Poems (Everyman’s Library, $15.95) is a handsome and heartfelt anthology of poems for book lovers. I interviewed the editor, Andrew Scrimgeour, last week about his selection and his inspiration.

Two bonus books I’d like to mention: With All Faults: Essays About Old Books (Waltham Street Press, $35) by collector David Meyer is a charming collection of essays that originally appeared in the Caxtonian, a journal of the Caxton Club in Chicago. In one piece, Meyer surveys examples from his library that, while faulty, are no less deserving of love, and in another, he describes books inherited from his grandfather and father. Dear Howard (Redstone Press) is a re-titled reprint of an enjoyable memoir by UK bookseller David Batterham originally published (and reviewed here) as Among Booksellers. Batterham sells copies via AbeBooks.