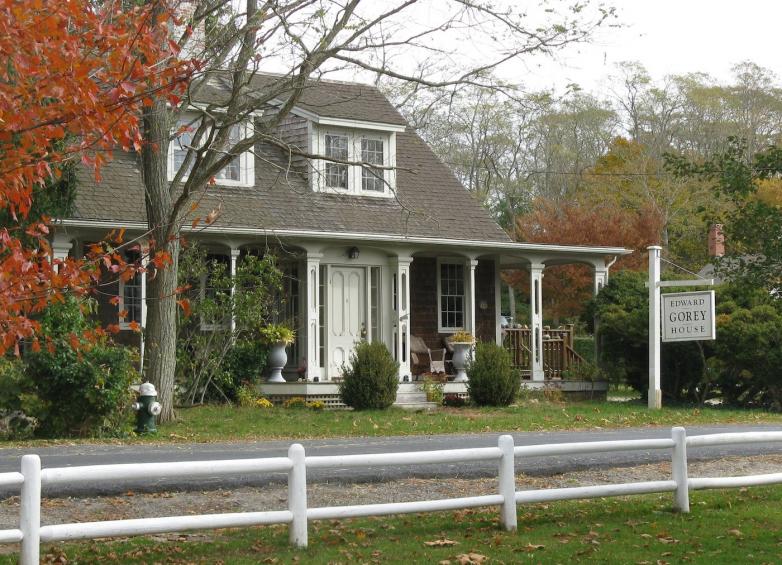 Summer is on the wane, but perhaps some of you out there are still planning a trip away. If you're heading to Cape Cod, gather some extra KN95s and hand sanitizer and add the Edward Gorey House at 8 Strawberry Lane in Yarmouth Port to your itinerary. A museum since Gorey's death in 2000, the house preserves the life and legacy of the prolific author, illustrator, playwright, and set designer.

The 2021 exhibit, on view through December, is Hapless Children: Drawings from Mr. Gorey's Neighborhood. The show features images of children assembled from the 116 books and various illustrations completed by Gorey from 1953 until his death. Anyone familiar with Gorey's aesthetic will know that children don't often fare well in his books--the youngsters in Gorey's neighborhood are endowed with absent and disinterested parents, while doting mothers and fathers are often quickly eradicated. As for the children in question, most don't live very long: drownings, vanishings, "axes from heaven" are all standard fare here. Yes in Gorey's world, childhood is brutal and unpredictable and there are no guaranteed happily ever afters. And though Gorey wrote his books for children, many of his works were never marketed to children. Innocent childhood is not a Gorey theme; rather, he explores the deeper, more complex issues of childhood (and, indirectly, the saccharine puffery that passes for children's literature). Though his illustrations are often hysterical, they do not shy away from the notion that the world is a dangerous place. Gorey softens the message by sharing it through the voice of another child.

Parents concerned about such content needn't fret--the "Hapless Children" of Mr. Gorey's neighborhood will delight nearly anyone ages 7 and up.