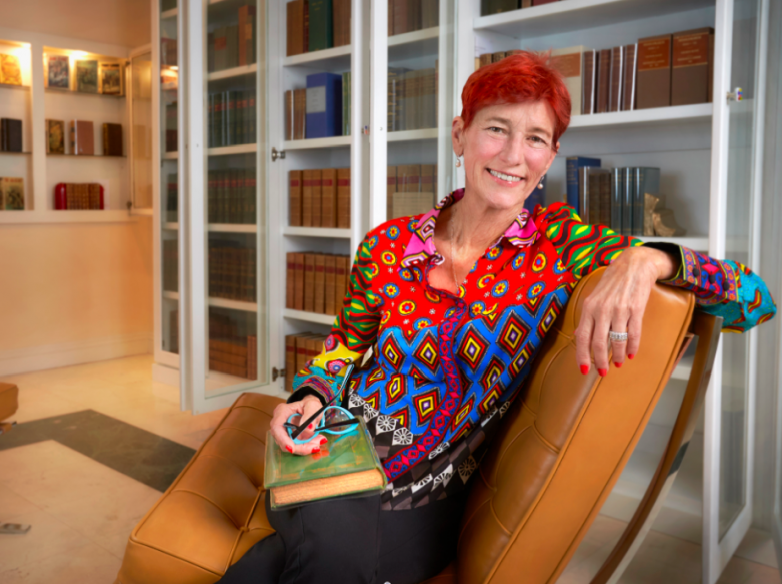 Beverly Rogers with part of her collection.

Las Vegas is home to more than glitzy casinos and pawn shops: the city can now claim a robust special collections program at nearby University of Nevada Las Vegas (UNLV), thanks in part to a $5-million endowment recently established by alumna Beverly Rogers.

The endowment will fund the Beverly Rogers Rare Books Curator position. This is the first named position at the university library.

“I am thrilled to establish this endowment for the UNLV Libraries because UNLV is my school,” said Rogers in a press statement. “I have a relationship with people in several departments and am excited about what this collection could mean for students, faculty, and the university.”

A self-professed bibliophile, Rogers credits Used and Rare by Lawrence and Nancy Goldstone as nurturing her love of collecting. Since the 1990s, Rogers has amassed an archive of approximately 1,300 items with a focus on Victorian novels and 19th-century forgeries, which includes a first edition of Jane Eyre and a first edition of John Donne’s Collected Poems with marginalia by George Eliot. Rogers is donating the trove to UNLV’s special collections as well, where it will be available for scholarly research.

Born in Pennsylvania, Rogers has called Las Vegas home since 1962. By working full-time, she put herself through college, earning a B.A. in history in 1977, followed by a career in sales for radio and television until marrying Intermountain West Communications owner Jim Rogers in 1997. After returning to UNLV to earn a master's in English in 2003, Rogers has devoted the past two decades to promoting literacy and education programs throughout Nevada. She is also involved with UNLV’s Black Mountain Institute, a writing and literacy center. On the heels of a $10-million donation, the Institute was renamed the Beverly Rogers, Carol C. Harter Black Mountain Institute six years ago.

“This unique collection of Victorian literature, forgeries, railway editions, catalogs, serial magazines, and first editions is unrivaled in the Southwest,” said University Library dean Maggie Farrell. “We are honored that Bev has chosen to establish this endowment for UNLV and entrust her collection to our Special Collections and Archives.”

UNLV will celebrate the donation and endowment with a lecture and exhibition highlighting some of the collection on October 3, when Rogers will also discuss her archive and evolution as a collector.