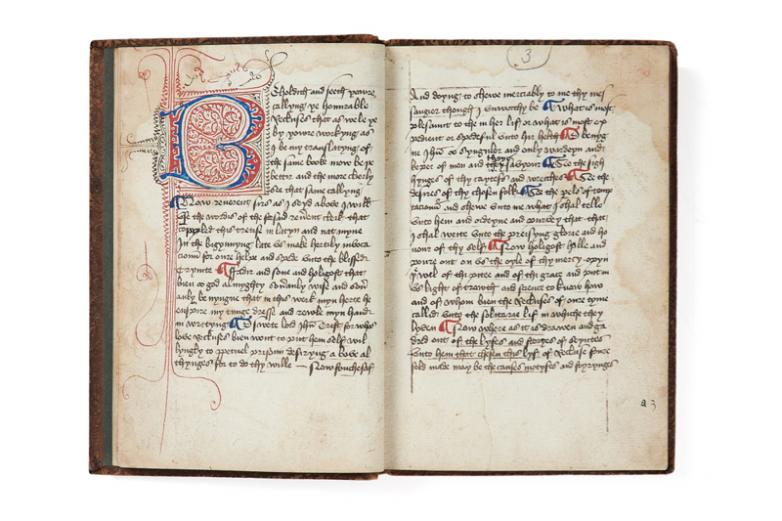 Courtesty of the UK Department of Digital, Culture, Media & Sport

Last week, UK Arts Minister Helen Whately announced a temporary export ban on “The Myrowr of Recluses,” an illuminated Middle English manuscript meant to guide those who were retreating from society and devoting their lives to prayer, often referred to as anchorites. The leather-bound manuscript, containing sixty-six leaves, details the reasons one might seek to become a religious recluse and what to expect from such a life. A translation of the “Speculum Inclusorum,” it was written by an unknown scribe in London in the early 1400s. The British Library owns the only other, though incomplete, version of “The Myrowr.”

“This beautiful decorated manuscript is a precious record of the life of hermits in 15th century England and it would be a sad loss if it was sold abroad,” commented Whately in a press release. “I hope that a buyer can be found to save this fascinating piece of history for future generations to study and learn from.”

The manuscript was sold to an overseas buyer in July of last year at Dreweatts/Bloomsbury Auctions in London for £135,000 ($176,250), thus prompting the export bar. In a bizarre twist, the consignor in that Bloomsbury sale was, according to the Guardian, Oxford don and MacArthur “genius” Dr. Dirk Obbink, who is currently under investigation for his alleged involvement in the theft of ancient papyrus fragments.

Obbink had purchased the manuscript at the Yates, Thompson and Bright: A Family of Bibliophiles sale at Christie’s in 2014 for the much higher price of £182,500 ($312,500). Jeremy Dibbell covered that sale—and even mentioned the sale of this particular book—in our fall 2014 issue. Like many of the books and manuscripts in that sale, this one has a compelling provenance, dating back to the sixteenth century. It also has unique elements, not yet studied by scholars.

Leslie Webster, a member of the reviewing committee for the UK’s department for digital, culture, media & sport, which administers export bans, said the text was “almost certainly written for female anchorites” and as such “offers a rich new avenue of exploration into the nature of women’s religious education in the early fifteenth century.”