Handwritten letters, speeches, photographs and scrapbooks, created by American suffragists who persisted for more than 70 years to win voting rights for women, will be featured in a new exhibition at the Library of Congress. “Shall Not Be Denied: Women Fight for the Vote,” opening June 4, will tell the story of the largest reform movement in American history with documents and artifacts from the women who changed political history 100 years ago. 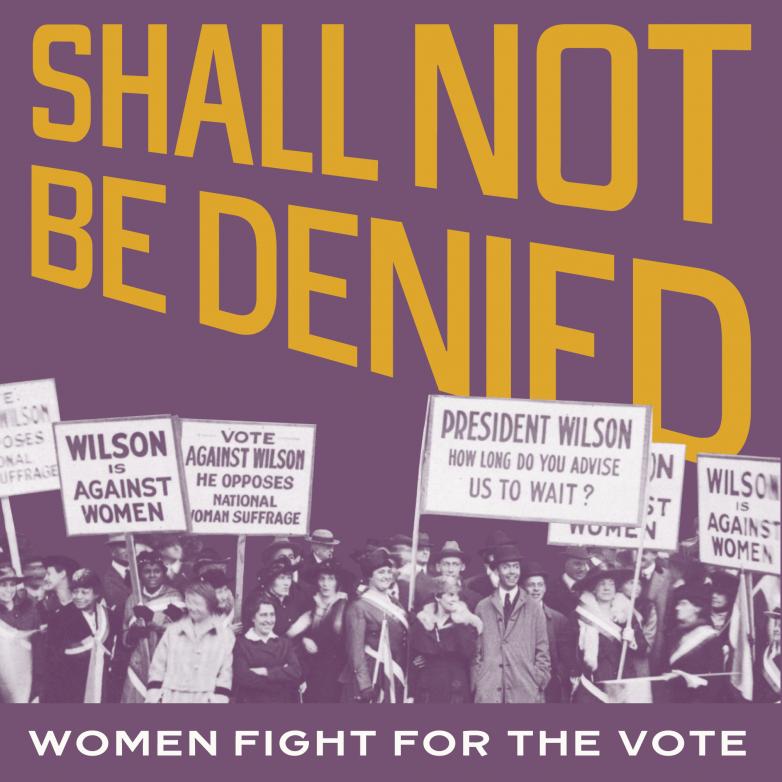 The new exhibition "Shall Not Be Denied: Women Fight for the Vote" opens June 4 at the Library of Congress and will be on view through September 2020.

Drawing from the personal collections of Susan B. Anthony, Elizabeth Cady Stanton, Lucy Stone, Mary Church Terrell, Carrie Chapman Catt, Harriet Stanton Blatch and others, along with the records of the National American Woman Suffrage Association and National Woman’s Party – all donated to the national library years ago – the exhibition will explore women’s long struggle for equality. “Shall Not Be Denied” will trace the movement from before the first women’s rights convention at Seneca Falls, New York, in 1848, through the divergent political strategies and internal divisions the suffragists overcame, the parades and pickets they orchestrated for voting rights, and the legacy of the 19th Amendment that was finally ratified in 1920.

“As institutions in Washington and across the country mark the centennial of women’s suffrage, now is a great time to learn more about women’s history. At the Library of Congress, we are so thrilled to share this new exhibition at this moment of national reflection,” said Librarian of Congress Carla Hayden. “Through the personal collections of many extraordinary women who helped shape this country, you will get a more intimate view into the struggles, the rivalries and ultimately the triumphs of this 70-year movement.”

The exhibition is part of a yearlong initiative in 2019 inviting visitors to Explore America’s Changemakers. It will explore the stories of dozens of diverse women who shaped the suffrage movement and made history.
Highlights of the exhibition include marquee records, images, music, merchandise, cartoons and ephemera of the movement. Key items include:

•    Abigail Adams’s letter from 1799 refusing to consign women to an inferior status;
•    A rare printed version of the “Declaration of Sentiments,” a listing of demands Elizabeth Cady Stanton read to more than 300 at Seneca Falls, and the proceedings of a larger national women’s rights meeting two years later in Worcester, Massachusetts, that drew more than 1,000 suffrage supporters;
•    A sculpture of Susan B. Anthony (portrait bust) that she hoped would one day be displayed in the Library of Congress, now on loan for the first time from the Belmont-Paul Women’s Equality National Monument;
•    An original broadside of the Declaration of Rights for Women that suffragists distributed in Philadelphia in 1876, disrupting the nation’s centennial celebration when Anthony presented the declaration on stage to acting Vice President Thomas Ferry;
•    A draft manuscript of Stanton’s controversial and best-selling “The Woman’s Bible” that paired Biblical text with feminist commentary;
•    Suffrage sheet music and merchandise used to “sell” the idea of suffrage;
•    Images and film footage of political activity on the streets, including the first national parade for suffrage in 1913 in Washington, D.C., which exposed racial divides in the movement and was disrupted by an unruly mob;
•    Banners, pins and a cap and cape worn by suffragists during parades and demonstrations;
•    Photographs of early picketing at the White House and documentation of suffragists’ subsequent arrests, imprisonment and force feeding;
•    Carrie Chapman Catt’s Ratification Notebook with notes on her strategy to win ratification of the 19th Amendment in each state; and
•    An interactive display on suffragists who helped win the vote state by state.

“Shall Not Be Denied” is part of the national commemoration of the 100th anniversary of women’s suffrage, marking major milestones in 2019 and 2020. The exhibition opens on the 100th anniversary of the U.S. Senate’s passage of the suffrage amendment that would become the 19th Amendment once it was ratified by three-quarters of the states on Aug. 26, 1920. The exhibition is on view through September 2020.
An online crowdsourcing campaign to transcribe documents within the Library’s unique suffrage-related collections to make them more searchable and accessible will be ongoing during the exhibition. For more information go to: crowd.loc.gov.

“Shall Not Be Denied: Women Fight for the Vote” is made possible by the Library of Congress James Madison Council, with additional support from 1st Financial Bank USA, Democracy Fund, Thomas V. Girardi, AARP, the Barbara Lee Family Foundation Fund at the Boston Foundation, HISTORY® and Roger and Julie Baskes.

The Library is inviting visitors to Explore America’s Changemakers through a series of exhibitions, events and programs. Exhibitions drawing from the Library’s collections will also explore Rosa Parks’ groundbreaking role in civil rights history and artists’ responses to major issues of the day. Other events throughout 2019 will explore changemakers through music, performances and public programs.