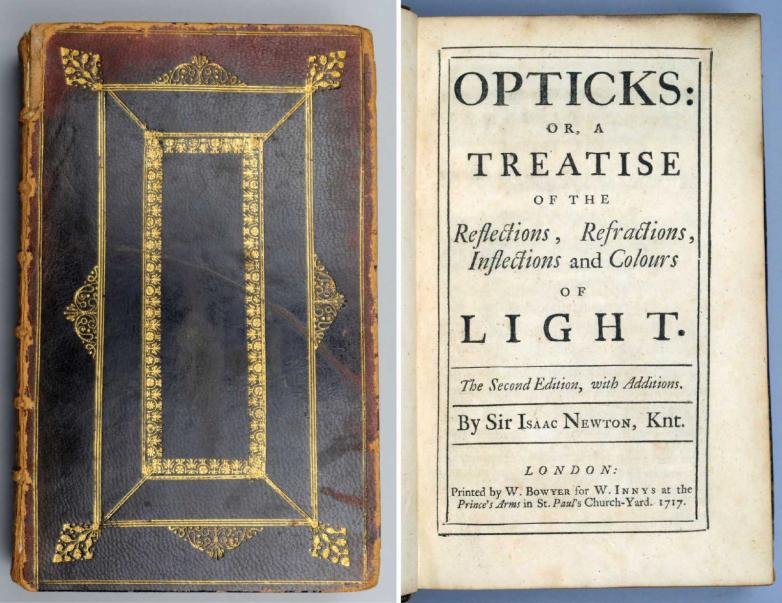 Last spring, Fine Books & Collections broke the news that Colorado book collector David L. DiLaura had discovered, in his own home library, a second edition (1717) of Sir Isaac Newton’s Opticks that had once been owned by Newton himself. The rare book’s remarkable provenance had escaped notice for decades because one bookplate had been entirely obscured by another. DiLaura, professor emeritus of civil and architectural engineering at the University of Colorado at Boulder, had been in the process of cataloguing his collection of 774 books when a strong light revealed the hidden bookplate.

“I’ve never been so taken aback by anything in my life,” he told us at the time.

Offered for sale last week at £375,000 ($460,000) by London booksellers Peter Harrington, the volume was purchased within days. Bound in morocco, with gilt edges and tooling, the ornate volume is thought to have been a presentation copy that Newton had not yet given away before he died. After his death, the famous scientist’s library was dispersed at auction. Books he owned turn up “fairly regularly” at auction, but copies of his own books do not — most reside in institutional libraries.

“It’s becoming increasingly rare for an author’s own copy of a book of this magnitude to fly under the radar for so many years. When DiLaura bought this copy more than 20 years ago from an English rare book dealer in West Sussex, neither buyer nor seller had any idea of its history. DiLaura has described his discovery as ‘a once-in-a-collector’s-lifetime event’ and it really is. Collectors and rare book dealers love a good tale of rediscovery, especially one which came to light – quite literally in this case – in the way this one did,” said Pom Harrington.

It had been DiLaura’s intention to sell his collection once he completed his bibliography, Bibliotheca Opticoria 1475–1925: A Library of the History of Our Understanding of Light and Vision, he wrote in an email last week. “I had long ago decided that I would sell my optics collection — turn the books back out into the collecting wild….This is my 77th lap around the sun and I have reached ‘Collecting's End.’”

Well, mostly. “After 30+ years or ardent collecting, to willingly bring the process to an abrupt end is not possible,” DiLaura added. “I still follow the auctions, review bookseller catalogues, scan websites, but purchasing has slowed to a near standstill.” To ease his melancholy, he has turned his attention to a project adjacent to collecting: building software for book collectors that envisions a “virtual, digital, standing-before-the-bookshelves” experience. (According to our reporting on software and apps for book collectors, such a product would be worthwhile. We’ll keep you posted.)