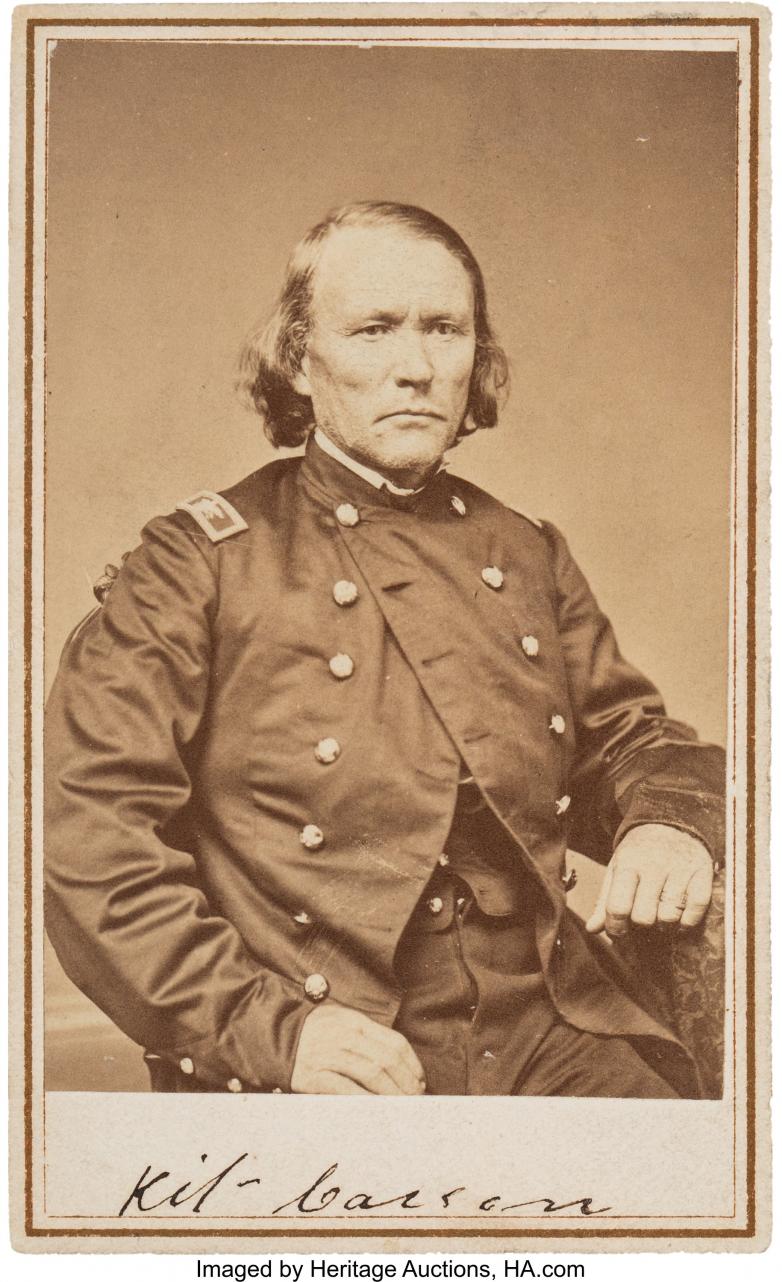 Among the top lots from the Formichi collection are:

A Christopher “Kit” Carson Carte de Visite Signed “Kit Carson” (estimate: $40,000+) features a three-quarters-seated portrait of Carson, dressed in his brigadier general uniform with his left arm resting on a table. That he signed his nickname on the mount below the albumen is unusual and significant, as the majority of Carson autographs are signed “C. Carson.” The use of his nickname, “Kit,” usually was reserved for items signed to Carson’s close friends, so to see it included on this carte de visite adds to the rarity. The lot is offered along with a signed letter of introduction from George H. Carson, the nephew of Kit Carson, and a copy of De Witt C. Peters’ The Life and Adventures of Kit Carson, The Nestor of the Rocky Mountains From Facts Narrated by Himself, which was published in New York by W.R.C. Clark & Meeker in 1858.

A John Wilkes Booth-Signed Copy of Rifles and Rifle Practice, by C.M. Wilcox (estimate: $30,000+) is a 276-page first edition with five fold-out diagrams, as well as numerous illustrations and charts. Signed by Booth on the inside front cover, “John Wilkes Booth, May 10th 1861,” it was inscribed less than a month after the Confederate attack on Fort Sumter, which could suggest that Booth bought the book as a direct result of the beginning of the Civil War. Booth did not fight in the war, but was a loyal devotee of the Confederate cause and hoped to find a way to assist the Confederate cause. Booth made no secret of his displeasure over the South losing the Civil War and Lincoln’s plan to free slaves, a stance that played out in his assassination of the 16th president.

A George A. Custer Carte de Visite Signed (estimate: $12,000+) features a vignette portrait of the flamboyant general, wearing the wide-brimmed hat for which he is known. This card, which is signed “Yours truly G A Custer,” is captioned as being “Entered according to Act of Congress by M.B. Brady & Co. in the year 1865 in the Clerk’s Office of the District Court of the District of Columbia.” The image, labeled K-77V, was taken sometime around March 23, 1865, according to Custer in Photographs, before he reverted to the rank of captain.

A Millard Fillmore Signed Carte de Visite (estimate: $10,000+) includes an E. Anthony imprint on verso, a mark that declares the image was published from a photographic negative from Brady’s National Portrait Gallery. The 13th president of the United States is shown in a stand-up portrait, his hand resting on the back of a chair. Signed at the lower margin, “Millard Fillmore March 6, 1862” and on verso in ink, “W F Pollard 1862/B_5 No. 234.” Fillmore is notable for trying to reach a compromise on slavery, an effort that alienated him from both sides of the debate, and for a later effort to run for president on the “Know-Nothing Party” ticket.

[Hubbard Pryor.] Samuel Pryor: Pair of Cartes de Visite of a Black Union Soldier (estimate: $4,000+) both have A.S. Morse imprints on verso. The images show Pryor before and after his enlistment in Co. H of the 44th United States Colored Troops. On verso of the first image, which shows Pryor wearing rags and a slouch hat, is Negative No. 3801. On verso of the second image, which shows dressed in a Union uniform and standing at attention with a musket in his right hand, is Negative No. 3800. The images were taken by Department of the Cumberland photographer A.S. Morse, and records date the photos to 1864. National Parks Service records suggest the man in the pictures is Hubbard Pryor, although the inscription suggests he used a different name. Pryor enlisted in the Union’s black infantry regiment after escaping from his master in Tennessee. These pictures were sent to the war department in December 1864 as part of a report on the black regiment. The 44th USCT troops fought at the Battle of Dalton, where Pryor was captured by Confederates, an ordeal he survived.

A Confederate Richard C. Morgan Signed Carte de Visite (estimate: $3,000+) includes a John L. Gihon’s Philadelphia imprint on verso. A bust portrait of Morgan dressed in his uniform, Morgan inscribed on verso “Yr affect. Cousin R. C. Morgan Col C.S.A. Morgan's Div Cavy Ft Delaware May 16, 64.” Col. Morgan was the younger brother of Gen. John H. Morgan and served on the staffs of Gen. John Breckenridge and Gen. A.P. Hill. After he helped to lead Confederate forces into Ohio in July 1863, he and about 750 others were captured by the Union, which kept him imprisoned until August 1864; this photo was taken while he was held as a prisoner of war at Fort Delaware.