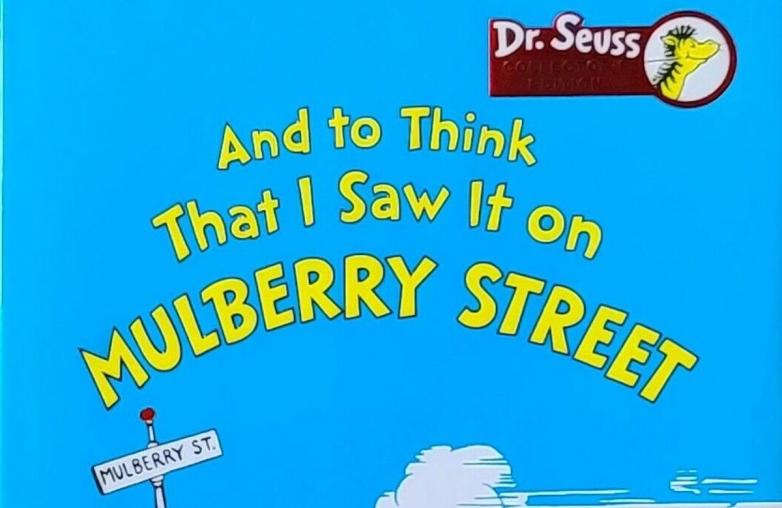 A fine copy in near fine dust jacket of the “Collector’s Edition” of And to Think That I Saw It on Mulberry Street, printed ca. 2000, is for sale for $1,500 from Sage Rare & Collectible Books via Biblio.

Unless you’ve been living with the Lorax, you’ve undoubtedly heard the news that six Dr. Seuss picture books have been pulled from shelves — not banned, but instead recalled by their owner, Dr. Seuss Enterprises. On March 2, the company released the following statement:

Today, on Dr. Seuss’s Birthday, Dr. Seuss Enterprises celebrates reading and also our mission of supporting all children and families with messages of hope, inspiration, inclusion, and friendship.

We are committed to action. To that end, Dr. Seuss Enterprises, working with a panel of experts, including educators, reviewed our catalog of titles and made the decision last year to cease publication and licensing of the following titles: And to Think That I Saw It on Mulberry Street, If I Ran the Zoo, McElligot’s Pool, On Beyond Zebra!, Scrambled Eggs Super!, and The Cat’s Quizzer. These books portray people in ways that are hurtful and wrong.

Ceasing sales of these books is only part of our commitment and our broader plan to ensure Dr. Seuss Enterprises’s catalog represents and supports all communities and families.

Some critics jumped on this decision, characterizing it as another instance of “cancel culture.” Others, however, view the move as a step toward eradicating racial stereotypes, particularly those present in children’s literature.

Still others saw an opportunity to buy or sell the controversial Seuss titles. Several titles soared up Amazon’s bestseller list. Secondhand booksellers, like Emily Hetzel of Common Crow Books in Pittsburgh, noticed “an enormous uptick in sales of those books on online sites. Cheap book club editions and modern reprints of the six titles, which ordinarily could be found in most used bookstores for $5-10 are now auctioning for $200-400.” She added, “We were slow off the mark and quickly sold what we had at pre-‘ban’ prices.”

At Biblio, a global marketplace for buying and selling used/rare books, Amber Shehan said “the buying panic tripled our site traffic on the first day of the news.” The increased traffic, she added, brought in a lot of buyers who were unfamiliar with used books—e.g., editions and condition terminology—and swamped their customer support with questions. “It's been a bit hairy around here!”

On March 5, eBay announced that it would remove the aforementioned titles from its site, but as late as yesterday, many listings remained live, with individual titles being offered from $20 to $200, and a set of five of the contested titles listed for $3,100.

That’s classic supply and demand, right? Except that hundreds of thousands if not millions of each of the six titles have been printed since their original publication dates (late 1930s-1976), so there is in fact a deep supply out there in the wild. (I, for one, own a circa 2005 copy of Mulberry Street, now stowed in some out-of-the-way closet to be unearthed in another decade or two and … reconsidered.) Which seems to indicate that the surge in commerce of nondescript and largely worthless reprints is about something else entirely.

As Dr. Philip Nel, distinguished professor of children’s literature at Kansas State University, said to Esquire about a copy of On Beyond Zebra being offered online for $1,500: “Unless that's a signed first edition, I wish them luck. There are so many of these books in print that the imagined scarcity the marketplace seems to be creating is truly imaginary. I imagine some opportunists will manage to make a buck off of this. But if you want a decent used copy of one of these books, they're not scarce.”