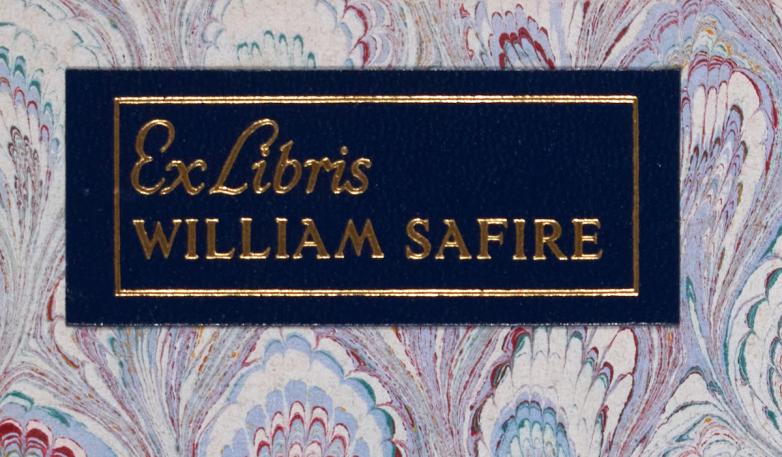 William Safire's book-label within his 1795 first edition of William Cobbett's A Bone to Gnaw, for the Democrats....

Books once owned by William Safire, presidential speechwriter under Nixon, Pulitzer Prize-winning journalist, and avowed grammar stickler, are heading to auction in New York later this month. This piqued my interest for two reasons: one, it complements the feature story I wrote for our current issue about Bryan A. Garner’s collection of dictionaries and grammars; and two, when I was an undergrad at Syracuse University, my very first assignment for the school’s daily newspaper was to cover a speech Safire was giving to the Newhouse School students. Safire spoke to us about the English mudslinger William Cobbett (1763-1835), whom he greatly admired. Garner also feels an affinity for Cobbett. During our interview last fall to discuss his new book, Taming the Tongue, Garner said of him, “No other grammarian is anything like him. Of all the people in the book, he would have been the most enjoyable to sit down and have a beer with.” 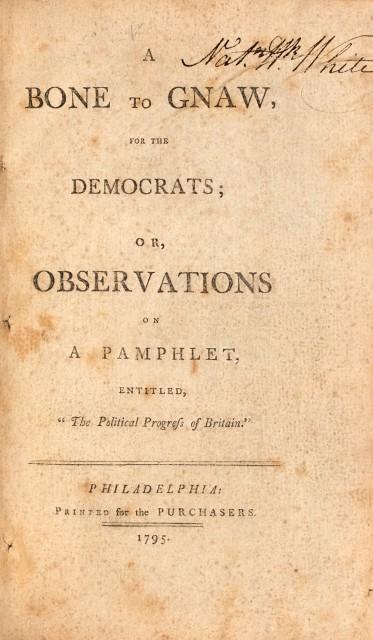 It is therefore extra exciting to see some Cobbett volumes among the offerings at Doyle, including a 1795 first edition of his A Bone to Gnaw, for the Democrats; or. Observations on a Pamphlet, entitled, "The Political Progress of Britain,” as well as a rare book by the vituperative journalist on the use of corn in papermaking.

Broadly, Safire’s interest in presidential history and his devotion to language shine through in the twenty lots that bear his provenance. In the former category: a 1777 Journals of Congress (incomplete), a Lincoln-signed commission from 1861, and a bound volume of Nixon and Kennedy campaign speeches, inscribed to Safire by Nixon. In the latter: a 1790 first edition of Noah Webster’s A Collection of Essays and Fugitiv Writings. On Moral, Historical, Political and Literary Subjects, a 1785 first edition of James Boswell’s The Journal of a Tour to the Hebrides, with Samuel Johnson, and a 1982 first printing of Safire’s own What’s the Good Word? bound in full black morocco with marbled endpapers.

Safire, who died in 2009, was known to be a bibliophile. Between 1994 and 1998, he donated books from his personal collection and selected personal papers to the Syracuse University Library, where he also provided the funding for the construction of the Safire Room, a quiet study room. In 2011, his estate added another 1,700 books to Syracuse’s collection, “some of them rare.”

“On weekends, Safire was known to spend time applying a proprietary salve to his leather-bound books,” according to Doyle. “As his collection expanded, he resorted to hiding later volumes of works behind earlier ones and covering more walls in more rooms with bookshelves.”