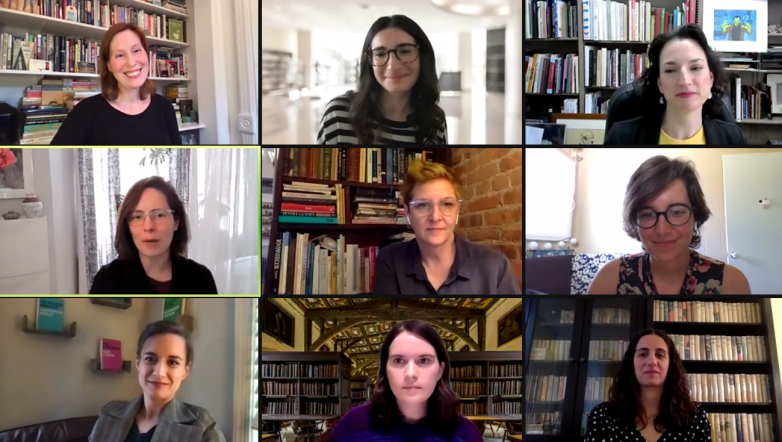 The panelists of Swann Galleries' webinar, Owning It: A Roundtable for Young Collectors, held on May 11, 2021.

Earlier this week, Alexandra Nelson, the chief marketing officer at Swann Galleries, hosted the latest edition of the Swann Salon Series, “Owning It: A Roundtable for Young Collectors.” Swann specialists Devon Eastland and Christine von der Linn, Heather O'Donnell of Honey & Wax Booksellers, and Rebecca Romney of Type Punch Matrix assembled for a virtual conversation featuring all the winners of the Honey & Wax Book Collecting Prize, which is awarded annually to a young woman with an outstanding collection of books. (This year’s deadline is June 1, so there’s still time to apply! Among other prizes, the winner receives a subscription to Fine Books.) In the words of von der Linn, what this prize and this discussion reinforces is that “the book as object, the book as art is still so important."

The previous Honey & Wax winners, who have all been featured by Fine Books over the years, include:

Jessica Kahan (2017), a public librarian, won for “Romance Novels of the Jazz Age and Depression Eras,” and was featured in our spring 2018 issue.

Jessica Jordan (2018), a doctoral candidate in English, won for “Collecting the Dillons: Six Decades of Unparalleled Illustration.” She also won the 2021 California Young Book Collectors Prize for a second collection on "Women in Subscription Bookselling" and is profiled here.

Emily Forster (2019), a cartoonist and illustrator, won for “Crimes of Passion: Collecting Fan-made Comics and Dōjinshi." Her Bright Young Collector profile is here.

Miriam Borden (2020), a doctoral candidate in Yiddish Studies, won for “Building a Nation of Little Readers: Twentieth-Century Yiddish Primers and Workbooks for Children.” Her Bright Young Collector profile is here.

About 120 guests attended the online event, according to Nelson. The title, “Owning It,” O’Donnell said, held two meanings: encouraging young collectors to be overt about their collections, and exploring the idea of ownership and how living with the material you collect can give you a different perspective.

The panelists talked about the importance of research and community. In all of the winners’ chosen fields of interest, no bibliography existed, which made it necessary to be creative in their approach and do the legwork to identify acquisitions. For Forster, who focuses on fan comics and Dōjinshi, this has meant digging into online fan culture and attending comic cons, as opposed to book fairs. Similarly, for Borden, the first step in building her collection of Yiddish educational books was to let that community know of her interest so that when, for example, a storage closet full of Yiddish books was discovered, she got a phone call.

Kahan and Jordan have both had to build their own checklists simply by learning more about their topic and then determining which publisher or series to look for next. “You have to have a capacious and roving eye,” said Jordan, who prefers scouring the library book sales and secondhand shops for examples of the often unsigned book covers and illustrations by Leo and Diane Dillon that she values.

Some might disparage them as “little” collections—since we’re not talking about incunabula or Shakespearean Folios—but, said O’Donnell, these collectors are doing the “really crucial cultural work” that will be meaningful to future scholars. These young collectors are blazing their own trails in book collecting, and that is something to be celebrated.