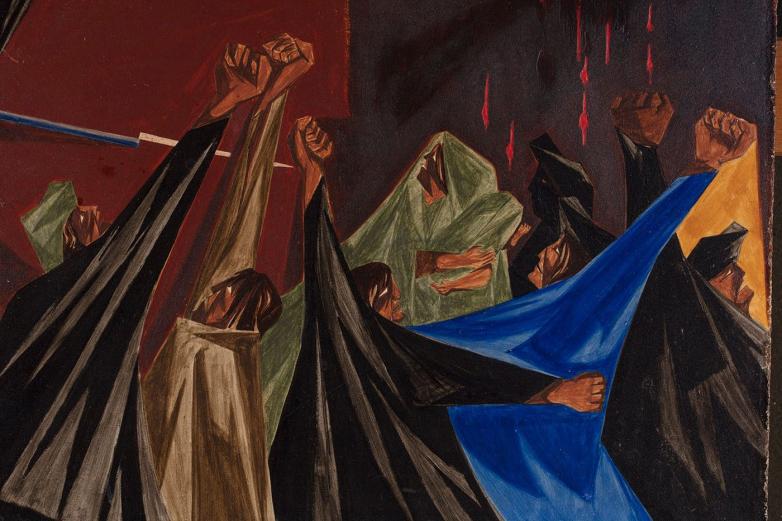 Jacob Lawrence, . . . is life so dear or peace so sweet as to be purchased at the price of chains and slavery?—Patrick Henry, 1775 , Panel 1, 1955, from Struggle: From the History of the American People, 1954–56, egg tempera on hardboard. Collection of Harvey and Harvey-Ann Ross.

Coming up this Independence Day weekend, the Crystal Bridges Museum of American Art in Bentonville, Arkansas, will open We the People: The Radical Notion of Democracy, which puts a rare, original print of the U.S. Constitution—there are just eleven known in the world—in conversation with works of art that provide diverse perspectives on the nation’s founding principles.

“Art has long been a powerful platform for uplifting the inherent ideals of the U.S. Constitution,” said Polly Nordstrand, Crystal Bridges’ curator of Native American art. “We hope visitors see how artists have creatively engaged in the dialogue to demonstrate our rights and the greater aspirations of our nation to seek equality and justice for all.”

Original prints of other founding documents, including the Declaration of Independence, the Articles of Confederation, and the proposed Bill of Rights, will also be displayed alongside works by influential historical and contemporary artists, such as John Lee Douglas Mathies’ depiction of Seneca leader Red Jacket and John Trumbull’s portrait of Alexander Hamilton, as well as twentieth- and twenty-first century works by Mark Bradford, Elizabeth Catlett, Jacob Lawrence, Shelley Niro, Roger Shimomura, and others exploring constitutional themes of equality, freedom, and justice.

The original print of the Constitution comes to Crystal Bridges following its purchase last year by Citadel founder and CEO Ken Griffin, who acquired the historic document for $43.2 million with the intention of making it accessible to the public. The sale caught the attention of Crystal Bridges Board Chair Olivia Walton, who suggested partnering with Griffin to bring the document to Crystal Bridges first, where it will be on display free of charge through January 2, 2023.