Rare Books on the Runway 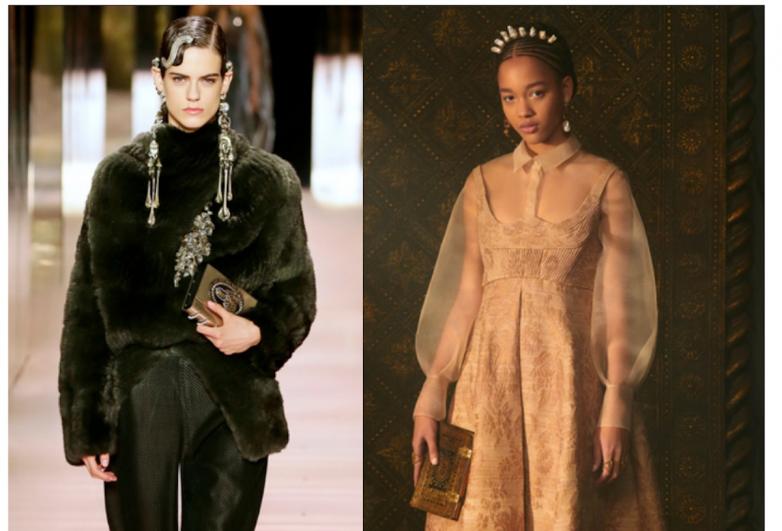 Some bookish looks from Paris Fashion Week this past January.

Do antiquarian books and haute couture go hand in hand? They do this year.

At the Fendi couture show in Paris last month, model Miriam Sanchez walked the runway with a 'blook' in hand. The blinged-out book-form accessory was perhaps a nod to what designer Kim Jones said was his inspiration for the show: the literary Bloomsbury Group. In fact, many of the prints used in the garments were said to have been influenced by the marbled covers of Hogarth Press books. Even more exciting for bibliophiles is the news that Sammy Jay of Peter Harrington Rare Books curated an exhibition of rare Bloomsbury volumes for Fendi’s Rome headquarters, which included first editions of T. S. Eliot and Virginia Woolf, whose Orlando was something of a guiding star for Jones.

“I wanted to look at different points of time in Fendi – which is why Orlando came into my head,” he told British Vogue. “I wanted to pull out points of reference from Karl [Lagerfeld, former Fendi womenswear creative director], but renew them. To look at them in a lighter way, to see them with a new eye, but without it appearing nostalgic.” Lagerfeld was quite the book collector, too.

A closer look at spring 2021 fashion, via Vogue, revealed more bookishness. Christian Dior presented an ‘Old Masters’ look, executed in gold tones and brocade, with pomanders, horses, and ewers setting the scene. Books with leather gilt bindings were carried (pictured above right) or piled on a nearby table or floor.

Shelves of old books as a backdrop also turned up in Casablanca’s 2021 ready-to-wear line, reminiscent of Chanel’s Fall 2019 library scenery.