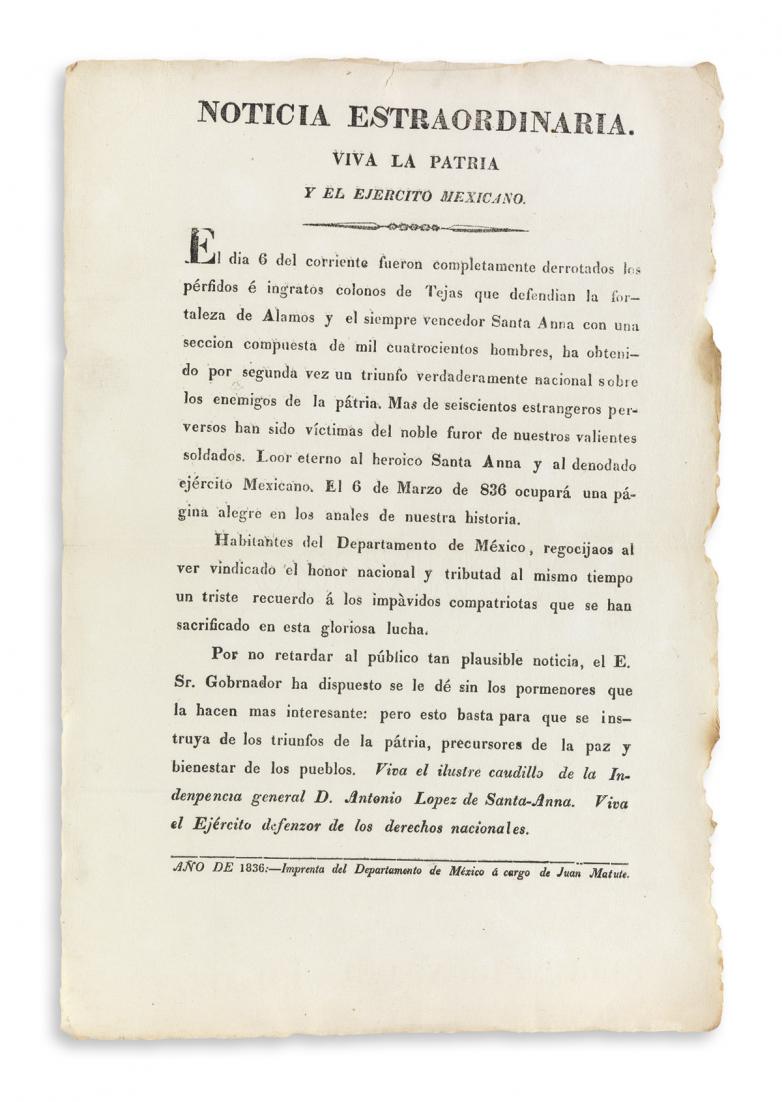 An 1836 broadside announcing the fall of the Alamo, printed at Mexico City and offered at Swann Galleries this week.

Another bunch of auctions this week to keep an eye on:

Also on Tuesday, Printed & Manuscript Americana at Swann Galleries, in 370. An early Bay Psalm Book editions printed in England and bound with a defective 1648 Cambridge Bible is estimated at $50,000–75,000. A first edition Book of Mormon could sell for $40,000–60,000, and the same estimate has been assigned to an 1836 broadside printed in Mexico City which announces the fall of the Alamo. A portfolio of illustrations by William Sydney Porter is also estimated at $30,000–40,000. The images were made to illustrate a memoir by miner Joseph T. Dixon, which the author ended up destroying before publication.

At Bonhams London on Wednesday, March 11, Fine Books, Atlases, Manuscripts & Historical Photographs, in 156 lots. The complete autograph manuscript of de Sade's novel Histoire secrète d'Isabelle de Bavière reine de France (1813) shares the top estimate of £70,000–90,000 with an inscribed copy of the first impression of Harry Potter and the Philosopher's Stone. Rowling inscribed this copy to Bryony Evens, the office manager who plucked the manuscript from the "slush pile" and urged the agency to represent Rowling. A volume from Walter Raleigh's copy of Tasso is also for sale, estimated at £30,000–50,000.

Rounding out the week, an online sale of the residual part of The Erwin Tomash Library on the History of Computing at Forum Auctions on Thursday, March 12 (the initial offering was covered at length in our winter 2019 issue). The 292 lots include a first edition (1484) of Pietro Borgo's Aritmetica mercantile, estimated at £15,000–20,000. A copy of the first illustrated Italian work on arithmetic, Calandri's Aritmetica, could sell for £12,000–18,000.