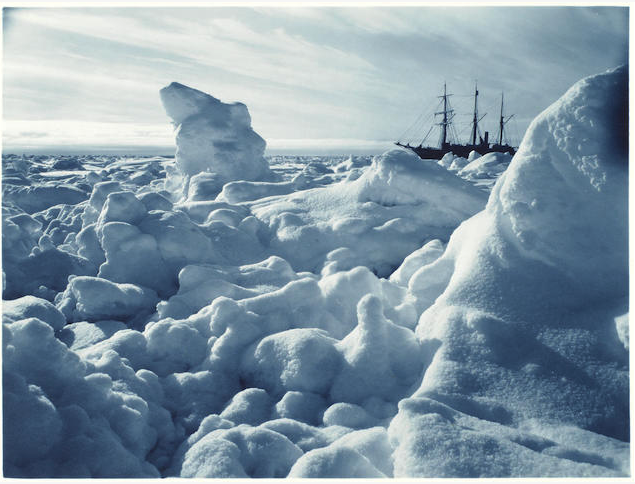 Photograph from a presentation album of images from the 1914–1916 Shackleton Expedition, offered at Bonhams this week.

A very busy week coming up in the auctions rooms:

On Tuesday, February 25, Swann Galleries sells Classic & Contemporary Photographs, in 334 lots. Two lots are estimated at $50,000–75,000: a 1940 print of Edward Steichen's White Lotus and Margaret Bourke White's The George Washington Bridge (1933). The latter has been in the family of the original recipient (Bourke-White's assistant Robert Edward Kiehl) since the mid-1930s. A presentation album containing more than 100 photos of Peruvian sites and people (1947) by Martin Chambi and M. Gonzalez Salazar is estimated at $30,000–45,000.

Also closing on Tuesday is an online sale at Doyle New York, A Collection of Edward Gorey, in 201 lots.

At University Archives on Thursday, a 287-lot sale of Autographs, Books & Relics Include Kerouac Estate & Hemingway. A typewriter used by Hemingway to write A Moveable Feast, loaned to Hemingway in 1959 by his friend and biographer A.E. Hotchner, is estimated at $50,000–100,000. Retained drafts of Samuel Colt's patent documents for "revolving cylinder guns" could sell for $30,000–45,000. Jack Kerouac's final typewriter, accompanied by a purchase receipt, is estimated at $12,000–18,000. A rare letter written by Zachary Taylor as president is estimated at $18,000–20,000.