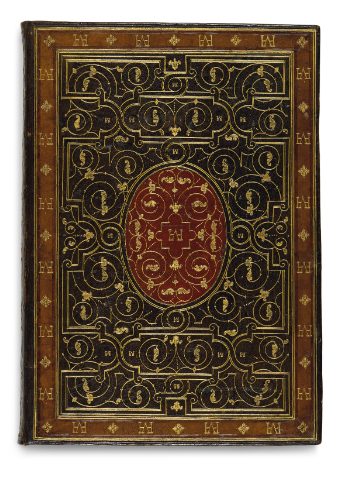 After some very busy weeks in the auction rooms, a bit of a respite for the end of the month.

On Tuesday, November 26, Morton Subastas holds a sale of Libros y Documentos del Porfiriato y la Revolución Mexicana, in 424 lots. An 1804 printed edict about salted meats signed by Miguel Hidalgo is among the top-estimated lots, at $MXN 170,000–190,000, and a collection of twenty-eight photographs by Manuel Ramos of La Decena Trágica (1913) is estimated at $MXN 60,000–70,000.

Also on Tuesday, the first part of Bibliothèque de Martine de Béhague et des comtes de Ganay at Christie's Paris. The 187 lots include a lovely copy of the Desaint & Saillant edition of La Fontaine's Fables choisies, mises en vers (Paris, 1755–1759), illustrated with the engravings of Jean-Baptiste Oudry. These were colored around 1782 and bound at roughly the same time; the binding displays the arms of the comte d'Artois, in this case indicating that the set was likely given as a gift by the count or one of his relatives. The Fables are estimated at €150,000–200,000, as is a copy of Philibert de L'Orme's Premier tome de l'architecture (1567), a large paper copy in in a fanfare binding.

Forum Auctions holds an online sale of Books and Works on Paper on Wednesday, November 27. Lots 1–53 of the 201 lots were the property of the late bookseller Charles Cox. A copy of the 1673 second edition of Richard Ligon's True & Exact History of the Island of Barbadoes is estimated at £1,000–1,500, as is an 1814 satirical etching celebrating American naval victories in the War of 1812, "John Bull making a new batch of Ships to send to the Lakes."

At Christie's London on Wednesday, Russia: Important Books and Manuscripts, in 188 lots. Expected to lead the way are an album of 94 ink and watercolor drawings of artillery weapons and their accessories, likely made for Paul I in 1800 by the Second Cadet Corps and later in the collection of Alexander II; and a full set of the parts of Pushkin's Eugene Onegin with the second edition of Part II. Both lots are estimated at £100,000–150,000.