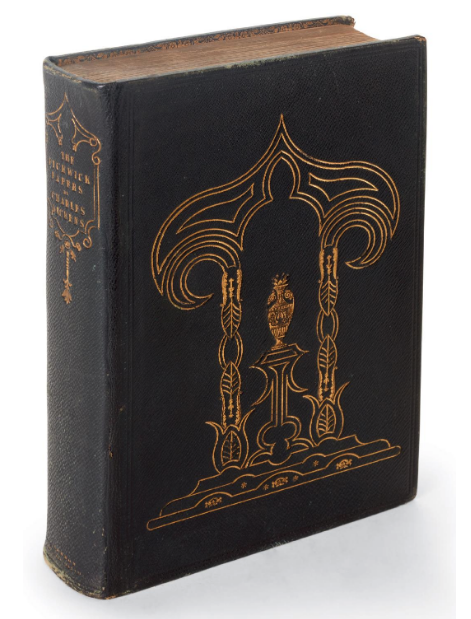 First book edition of The Pickwick Papers in a presentation binding, offered at Sotheby's London on Tuesday.

On Tuesday, September 24, Sotheby's London sells Charles Dickens: The Lawrence Drizen Collection. In a prefatory note to the catalogue, Drizen notes that he's been collecting Dickens material for more than 55 years, and has now "reached the age when the works need to be dispersed to other collectors, old and young, who will welcome the opportunity to acquire such fine books. The sale will be a very sad occasion for me." The auction includes more than twenty-five presentation copies, annotated "reading copies" used by Dickens during his performances, and more. Top lots are expected to be a presentation copy of the first book edition of Pickwick Papers, in an elaborate presentation binding and inscribed to Dickens' friend Dr. John Elliotson; and a dedication copy of the first book edition of Bleak House inscribed to Charles Knight (both estimated at £80,000–120,000). A first edition of The Cricket on the Hearth inscribed to the Count d'Orsay could fetch £70,000–90,000. If you're a Dickens fan at all, though, you'll want to spend some serious time looking through this excellent collection.

Also on Wednesday, Editions and Works on Paper at Forum Auctions, in 466 lots. Forum also sells Fine Books, Manuscripts and Works on Paper on Thursday, September 26, in 247 lots. A first edition of James Joyce's Dubliners (1914), inscribed by Joyce to Beatrice Randegger from Trieste in June 1914, is estimated at £100,000–150,000. The auction house has only traced three other inscribed copies at auction over the last seven decades. An early edition of Piranesi's La Antichità Romane rates an estimate of £20,000–30,000. Another first printing of Harry Potter and the Philosopher's Stone will be on the blocks here, estimated at £20,000–30,000.

PBA Galleries sells 213 lots of Rare Golf Books, Art, and Memorabilia on Thursday, in conjunction with the annual meeting of the Golf Heritage Society at Independence, Ohio. A presentation copy of John Smart's 1893 collection of etchings of Scottish golf courses, A Round of the Links, could sell for $15,000–25,000. Estimated at $8,000–12,000 are a first edition of Robert Forgan's The Golfer's Handbook (1881); Bobby Jones' Down the Fairway (1927); and a copy of the 1891 The Duffers' Golf Club Papers.

Rounding out Thursday's sales, Swann Galleries features Printed & Manuscript Americana, in 329 lots. A large collection of more than 2,000 documents relating to the works of the Dickinson & Shrewsbury salt works in what is now West Virginia, mostly from 1820 through the 1860s, is estimated at $80,000–120,000. Papers from the Shugart family, including a notebook kept by Zachariah Taylor Shugart in which he documents his involvement with the Underground Railroad, could sell for $30,000–40,000. McKenney & Hall's History of the Indian Tribes of North America is estimated at $25,000–35,000. A copy of the Peter Force printing of the Declaration of Independence could sell for $15,000–25,000.

Closing out the week is the Fall Auction at Arader Galleries on September 28, featuring 214 lots. Audubon's wonderful Snowy Owl rates the top estimate here, at $225,000–300,000.