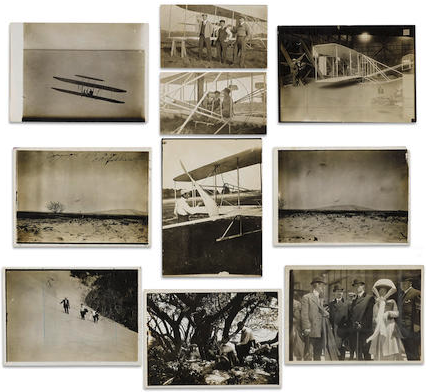 On Tuesday, September 17, Bonhams New York holds The Air and Space Sale, in 156 lots. Expected to lead the way is a rare vintage test model of the Sputnik-1 satellite, at $400,000–600,000. A significant collection of more than 1,300 photographs documenting the aviation industry from its earliest days through the 1940s, collected by Flying magazine editor Henry Woodhouse, is estimated at $50,000–70,000. A 52-page autograph manuscript by cosmonaut Alexei Leonov, written in 1975 about his experiences on the Apollo-Soyuz mission could fetch $20,000–30,000, as could a partial transcript of the first phone call to the moon signed by Nixon, Armstrong, Aldrin, and Collins.

PBA Galleries holds a sale of Cartography – Americana – Exploration – Voyages: The Warren Heckrotte and Margaret Gee Collection (with additions) on Thursday, September 19, in 223 lots. An 1800 atlas of Russia published at St. Petersburg shares the top estimate, at $10,000–15,000, with James Burney's Chronological History of the Discoveries in the South Sea or Pacific Ocean (1803–17). Five lots are estimated at $5,000–8,000, including a copy of the first complete atlas of Russia (St. Petersburg, 1745) and a large-paper copy of Theodore Roosevelt's Big Game Hunting in the Rockies and on the Great Plains (1899).

Also on Thursday, The Collection of Victor Niederhoffer: Books and Autographs and Books, Maps & Manuscripts at Freeman's in Philadelphia. The first comprises 99 lots, including a Thomas Jefferson manuscript letter about the Embargo Act ($30,000–50,000); a 1990 Ronald Reagan letter to his daughter Patti Davis could fetch $15,000–20,000. Another 337 lots will be offered in the broader sale, including a copy of the sixth state of the Fry-Jefferson map of Virginia ($12,000–18,000). A presentation copy of Clement C. Moore's Poems (1844), inscribed to the Prussian envoy to the United States, is estimated at $5,000–8,000. A collection of more than forty documents relating to the Mary Ann Furnace of York County, Pennsylvania, could sell for $4,000–7,000.

Rounding out the week on Saturday and Sunday, 21–22 September is The David and Janice Frent Collection of Presidential & Political Americana, Part VI at Heritage Auctions. As with previous installments from this collection, a fine mix of textiles, buttons, posters, and other campaign memorabilia.