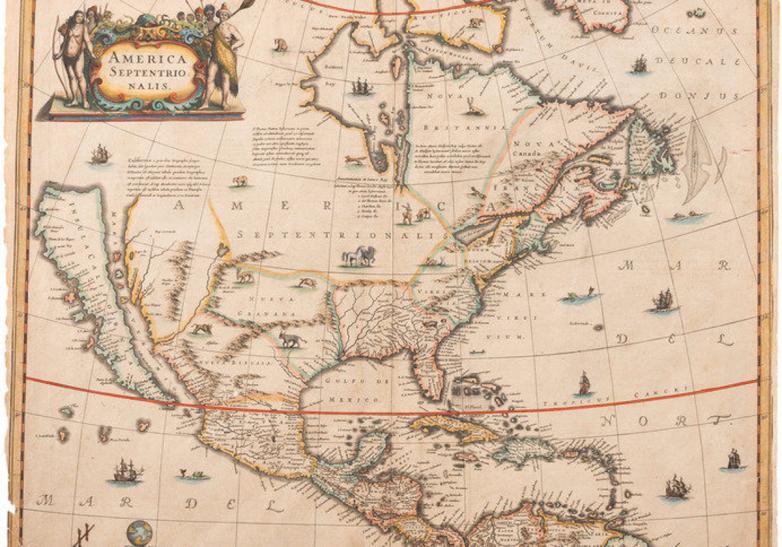 1639 Henricus Hondius map showing California as an island, offered at Hindman this week.

A fairly quiet week coming up; here's what I'll be watching:

Hindman's sale of American Historical Ephemera & Photography ends on Tuesday, August 30. The 306 lots include a set of 66 posters designed by David Singer for the Fillmore West Ballroom in San Francisco from 1969 to 1971. All are signed by Singer and the set is estimated to sell for $8,000–10,000. A 1789 document signed twice by George Clinton as Governor of New York about the process of electing U.S. senators could sell for $3,000–5,000. A 1639 Henricus Hondius map showing California as an island is expected to fetch $2,000–3,000. The same estimate range has been assigned to a collection of 43 documents bearing signatures of members of the Continental Congress, dated between 1764 and 1815. Also included in this sale is a sterling silver presentation box given to Captain James Anderson, who commanded the Great Eastern on the voyage to lay the first transatlantic telegraph cable ($1,500–2,000).

Ending at New England Book Auctions on Tuesday, a 177-lot sale of Science, Medicine, Technology, Travel, &c. A few notable lots include a ten-volume set of the Manuscript Edition of the Writings of John Muir (1916–1924), with a holograph fragment in Muir's hand tipped in; the records of a Vermont asylum for 1882 to 1884; and a WWII targeting album of sites along the northern coast of France.

On Wednesday, August 30, Forum Auctions sells Books and Works on Paper in an online sale. A copy of Percy Shelley's Anacreontis Odaria (1813), with Shelley's signature on a half-title from a different copy tipped in, is expected to sell for £5,000–7,000. Papworth's Select Views of London (1816), one of the copies with Papworth's name on the title page, could sell for £1,000–1,500.