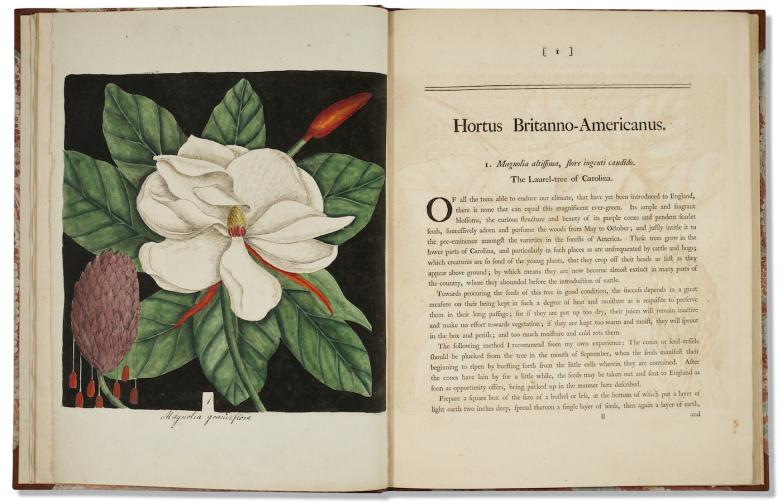 Image from the third edition of Catesby's Natural History of Carolina, Florida, and the Bahama Islands (1771), among the items offered in the sale of William S. Reese's collection at Christie's this week.

Sotheby's online sale of Travel, Atlases, Maps and Photographs ends on Tuesday, May 24. The 111 lots include a large collection of more than 4,000 photographs mostly of Persian portraits and views taken between the 1860s and the 1920s. The catalogue calls this the largest and most important single collection of photographs from the Qajar dynasty to appear at auction, and it is expected to sell for £250,000–350,000. A large collection of the manuscripts of Jesuit astronomer Fr. Antoine Gaubil, formerly in the collection of Sir Thomas Phillipps, is expected to sell for £100,000–150,000. A set of the Aurora Australis (1908–09), in the original packing crate boards and inscribed by the brother of Frank Wild, one of the printers, could sell for £50,000–70,000.

The major sale of the week is The Private Collection of William S. Reese at Christie's New York. The first part of 100 lots will be sold on Wednesday, May 25. Literally every lot in the sale of this legendary bookseller's collection could be mentioned here, but I will highlight just a few. The Copley copy of the broadside Declaration of Independence printed by Ezekiel Russell around July 15, 1776, one of just six known copies, is estimated at $1,000,000–1,500,000. A first edition of John Smith's Generall Historie of Virginia, New-England, and the Summer Isles (1624) could sell for $300,000–500,000, and a second edition copy of the Eliot Bible in Massachusett is expected to fetch $80,000–120,000.

At Forum Auctions on Thursday, Fine Books, Manuscripts and Works on Paper, in 392 lots. John Gould's Birds of Great Britain is expected to lead the sale, at £40,000–60,000. A very rare set of all twelve aquatint views of the Quebec and Niagara Falls area after Major General James Pattison Cockburn (1833) are estimated at £30,000–40,000. This copy is in a contemporary binding.