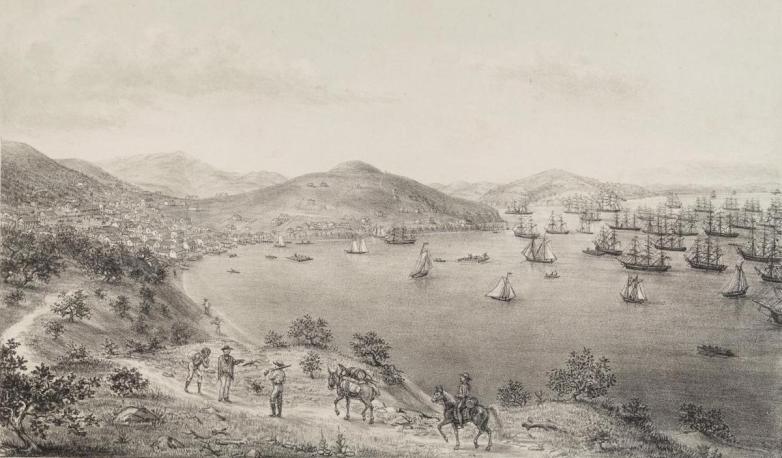 A lithograph of George H. Baker's drawing of San Francisco harbor on June 1, 1849 is offered at PBA Galleries this week.

A 192-lot sale of Fine Books & Ephemera at New England Book Auctions ends on Tuesday, April 19. A typically eclectic range of material in this one.

At PBA Galleries on Thursday, the first part of the Charles Fracchia Collection: Maps & Views of San Francisco and Pictorial Letter Sheets. An 1859 lithograph "View of that portion of the City of San Francisco seen from the Residence of N. Larco, Esqre. Green Street, Telegraph Hill, looking south," from a painting by Eugene Camerer, is expected to lead the sale at $8,000–12,000. A July 1852 bird's-eye view of San Francisco published by Cooke & LeCount, could sell for $6,000–9,000, while a lithograph of George H. Baker's drawing of San Francisco harbor on June 1, 1849 is estimated at $5,000–8,000.

Arader Galleries hold their April Auction on Saturday, April 23. The 162 lots include a set of four continental wall maps (of the Americas, Europe, Africa, and Asia) by Giacomo Gastaldi, these the third states published about 1662 by Stefano Scolari. The four together are estimated at $500,000–800,000. A first edition of Mark Catesby's Natural History of Carolina, Florida, and the Bahama Islands (1731–1743), this from the libraries of François César de Tellier, Marquis of Courtanvaux and the Duke of Sutherland, could sell for $300,000–400,000. Second and third editions of Catesby are also available in this sale. A second edition of Maria Sibylla Merian's Dissertatio de Generatione et Metamorphosibus Insectorum Surinamensium (1719) is estimated at $200,000–300,000.